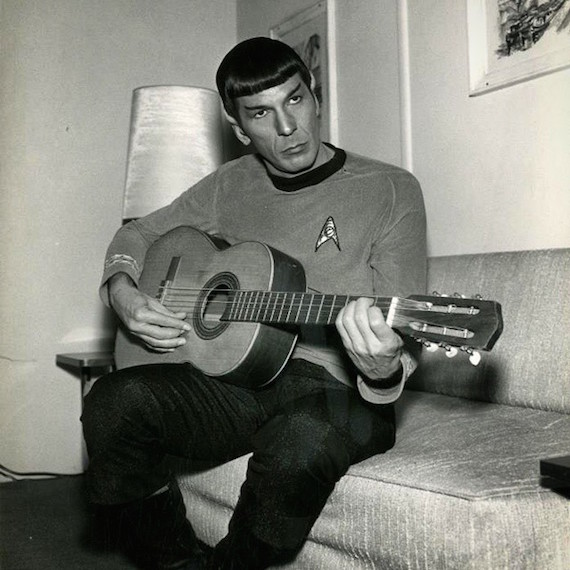 On September 8, 1966—50 years ago today—Star Trek premiered on NBC. Pitched as “Wagon Train to the stars,” the show would go on to reflect the humanist ideals of creator Gene Roddenberry, inspiring a sprawling franchise and introducing (multiple) universes, which at their best reflected Roddenberry’s “Great Bird of the Galaxy” spirit and his directive to “boldly go where no one had gone before.” Its cast was interracial, its themes were timeless, its scope was cosmic.

Most—myself included—don’t think of the music of the Star Trek franchise beyond its various themes and the pop music forays of cast members like William Shatner, Leonard Nimoy, Nichelle Nichols and Brent Spiner (let’s not get into the Beastie Boys thing in recent films—mixed feelings there). But upon recent 50th anniversary revisits, I was struck by the evocative soundtracks of original series episodes, chiefly the music composed by Gerald Fried. Perhaps no cues are as resonant as the deep, twangy songs Fried composed to evoke the inner mind of Spock, the emotionless Vulcan first officer. In an interview with blogger Jimmy J. Aquino in 1999, Fried explained his choice to utilize the bass for the character’s themes. “Spock had a lot of trouble with emotion. If he did have any, he hardly knew how to get it out. Now if you try to play a lyrical line on a big thumpy bass guitar, you’re gonna have trouble sounding lyrical, so I thought it would be a match to write a lyrical theme but put it on the bass guitar. It somehow parallels Spock’s trouble and confusion with emotion.”

Working with jazz guitar legend and Wrecking Crew member Barney Kessel, Fried created a number of haunting melodies, heard in episodes like the essential “Amok Time.” To my ears, it sounds very much like a Fender Bass VI, heard memorably on recordings by Glen Campbell, and The Cure, though it could be a Danelectro baritone. Either way, it’s a singular, evocative sound; a complicated tone for a complicated character. words/j woodbury