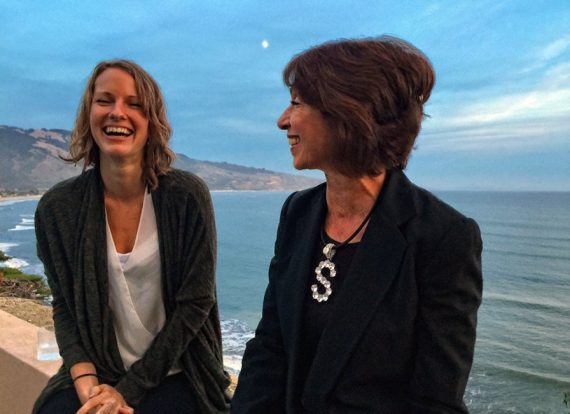 There aren’t a lot of restaurants in Bolinas, a secluded costal community in Marin County, California.

One evening, she was hosting a dinner when she met Suzanne Ciani. It only took them a few minutes to realize their connection.

“We both bonded over being Buchla players,” Smith says.

Of course, Ciani was more than just a Buchla player. A noted sound designer — that was her distinctive “popping” sound in vintage Coke commercials — she was among the first composers to utilize and demonstrate the potential of Don Buchla’s unique synthesizers, which the designer introduced in 1963.

Ciani went on the great acclaim in the new age field, gathering Grammy nominations and influencing younger electronic musicians like Smith, whose bubbling LP Ears is among our favorite albums of the year.

“I didn’t know who I was talking to until it clicked when she asked me what I played, and I answered ‘the Buchla,’ and she knew about it,” Smith says.

When she realized she was talking to an electronic pioneer, she was thrilled. The two became friends and eventually, collaborators. Friday, September 16th sees the release of their debut album as a duo, Sunergy. Part of RVNG Intl’s FRKWYS series, which has united cross-generational artists like Steve Gunn  and  Mike Cooper, and Robert Aiki Aubrey Lowe with Ariel Kalma, it’s an immersive, majestic record, a document of both their friendship and shared melodic approach.

We spoke with Ciani and Smith via Skype. Following, our conversation, which has been edited for clarity.

Aquarium Drunkard: Suzanne, you were one of the first people to help demonstrate to people what the Buchla was capable of. What were your initial thoughts about the instrument?

So I had come along a few years after Mort and by that time Don had crystallized the idea of what he wanted to design. I came under his vision, that this was indeed a performance instrument. My dedication to that machine was to do live performance. The problem was, there were very few outlets for that in my day. Most theaters didn’t have quadrophonic sound and I insisted on having it. I couldn’t make a living doing live performance. I needed money, and I eventually started using the Buchla for sound design [for films, commercials, and video games].

AD: For those of us less familiar with the ins and outs, is the interface of Buchlas different from what people might think of when they picture a synthesizer?

Suzanne Ciani: I think the important distinction goes back to Don’s creation of this as a performance instrument. He created interfaces which are responsive and playable. A lot of the earlier analog modulars didn’t have the feedback system that his did; he had a lot of lights that are very functional, LEDs [which indicate] the intensity of the control voltage or the timing of the pulse. He designed a lot of interfaces that I don’t play – he has a touch keyboard, which I do play – but he also introduced the Marimba Lumina, the Thunder, and Lighting [MIDI controllers], various musical interfaces that are original for interacting.

AD: Kaitlyn, you first began playing the Buchla after being introduced to it by a neighbor. When you started playing it, did you think, “This could be a performance instrument?”

Kaitlyn Aurelia Smith: Not the first one I played, which was a Buchla 100. It’s very bulky, very heavy, and very fragile [laughs]. I never performed with it. It was very unstable; I didn’t turn it off the whole time I had it. If I didn’t record it in the moment, I would have lost it, so I always had my recording set up. I recorded everything. But when I got the Music Easel, that was when I started to figure out its performative nature.

AD: How did your friendship bloom into an artistic partnership?

Kaitlyn Aurelia Smith: Matt Werth from RVNG is a good friend and we were chatting. I told him that I was working with Suzanne, who’d hired me to work in her studio. He’s a big fan of hers, so he presented the idea of us doing a FRKWYS collaboration.

AD: Suzanne, what did you hire Kaitlyn to do in the studio?

Suzzane Ciani: I was getting ready to do a tour. I moved to Bolinas from New York almost 25 years ago. It’s pretty isolated here. I had studio assistance in the past, but it’s hard to find people. So this was a joy to me, to find someone who actually lived in my town who could come by and work with me. [I needed] someone here to help me focus on my work. I get very distracted. [Laughs] Kaitlyn would show up at a specific time, and I could focus on what I had to do. I was just coming back to performing — I had a tour with Andy Votel and Sean Canty from Neotantrik. Things had to be done…she was my support system in getting that tour ready.

AD: Had you already begun experimenting together when Matt came out?

Suzanne Ciani: We never really had our instruments in the same room at the same time, but I’d gone to a performance of Kaitlyn’s in Bolinas. She played at the farm stand and I saw her perform on her Music Easel and thought she was very talented. When Matt came he presented this idea of an older artist working with a younger artist. I felt very mentoring toward Kaitlyn. It took a long time for us to decide to do this, but at a certain point, she was going to move to L.A. and I was going to be involved in something else. We saw there was a window of opportunity…I think it’s rather magical what we came up with.

AD: In recent years, you’ve focused more on piano and a classical approach. Did it feel exciting to return to more impressionistic music with Kaitlyn? These compositions were improvised, correct?

Suzanne Ciani: The nature of performing on the Buchla is improvisatory. I got back into electronics in recent years via the Finder Keepers’ publications of my earlier stuff [the label issued Ciani’s Buchla Concerts 1975, Lixiviation, and her 1982 commercial debut, Seven Waves]. Coincidentally during that time I got a new Buchla. I’d been playing tennis with Don Buchla for 10 years, and I thought of him as a friend, but I never thought I’d go back to the Buchla. It was very traumatic for me the first time around. I wasn’t keen on going back.

AD: What was traumatic about it?

Suzanne Ciani: When you get involved with technology it’s a risky business. It was in the old days. The machine would break and it couldn’t be fixed. I’d send it back to Don Buchla on the West Coast, it would be sent back to me and it’d be broken again. I was so in love with that machine, but then half of it was stolen and I couldn’t replace it. It was a very difficult end to that love affair.

AD: Kaitlyn, have you encountered your own difficulties? Has it been difficult to maintain a relationship with a Buchla as your primary instrument?

Kaitlyn Aurelia Smith: I experience those things in different ways. With the 100, definitely, but with the Music Easel, it’s a reissue of an instrument made in the ‘60s. I’m not taking one from the ‘60s out and performing with it –- there weren’t that many made [to begin with]. I experience a lot of quirks and in-the-moment oddities as I’m performing. Half of my brain will be focused on problem solving an issue, but that’s kind of fun. It keeps you on your toes.

AD: With Sunergy did you have the instruments in a more controlled environment, or were there still elements of that problem solving in the moment required to make this record?

Kaitlyn Auerlia Smith: I think it’s always like that with modulars, would you say, Suzanne?

Suzanne Ciani: I have to say, I think the technology gods were shining down upon us for those three days. [Laughs] We just passed through this without any injury. We had some issues the first day, but after that it as smooth sailing.

AD: What are the surroundings like at the studio? This record –- and your individual works, as well –- seem to have a strong connection to the natural world.

Suzanne Ciani: There’s a big picture window in the studio, so the view we’re looking out on is the sea and a mountain. The sun comes up right outside that window. I had wanted to write [a song evoking] “the sun,” it’s such a magnificent event here — my entertainment is the birds flying by, the ocean, the sun, the moon. I had been frustrated in that attempt – I was trying to do that on the piano until I realized it was supposed to be an electronic piece, that I needed electronics to sustain that energy. The timing was such that for me, I felt like that’s what we were doing. We were writing “the sunrise” and that energy.

Kaitlyn Aurelia Smith: It was very beautiful surrounding us; it was an influence just by being in it.

AD: In “New Day,” there are moments where these sheets of noise remind me of waves or gusts of wind. Did you want to create a contrast, a sense of nature imposing on the sounds?

Kaitlyn Aurelia Smith: Suzanne, do you remember a week before we got together? We did a little bit of brainstorming on your machine. Her machine has memory so you can create these patches and scenes to work with. I remember a conversation about creating a voice which was reminiscent of the ocean coming in.

Suzanne Ciani: I live on waves. I just love them.

AD: Waves are a recurring theme in your work.

Suzanne Ciani: I can’t do anything without waves. And waves become wind, you know. It’s one of those spacial things. We didn’t do this in quad, but I love using quad in a live performance to move the sound. The white noise just comes alive when it moves and represent a certain natural energy that I’m living on and that Kaitlyn’s lived on. It’s not literal — these aren’t literal waves — but they’re conceptual energy forms that refer to natural energies.

AD: I’ve read pieces in which you refer to the “feminine” energy of this record, Suzanne.

Suzanne Ciani: We don’t want to get confused. I think of feminine energy as a very strong energy. I don’t think of it as a weaker energy than male energy, which some people might think. It’s just a different energy. That’s why I relate to the ocean so much: I think that movement of the waves, that steady, consistent, ongoing, purposeful but slow rhythm is a feminine rhythm. In my own mind, I think male energy might be more pumping. I think both energies are rhythmic, but feminine energy might be a slower, more forceful energy. Male energy might just be more like dance music, if you wanted to be extreme about it. I do think the record has a feminine energy. Kaitlyn naturally has that energy, too, not that we don’t have masculine energy as well! We had moments where we put our boy hats on and said, “We can do that. We can make noise, we can be loud.” [laughs]

Suzanne Ciani: Some people have this notion that something that is beautiful is less valid…There’s not a lot of respect for beauty sometimes. words/j woodbury

Below: A documentary about Sunergy by director Sean Hellfritsch