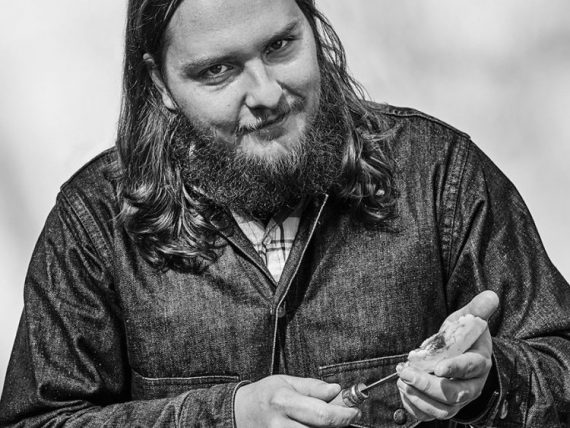 In his review of Nathan Bowles’ latest LP Whole and Cloven for Aquarium Drunkard, writer Tyler Wilcox asks: “Is banjo futurism a thing? Probably not, but if it was Nathan Bowles would be leading the charge.”

Wilcox makes an excellent point. Like his previous solo records have demonstrated — in addition his work with the Black Twig Pickers, Pelt, Steve Gunn, and the late, great Jack Rose — Bowles approaches traditional music with an adventurist spirit. Whole & Cloven, released by the sturdy folks at Paradise of Bachelors, takes his elemental clawhammer banjo approach and expands it outward, exploring dynamic minimalism and driving boogie. It’s centerpiece, the 11-minute “I Miss My Dog” wordlessly conveys an emotional journey. By the time it’s done, you’re not only missing your own dog, but Bowles’ too.

Recently, AD called up Bowles while he was on tour through Virginia with singer/songwriter Jake Xerxes Fussell. Below, our discussion, edited and condensed for clarity.

Aquarium Drunkard: Whole & Cloven is your first record since moving from Virginia to North Carolina, right?
’€¨
Nathan Bowles: That’s correct, yeah. All of Nansemond was written and developed in  Blacksburg. Now that I think about it, the songs on Whole & Cloven were pretty much written in Blacksburg too, and I recorded it last November before moving.

AD: What inspired that move?
’€¨
Nathan Bowles: I have a fair amount of musical friends in Durham. I always liked the feel of the area…it’s got a lot of variety culturally, musically.

AD: Did Nansemond feel specifically tied to the setting of Virginia?

Nathan Bowles: Yeah. All of those songs were inspired by thinking back on childhood and how the place where I grew up had changed a lot geographically.

AD: Does Whole & Cloven feel less tied to a specific place for you?

Nathan Bowles: The songs on Whole & Cloven feel more inward. I mean, I’m trying not to sound cheesy, but [they convey an] inner landscape kind of thing. I guess that record feels introspective in a different way. The songs are things that had been brewing for a while — some of those songs are actually like quite old — but it was also a record about some of the feelings I had knowing I was going to be moving, about a kind of wandering and certain life changes. It doesn’t feel like a geographical record per se. It’s more about looking back on, not just my life in general, but also my musical life. It’s about my musical “career,” whatever that means, which has gotten busier as of late and channeling all the influences that I’ve taken in. I really wanted different elements of my interests and influences to be represented on Whole & Cloven. Hopefully, to a listener it doesn’t sound too all over the place, but I definitely try and access different areas on it.

AD: Is that how you sort of found yourself saying, “Okay, I’m gonna put ‘Chiaroscuro’, this minimalist sort of Steve Reich or Terry Riley piano meditation on this record”?

Nathan Bowles: It was a definite conscious decision. It just felt natural that I wanted things other than the banjo to be foregrounded at different moments. I grew up playing piano, that was my first instrument. So sometimes I think in terms of the keyboard, even if I can’t act it out at any moment. There are some piano elements on some tracks on Nansemond that helped flush out add some depth to some of the tracks. But whenever I’d be in a studio with a piano, that sort of strumming music, minimalist, repetitive thing that “Chiaroscuro” does is something I would do.

AD: A lot of people have probably have seen you playing drums with Steve Gun recently. One thing I find interesting about this record is how percussive your approach to the banjo is.

AD: You’ve played a lot with the Black Twig Pickers, studied traditional American music and string bands. Did that inform your rhythmic approach to the banjo?

Nathan Bowles: For sure. Particularly in old time music, the clawhammer-style banjo is definitely a heavy rhythmic element. Obviously, there’s a lot of different takes on that depending on regional variations. Not everyone in old time clawhammer banjo music plays as rhythmically fronted as I do, but generally, yeah. I have a proclivity for wanting the banjo to be as drum-like as I can make it.

AD: You sing on “Moonshine Is the Sunshine,” the only vocals on the album aside from a few breaths here and there. What drew you to that song?

Nathan Bowles: A bunch of my friends are into those Jeffrey Cain records. Jason Meagher, who owns Black Dirt Studio and is in Gunn’s band too, he played me that record on tour on his iPod. I was familiar with that scene, those Youngbloods records, but I didn’t really know some of the Raccoon Records he made, and I was just charmed by them. I don’t know what made me decide to start singing it. I don’t sit around my house and sing songs. It doesn’t happen. I don’t have a repertoire of a bunch of songs I like to sit around my house, drink a beer, play banjo, and sing. I sing in the context of Black Twigs, we do a fair amount of singing songs [but] when I do sing, it’s usually traditional numbers. But that seems different than singer/songwriter singing. I like a fair amount of singer/songwriter stuff, but I’m never inspired to do that. To me, “Moonshine Is The Sunshine” is practically a folk song; I think the reason I started playing it at home is because it felt like a folk song. Something about it feels like it’s almost cobbled together folk verses. Singing it just felt natural.

AD: “Burnt Ends Rag” was inspired by in part by your time and friendship with Jack Rose. How did you meet Jack? What was he like? The legend sort of looms large when people talk about him.

Nathan Bowles: He was a super unique personality. I meet people that have elements of his personality, but no one all wrapped in that bizarre, kind of iconoclastic package. Jack just kind of carried a weight around with him; he was just so steadfast, unwilling to take any shit about his positions and what he felt was true in the universe. I met him through Mike Gangloff in Black Twigs because Mike and Jack were band mates in Pelt for a long time. The Twigs did a record with him, and we just kind of hit it off. He was so pure in his musical vision and so funny. Just like so fucking funny. He could be infuriating at times, but he was so fun to hang out with. I only knew him about three years or so, but we got to play a lot of music in that time. It’s been really interesting to see how after his death, so many of my peers kicked their game up.

AD: Sort of stepping up to the plate in his absence.

Nathan Bowles: It’s frustrating too, because it’s like, “Fuck man, Jack just missed it.” I have this thought like, “Oh, he just missed all these things happening. But then at the same you’re like, if he was still around, what would be different, you know? I think about him all the time. I’ll be listening to something or watching something, probably once a day, and I’ll think, “Man, either Jack would really be into this or Jack would think this is the dumbest shit ever.” He was self-contradictory. He would flip flop and would super surprise you on some stuff. Then, something he thought was bullshit at one point, he’d come around on. If you tried hard enough, you could argue for something and he’d come around on it. He was really funny like that.

AD: The cover features a painting of a bull by artist John Henry Toney. How does Toney’s bull relate to these songs?

Nathan Bowles: Maybe in a self aggrandizing way, I felt like the songs taken as a whole illustrated something about what I’m like as a person and a musician. Tonye’s bull is split in the middle. It illustrates that I can often times be pulled in a lot of different directions, that I’m split and of two minds about any one thing at any given time. A lot of times I can be super indecisive. I’ve always liked things in twos and threes. I just liked the balance of the title, it had a nice alliteration in it. It seemed to say something about both the music, both the variety of the music, and also maybe my personality as a player and as a person. words/j woodbury