(In October of 2008 we flipped the script on our Sevens column with Politiko, focusing solely on political songs until the general election. It’s now 2016…and we’re back.) 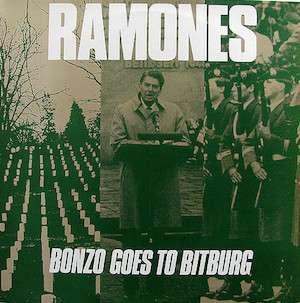 In the spring of 1985, fresh off his landslide re-election to the presidency, Ronald Reagan planned out a visit to a West German military cemetery with then-Chancellor Helmut Kohl. For Reagan, this was a chance to show appreciation for Kohl’s continued support in the placement of nuclear missiles in his country as the Cold War had pushed on. It was near the 40th anniversary of V-E Day, and since Reagan was already going to be in West Germany for a G7 summit, Kohl felt it would make for a good way to begin to show the reconciliation of the two countries. Kohl suggested a visit to the Kolmeshî¶he Cemetery in nearby Bitburg as well as a visit to a concentration camp.

What Reagan’s aides initially missed in planning out the visit was that the cemetery included the graves of 49 members of the Waffen-SS, the armed wing of the paramilitary inside Nazi Germany. As a result, a furor erupted ahead of time about Reagan’s visit, especially since he initially planned to pass on visiting the concentration camp. Reagan tried to help his cause by stating in his defense that a good number of the SS soldiers were drafted against their will. “They were victims, just as surely as the victims in the concentration camps.” This comparison didn’t go over well with those already angry about the visit.

This entire situation even got to a group of musicians not known for expressing their political opinions in their work. The Ramones had just released their eighth studio album the previous fall, 1984’s Too Tough To Die, but even so, decided to record a song to be released as a single. The result was “Bonzo Goes to Bitburg.” Penned by Joey Ramone, Dee Dee Ramone and Jean Beauvoir, the song took aim at the specific incident of Reagan’s visit to Bitburg, but also of some of the broader themes of his presidency.

The title, of course, references one of Reagan’s more famous vehicles during his time as an actor: Bedtime for Bonzo. Bonzo was Reagan’s co-star chimpanzee, but here their identities get commingled while also playing on the title of another later Bonzo film, Bonzo Goes to College. In an August 1986 article in Spin, Joey Ramone was quoted about the Bitburg incident. “We had watched Reagan going to visit the SS cemetery on TV and were disgusted. We’re all good Americans, but Reagan’s thing was like forgive and forget. How can you forget six million people being gassed and roasted?”

Joey was himself Jewish and that couldn’t help but inform his perspective on the matter. Reagan did, by the time of the visit, agree to actually go to the concentration camp as well, though it was a little late to ward off some of the criticism as more than half the members of the Senate and House of Representatives had signed letters either asking Reagan to cancel his visit or for Kohl to rescind the invitation.

The single was released in June of 1985, a really quick turn-around for the band, but their record label only ended up releasing it in the U.K. and not the U.S. It did find a place on the Ramones’ next album, 1986’s Animal Boy, but with a slightly different title. Guitarist Johnny Ramone, a fairly staunch conservative, didn’t love the criticism of President Reagan and pushed successfully to have the song’s title changed to “My Brain Is Hanging Upside Down (Bonzo Goes to Bitburg)” for the album release. The song ended up having a pretty long life for the band, appearing on the gold certified, 1988 best-of compilation Ramones Mania (where its title reverted to “Bonzo Goes to Bitburg”) and the 1991 live album Loco Live (where the title again changed to “My Brain is Hanging Upside Down”).

In the years following Reagan’s death, it’s been typical to see his legacy white-washed a bit and held up as an example of premiere presidency, but the 80s were a high time for government criticism – this wasn’t even the only song about the Bitburg incident released by a fairly major artist – and though it remains pretty much the only explicitly political song in the Ramones’ catalogue, if you compiled a collection of the era’s Reagan-critical songs, this one would definitely belong near the top. words / j neas