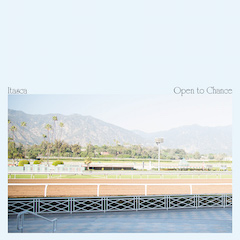 Given the time of year, the temptation with Itasca’s  Open To Chance  is to call it the perfect autumnal soundtrack. But the truth is, it would sound just as good had it been released in April, or July or February. Singer-songwriter-guitarist Kayla Cohen has been releasing spare acoustic music under the Itasca moniker for a few years now; for her Paradise of Bachelors debut she’s recruited a supporting band, including Dave McPeters whose gorgeous pedal steel playing provides a perfect counterpoint to Cohen’s intricate fingerpicking patterns.

The album nods in the direction of the classic Laurel Canyon sound of the early 1970s — Neil Young, Joni Mitchell, Judee Sill — while also incorporating a distinctly Britfolk vibe, recalling the intimate pastoralism of Bridget St. John or Nick Drake. Cohen’s voice rarely rises above a whisper, but it’d be a mistake to describe it as “wispy,” I think. There’s a power and authority to every moment here, whether it’s the wide-eyed reverie of “Buddy” or the heavy fog that seems to drift across the sonic landscape of “Bonafide.” words / t wilcox