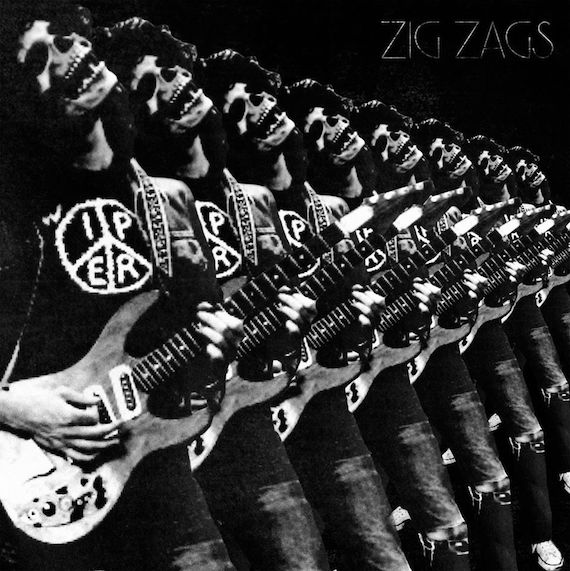 Diversions, a recurring feature on AD, catches up with our favorite artists as they wax on subjects other than recording and performing. For this installment (Halloween appropriate) we catch up with Zig Zags‘ Jed Maheu as he runs down a brief history of rocknroll’s boogeyman mascots. All hail the Boognish.

When I was growing up outside of Portland, Oregon I had a babysitter named Randy. He was your typical 80’s hesher. He gave me cassette tapes of early Def Lepard, Ozzy Osbourne and even Eddie Murphy’s Raw. His older buddies drove Novas and sometimes they would come pick us up in the trailer park we lived in and drive us to the Clackamas River. There was a spot called there called High Rocks where everyone used to party. While the older guys hung out with chicks and smoked weed and drank, I would try to entertain them by jumping off the rocks into the water. One time I was standing on the bridge overlooking the water and some dick on a BMX ala Over The Edge tried to mow me down. Randy reached out and grabbed me by my shirt and yanked me out the way. “That’s not cool fuckhead! He’s just a kid” Randy said to the dick. Years later when trying to come up with a name for the Zig Zags mascot, Randy just seemed like the perfect handle for our version of Eddie. I hope the real Randy is doing good these days, as that was a long time ago, but in his honor he has been re-imagined as a skull faced, metal/punk hybrid from the other side — and although a frightening visage, he’s ultimately a force for good against the evils of anyone not willing to have a good time. Below, Randy joins Heaven’s Gate.

This is the story of the other “mascots” that have influenced Randy over the years . . .

Iron Maiden – Eddie: My first Iron Maiden album was Somewhere In Time. The cover depicts Eddie as a futuristic outlaw. I always imagined him as a bounty hunter here. He had been a killer before and a soldier as well. That’s the great thing about Eddie. He is so many things to so many people. I got the album as part of one of those Columbia House deals where you buy 8 cassettes for a penny. Eventually my mom caught on when they said I owed $14.99 for a Motley Crue (ewww!) record. She had to call and tell them I was only a kid and had no business venturing into a music-by-mail deal at such a young age. Being 8 years old at the time I kind of thought Iron Maiden was weak compared to Metallica and Slayer, but as the years go by I find myself listening to them more and more and appreciating the musicianship and the melodies that were lost on me as a young turd. Plus Eddie is the coolest mascot of all time. 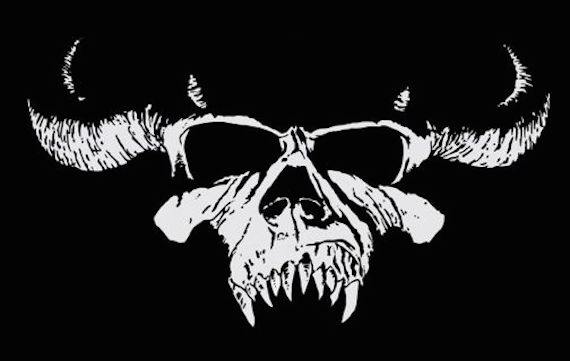 Danzig – Crystar: Danzig always names shit weird stuff that doesn’t make any sense (try to pronounce “Samhain” the right way). Anyway I gotta admit that I didn’t know this fucking thing had a name much less that it was called Crystar. That sounds like some annoying Danish guy one of your female buddies just started dating. I would have called it “Devil Skull” or maybe just “Steve.” I looked it up and it’s an image from an obscure Marvel comic book which makes sense cause Danzig loves comics. Every comic except the one where he dates Henry Rollins. Anyway, I think I first really got into Danzig when the live “Mother” video came out. I knew he was the guy from the Misfits but that was about it and when that video came out there was nothing else like it on MTV and it ended up being on like the Carson Daly countdown or some shit. Danzig wears the Crystar belt buckle in the video! 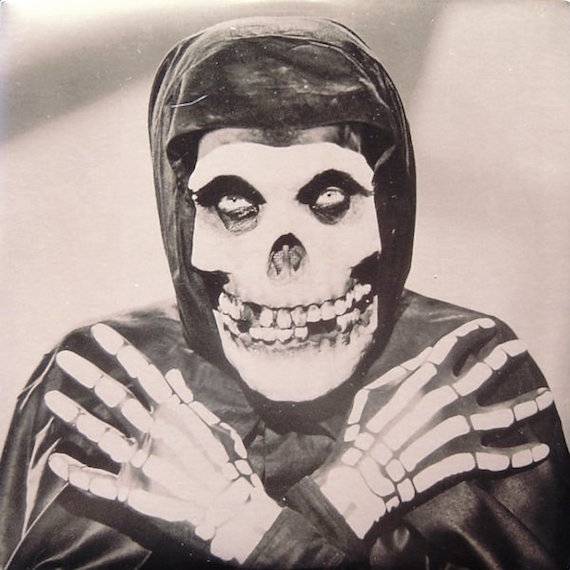 Mifits – Crimson Ghost: This one is more obvious, as it’s from the 1940’s film of the same name and the bad guy “Crimson Ghost” wears the mask that is most associated with the Misfits artwork. I always wondered why it was called Crimson cause there is nothing fucking red about it and also it’s a skull, not a ghost. Danzig! I scream to myself in frustration late at night sometimes. My first time seeing the image was when I saw Cliff Burton from Metallica wearing a Misfits shirt. It took some digging (pre-internet) for me to figure out who the Misfits were and when I realized they were “punk” I was super confused as to why a metal dude would be wearing a punk shirt. Oh well, I don’t think anyone will ever really understand Danzig and I think he likes it that way and I gotta respect him for that. I love early Misfits footage and recordings where you can tell they put more time and effort into their look than the songs. Plus it’s really fun to sing “Hatebreeders” in people’s faces when you’re drunk.

Motorhead – Snaggletooth: Snaggletooth represents A. Lemmy B.some kind of weird pig C. meth addiction or D. All of the above. Regardless the image is up there with the Misfits “Crimson Ghost” as t-shirt most likely on the guy you don’t wanna fight at the show.

The first time I saw Motî¶rhead was on Headbanger’s Ball. This was around the time Alice ‘n Chains were being played on there and metal and hair metal and grunge were all at war with each other. Then I saw Motî¶rhead and it dawned on me that you could be into Metal and Punk! I remember going to see Motî¶rhead with The Dwarves about 15 years ago. I was hanging out in the parking lot with my friends when I noticed two groups of people. One was your classic suburban heshers, ya know, long hair, metal shirts, white high tops and the other was a group of spikey haired (what we called) “street punks” at the time. I went over to both groups and asked if we could all take a photo together. The photo ended up in Seattle weekly paper the Stranger and pretty much epitomizes the fact that all Punks and Metalheads can agree on one thing. Motî¶rhead! 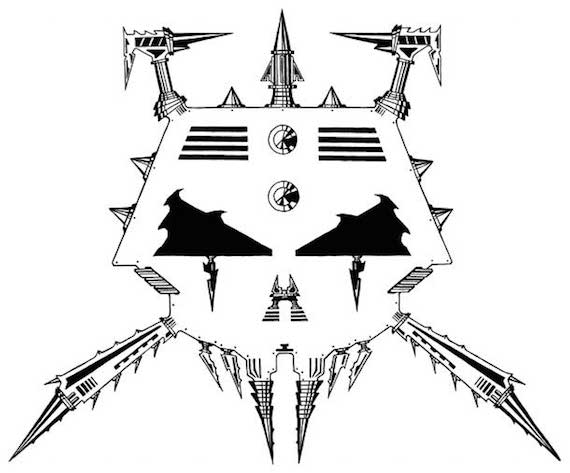 Voivod – Korgull: Voivod is probably one of the biggest influences on me currently as they do metal in an uncompromising and original way drawing from a wide range of influences such as Hardcore Punk, NWOBHM and progressive classics like Pink Floyd and King Crimson. Plus I always thought the drummer “Away” had the coolest name in Metal. Away also designed all the band’s artwork including Korgull who is like some weird cyborg thing that looks like he’s 50% metal and 50% not giving a fuck. I like to think that Korgull is the manifestation of all things evil and wrong reverse engineered as a weapon to defend good. Not super sure though since these dudes are French Canadians. 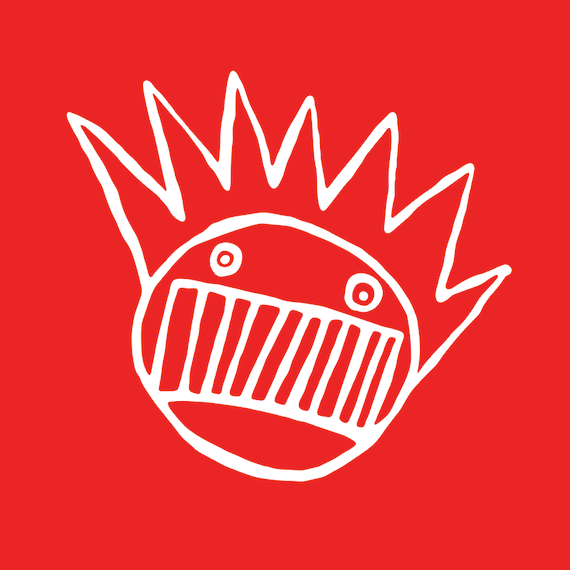 Ween – Boognigh: “The Boognish is a Demon God who has appeared thrice to the prophet brothers Dean and Gene Ween. It resides somewhere outside the orbital buffer. Tradition has it that this entity holds a scepter in each hand: that of wealth and that of power.”

So says Ween themselves and who am I to argue. I used to listen to Ween a lot when I was supposed to be going to college. Instead I was hanging out in a basement watching Monday Night Raw while the real college students stopped by to score weed. My roommate Owen and I would usually put on Ween during the commercials or after Wrestling was over and everyone was thoroughly baked. Ween is like a lot of people’s Grateful Dead. You either love them or hate them and when you find someone you didn’t know likes Ween you are instantly friends por vida. The Boognish looks like my face while stoned watching pro wrestling. 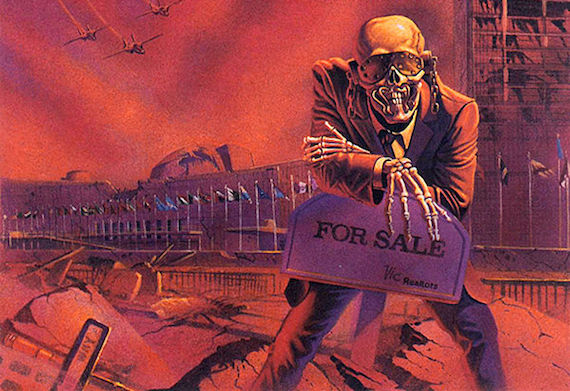 Megadeth – Vic Rattlehead: I have always felt like Vic Rattlehead was Mustaine’s version of Snaggletooth, like how Randy is my Eddie. Obviously Motî¶rhead were huge influences on Mustaine and Metallica and metal in general. I do feel a bit torn by Megadeth. On one hand Dave Mustaine wrote a lot of my favorite Metallica songs and I do sympathize with the guy. Getting kicked out of the biggest metal band of all time has got to weigh on you psychologically. That being said I’ve never been able to get fully into Megadeth, maybe it’s the constant line-up changes or shifts in style, but my interests have waned over the years. Much respect to Dave though for being the fighter that he is and also the fact that he is relentless when it comes to playing fast! I have an old bootleg tape where he talks about GBH being an influence on the speed of Megadeth’s playing. He also has to tell his boss that he will stay after for work since he’s giving an interview on the phone. I been there Dave! God Bless ya!

The Descendents –   Milo: Now for something completely different! Gotta say The Descendents were just as big an influence on me as any gnarly punk or metal band. They basically invented pop punk as far as I can tell and that’s not really a bad thing. My best friend in High School was obsessed with the band and would correspond with Milo through the mail. I think the nerdiness of Milo and his songs about being the guy the girls always ignore was relatable to a lot of dudes in junior high and high school. A lot of metal kids covered up their insecurities with D&D and and tough guy posturing while Milo and the Descendents embraced their awkwardness and made it cool to be a nerd. It took about 30 years but now you see fucking nerds everywhere and nothing is more nerdy than the Milo logo. He’s been everything from a baby, a college student, to a 50 year old man and a chemist! Dorks unite!

Elsewhere: The Fight to Save America From Satan’s Subliminal Rock Messages

4 thoughts on “Monsters of Rock: A History of RocknRoll’s Boogeymen Mascots”