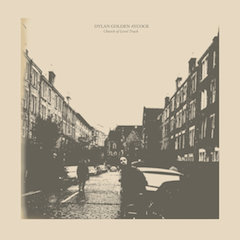 Dylan Golden Aycock has been running the Scissor Tail Editions label out of Tulsa, OK for several years now, releasing treasures both old (Bruce Langhorne’s incredible Hired Hand soundtrack) and new (Chuck Johnson’s masterful Blood Moon Boulder). Aycock steps out from behind the scenes for Church of Level Track, his debut full-length, and ably proves himself worthy company for the artists he’s showcased in the past. Indeed, in the album’s seven tracks, you can hear an extremely pleasing blend of Langhorne’s widescreen Americana and the Takoma School leanings of Johnson, with a few more tasty ingredients thrown into the mix. Each song is a jewel box of subtly shifting textures and moods centered on Aycock’s expert fingerpicking, and layered with dreamy pedal steel drifts, percussive touches and interlocking arrangements. Church of Level Track switches between crystal clear visions of the country and pleasingly disorienting and dissonant moments, Aycock guiding us through the journey with a sure hand. An album that keeps on giving. words / t wilcox

Dylan Golden Aycock :: Lord It Over

One thought on “Dylan Golden Aycock :: Church of Level Track”