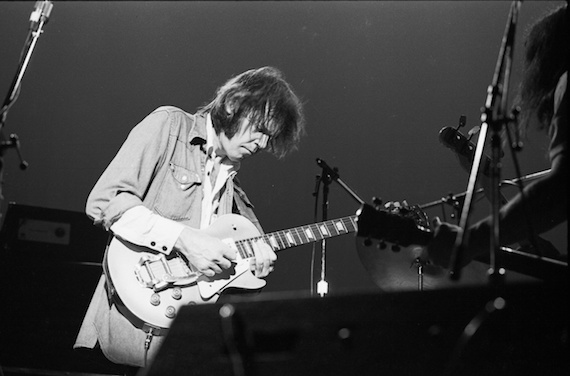 Neil Young took Crazy Horse out of the barn 40 years ago this month for a coast-to-coast US tour. Here’s the semi-official account, via Jimmy McDonough’s Shakey:

Joel Bernstein was shocked to discover that the audience was just as wasted as the band. “It was just a bunch of kids drunk and on reds for the first time. Not just beer and pot — it was reds and vodka, tons of beer. You’d look over at people who were vomiting on the red velvet seats. I think Neil was too fucked up to notice.” Bernstein was equally appalled by the crudity of the new Horse ensemble, believing it lacked the rhythmic finesse of the original lineup. “I’d marvel at the degree to which the band succeeded in bringing down Neil’s every attempt to soar,” he said.

Sounds like a trainwreck, right? I wasn’t there, of course, but the tapes tell a different tale. The November ‘76 tour is filled with incredible, raw performances. Crude? Sure, but who doesn’t love crude Crazy Horse. This is a trainwreck you want to be a part of.

Neil’s opening acoustic sets are fantastic, with a big helping of then-new or unreleased tunes like “Pocahontas,” “Campaigner,” “Give Me Strength,” and “No One Seems To Know.” For the best representation of Neil solo in late ‘76, go straight to Joel Bernstein’s own compilation, The Bernstein Tapes, which have been bootlegged for decades now, and feature some wild monologues in addition to the music. The ghost of Judy Garland shows up in Fort Worth.

There are also plenty of full shows – varying in terms of sound quality, but all pretty thrilling – especially when Crazy Horse joins Neil.  Check out the Berkeley show, with a definitive electric  “Peace of Mind.” Or  the Madison gig, which includes an insane 17-minute “Like A Hurricane,” during which Neil puts down his guitar and starts pounding on the piano.  Neil’s 31st birthday at Chicago’s Auditorium Theatre  gets very loose. “I’m like Baskin Robbins now,” Neil says, already sounding fairly toasted in the opening acoustic set. There’s plenty of howling at the moon going on here. A few days later, the gang hit NYC, sending “Cortez” dancing across the water and dragging out a truly wasted  “Helpless.” 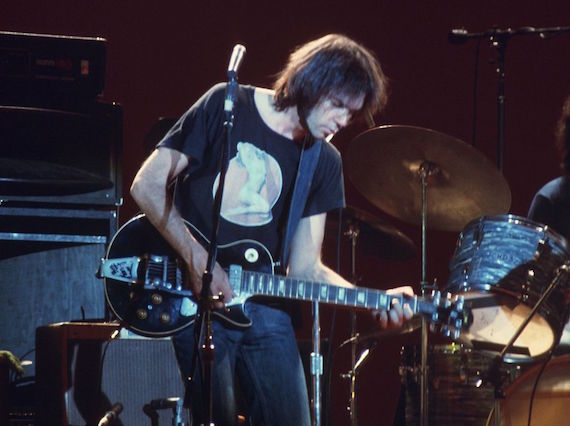 Neil’s guitar playing is amazing throughout the tour, always on the verge of collapse, but finding piercing transcendence with mind-boggling regularity. That  Zuma  sound at its peak.  In Boston,  “Country Home” blazes and  “Down By The River” cuts deep. Then there’s the tour-closing Atlanta gig (listen  here  or  here), with Neil sounding very strung out, but brilliantly so. Not sure if his live show was ever this on-the-edge again … Take a break from the current madness and listen in to some of the good kind of madness. words / t wilcox