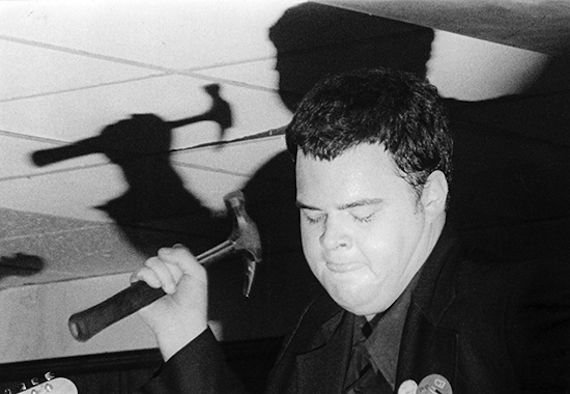 Over forty years in the game and Pere Ubu is still a work in progress. When Aquarium Drunkard spoke with founding member David Thomas this past week, that much was clear. “I work ten years ahead of time,” Thomas says at one point during our talk, which is why it’s surprising, on some level, to see Pere Ubu out on the road to promote two recent retrospective box sets: Elitism For The People: 1975-1978 and Architecture Of Language: 1979-1982. They’ll be hitting the West Coast of the U.S. with shows starting December 2nd and a December 9th stop at The Echo in Los Angeles, all featuring music solely from the two collected sets. Why would a band still focused on its next artistic statement spend time in its past? Thomas spoke about that as well as his finely honed compartmentalizing, baseball as a metaphor for loners in art, how culture doesn’t exist, and his humbleness before an irrelevant audience. Trust us. You’ll want to dig into this.

Aquarium Drunkard: Pere Ubu is getting set to do the West Coast leg of its Coed Jail! tour promoting the two new box sets. What was the logic behind the grouping of the box sets? [The first contains early singles through Dub Housing, the second New Picnic Time through Song of the Bailing Man and other material.] The personnel was different between the sets of years…was there another logic behind breaking the albums into those groups?

David Thomas: Well, because they were two distinct groups. I’m not really sure how to explain it any simpler than that. It was never desirable to release all the box sets as one 30 album package. That was never going to happen. You have to divide things up. So I decided to divide them up according to – I don’t know how to explain it. They’re linked albums. The first box set is Hearpen [Records singles], The Modern Dance and Dub Housing – that was all one thematic line for the band. At the end of Dub Housing it’s generally accepted that we were off on the next adventure, you know, the next theme, the next project. That encompassed New Picinic Time through to …Bailing Man.

All the boxes are thematically linked. I’ve often been asked ‘is this a conceptual album?’ And I say ‘no, our entire damn career is a conceptual career.’ I work ten years ahead of time; I work to a plan. It used to be a five year plan and it soon developed into a ten year plan because things got more ambitious. The next box is from Ray Gun Suitcase through to St. Arkansas. Those three albums were conceived – for want of a better word – as a trilogy. I determined I was going to write the great American novel and that’s what that was. The next set of boxes is also thematically linked together and the Fontana box [albums released during the band’s tenure on Fontana records] – which the rights have been secured for release, so it’s beginning to be put together and all that nonsense – that, too, is inextricably linked. They’re a package.

David Thomas: Because normally when we do an album, it comes out, we tour and then we don’t do anything for two years as we prepare the next album. So instead of not doing anything for two years, we’re going out promoting these box sets and playing this material that is part of who we are. It’s really not a very complicated idea. The opportunity came along to actually do something between albums instead of disappearing for two years.

AD: Does going out and working on this and recreating the older material live have any sort of indirect affect on the new material you’re working on as well?

AD: Would it possibly go the other way? Would the new material you were working on have an effect on the recreation of the older material in a live context?

AD: On the Pere Ubu website there’s the mention of the band’s motto – which is in Latin, but translates to “Art is forever; the audience comes and goes.”

David Thomas: Which if you’re really clever at Latin, it’s an implication that [the audience] runs away. [laughs]

AD: With the band, in some ways, with the exception of you, the artists have come and gone…

David Thomas: The current band, with the exception of one person, has been together longer than 20 years. The damn Rolling Stones haven’t even done that. The point of a lot of this is, we don’t care about the audience. We don’t do this for the audience. We don’t do this to be pop stars. We do this because we had a vision when we were young. And the people who came along later who were not original members grew up on the vision. So we pursue the vision. The audience is an irrelevancy. We don’t do this backs-to-the-audiences, nasal-gazing [sic] sort of thing that came into vogue for awhile. We’re very entertaining and communicative and all that. But it frankly doesn’t matter.

What we are doing is pursuing – we do this to prove ourselves as men. And that’s kind of all there is to it. It’s really simple. And the audience gets to come along and watch people on stage create something that could fall apart at any moment; it’s actually creativity happening in the moment with passion and fire and vigor and an utter commitment to ‘this is what we do and screw you if you don’t like it.’ I don’t mean to be that blunt about it; people don’t like to hear that sort of stuff because you’re supposed to be all ‘we’re all one community.’ Well, screw that. No we’re not. We’re on stage and you’re watching us and we have an obligation to deliver the goods and not wimp out on you. And that’s what we do. And if we don’t deliver the goods, then we come back stage – because there are nights where you just fail – then we come back and we’re utterly crushed because we failed.

There’s no such thing as culture. Culture doesn’t exist. It’s a hoax. it’s a damn hoax. Every bit of progress of human kind in the arts, science, technology, or politics or anything you want to break it down to has come from loners. If cancer is ever cured, it’ll come from some ridiculed loner working in his basement, people laughing at him. Sometimes loners run into other loners and sparks happen and the loners get together and they make something happen. Those things are always volatile. There are people who talk about the Cleveland scene we came out of and it was brutally volatile because it was made up of loners.

You ask ‘how can loners work together?’ Well, baseball is a perfect example. Baseball is the beautiful game that pits one team of loners against another team of loners. Baseball at its root is an individual competition at each stage. The batter versus the pitch. The fielder versus the hit ball and on and on. It’s not that loners don’t cooperate or can’t cooperate, but they only cooperate on their own terms. Name one accomplishment that has come from corporatism. Nothing. Nothing in the entire history of humanity. Nothing. It’s loners. And we’re the king of the loners. [laughs]

AD: I saw a promotional video with a snippet of an interview and you said that all the audience has to do is stand there and that even applauding just gets in your way.

David Thomas: It slows my timing down and it gets to be very annoying at times and I tend to start talking at the end of a song so they can’t start applauding. The one critical feature of an audience – as we learned from Einsteinian Relativity – it’s the role of the observer. Talk to any musician ever and they’ll tell you that the first moment in the first nanosecond of playing a new record for a third party – the first moment you put the needle on the record or push the play button – for the first time, you, the musician who created the work, hear it. Because there’s an observer in the room. And an observer changes everything.

That’s the role of the audience. It’s an important role, but all they have to do is stand there. They don’t have to do anything. We appreciate it when they applaud and all that sort of stuff. We’re not crazy people. We’re just brutally realistic about this stuff. I’ll tell you the truth. Bruce Springsteen thinks the same thing. He knows the same thing I know, it’s just that he won’t tell you.

AD: Would you rather be interpreted the way people go into a museum? You don’t applaud a painting, obviously, so it’s like watching a performance, observing in silence, thinking about it and walking away thinking about it at the end.

David Thomas: Well, we’re a rock band. That’s why rock is such a wonderful example for expression because it can combine physicality with an aesthetic sense of something. Strangely enough, that’s always been our rap – we’re too art for pop fans and too pop for art fans. But that’s the strength of rock music. So yes, we’re delighted – people can do what they want. It tends to be a bad idea to try and interrupt me because my voice is louder, even without a P.A. system, than any of theirs. And it just throws me off that they’re going to lose out on some fascinating story I was about to tell them. [laughs] The band groaning behind me saying ‘David, just play the next song.’

If you’re a slave to an opinion – if the audience really matters to you, what they think – you’re never going to be your own man. You have to be your own man. My manager keeps telling me ‘don’t talk about that stuff – people get the wrong end of the stick.’ But I don’t care. When I have ever listened to anyone?

It’s hard to explain this stuff, because no matter how sympathetic you are personally, as a writer, to this idea, you’re going to describe it in ways that people are going to think that I’m big-headed and arrogant and all that. No. I’m humble before the audience. I’m humble before the experience. I owe the audience and that comes from early years of playing in working-man bars, steel worker bars, where you knew the people were coming in spending their hard-earned wages on you. And you have an obligation to deliver the goods. Not that you have an obligation to do some stupid pop song just like some stupid group that recorded it. But you have an obligation to do your best and give it hell, honey.   words / j neas