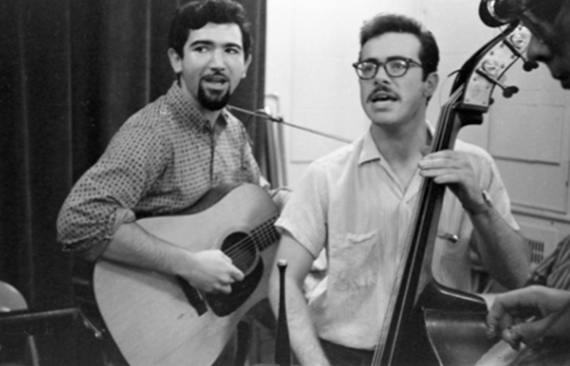 “My name is Jerry Garcia. I play banjo on the old-timey songs and guitar on the bluegrass songs. And do a lot of lead singing too. Which I am not proud of.”

With a bit of self-deprecation and a guffaw we pay witness to the earliest known studio artifacts of Jerry Garcia. A scant 20 years old at the time, Garcia’s group (the formerly named Thunder Mountain Tub Thumpers) included future Grateful Dead lyricist Robert Hunter (on upright bass) and New Riders of the Purple Sage co-founder David Nelson (on guitar). Recorded in 1962, at Stanford University’s KZSU studio for the station’s Folk Time program, the lost session resided in producer Ted Claire’s closest for nearly 50 years before being unearthed in 2008.

Employing Harry Smith’s Anthology of American Folk Music as their guidebook, the 17-song session captures Garcia and cohorts attempting to both echo their elders and refine their chops as professional musicians. Though juvenile only in their playing hours, all 5 members (Ken Frankel on banjo, fiddle, and guitar and Norm Van Maastricht rounded out the group) pour their hearts out, with their youthful fumbles and follies only adding to the character and charm of the session. While traditionalists might cover their ears and decree blasphemy, these recordings (especially “Sitting On Top of the World” which would find itself frequently played by the Grateful Dead) are a true testament to the evolution of Garcia’s career. Only a few short years later he would blend his bluegrass and jug band roots with the electric fury of American and British Rock ’n’ Roll and like they say – the rest is history. words / d norsen

Hart Valley Drifters :: Sitting On Top Of The World