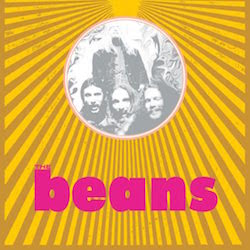 With flowers tucked behind their ears and thumbs pointed West (cue music…) the youth of the mid-60s were hip to turn on, tune in and drop out. The high desert residents of Phoenix, Arizona were no strangers to the unearthly vibrations that were coming from the Bay Area. Local freakazoid Bill Spooner, later of The Tubes, was quick to channel that energy into a series of early psychedelic outfits including The XL’s, Oat Willy and the Dream Band and local celebrity Mike Condello’s aptly named band Condello, who released their debut tripper Phase 1 in 1968. During a sojourn to Los Angeles, things went sideways for the Condello’s with the band crumbling leaving Bill to return home and assemble the Beans. Featuring Bill on guitar the group also included Vince Welnick (The Tubes and later The Grateful Dead) on keyboards, Rick Anderson (The Tubes) on bass and drummer Bob Macintosh. As a collective, Beans hoisted their freak flag high and were quickly declared the biggest band in Phoenix by the end of 1969. And what do you do when you can’t get any bigger? You head (back) out west.

These three politically charged psych pop songs were recorded between 1969 and 1972 in various studios between Phoenix and their new adopted digs in San Francisco. Limited to 500 copies and housed in a unique die-cut jacket, Spill The Beans also includes a deep dive into the history of Bill Spooner’s early career, before Beans morphed into The Tubes, by Arizona music historian John P. Dixon.   words / d norsen

5 thoughts on “The Beans :: Spill The Beans”