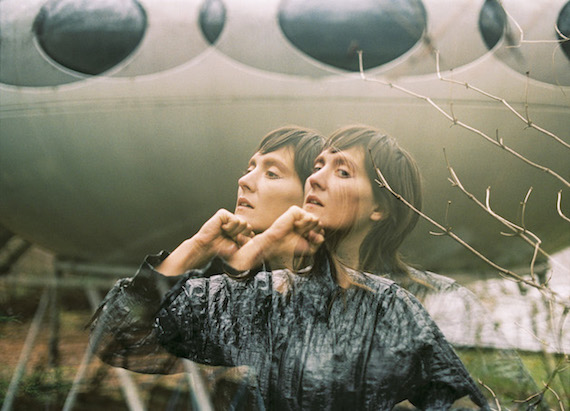 Rock Pool  is an extension of the madcap musical world of Le Bon’s last record,  Crab Day. She calls these songs the “killed darlings” of that studio session, in which she conjured the ritual tunes for an absurdist holiday of the mind, her “crab day.” The sound is playful: wild fun in constant danger of unraveling, or perhaps some FLUXUS game for rock band. However, the playfulness is contained in deftly composed songwriting, bursting with formal surprises and rhythmic turnarounds. Songs unfold with the elegance of a medieval court dance, the repetition of compositional minimalism, and the jerky boogie of a new wave band. Firm beats pulse under interlocking, angular guitars that split and skitter against mallet and bell sounds. Plucky, percussive timbres interlock with pleasing geometry. Her vocal melodies often leap and bound, while her delivery maintains a beguiling, glassy control. Against the frenetic spectacle of the music, her cool, composed singing disarms, allowing her keen language to seep in.

The vibe of  Crab Day  is topsy turvy, contradictory. Le Bon sings about how love is not love and how she was born on the wrong day. Tracks like “Find Me” and “I’m a Dirty Attic” are framed with these labyrinthine lyrics that conjure a surreal, heightened space…   like some endless Kafka castle. The album ends with a drawn out musical crescendo that never resolves, vanishing like a staircase that walks forever up into the clouds.  Rock Pool’s  “killed darlings” begins to breach those cloudy barriers. Rock pools are natural habitats for crabs, but they fill and drain–liminal spaces that are at times dry, and at other times submerged. The title track’s descending/ascending chorus and the single note splatter solo in “Perfume Days” firmly locate us in the key of Crab, but she opens the EP by singing that she doesn’t mind cleaning out her totemic mug museum. Nonsense congeals into reality. The final track shatters the absurdist spell to deliver an heartwarming, plaintive love song in which Le Bon sighs “I just wanna be good to you” over rolling pianos and piping organs. We emerge from the house of mirrors with at least one clear purpose: to try to be good.   She is currently on tour with Tim Presley, and the collaborative energy of their past project, Drinks, carries into the live show, with Cate and her band helping to bring Presley’s  The Wink  to life. words / a spoto