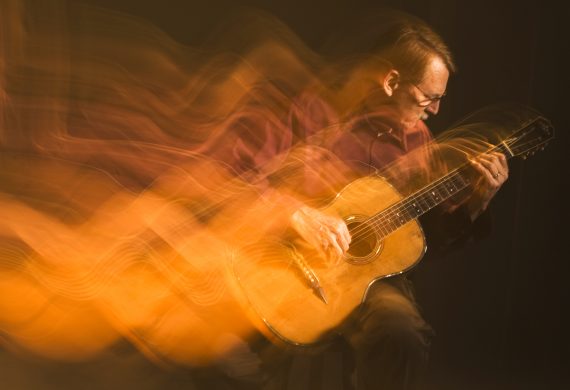 “He’s a student of mine and he’s better technically than me or Fahey.”

Those are the words of guitarist Robbie Basho, speaking of his then protege Richard Osborn, who studied with Basho in the late ’60s and early ’70s. But like so many proponents of the American Primitive guitar style, Osborn is nothing if not patient. Sidelined by an injury, it’s taken a handful of decades for his playing to emerge. But it’s here now: in 2010, he was featured on Tompkins Square’s Beyond Berkeley Guitar collection alongside Chuck Johnson, Ava Mendoza, and more. In 2012, he self-released his debut recording, Giving Voice: Guitar Explorations and followed it with Freehand in 2015.

His latest is Endless, a blissful LP of “free raga” explorations, again on the venerable Tompkins Square label. A collection of gently unfurling melodies played on six and 12-string guitars, the album registers as deeply spiritual, like the work of his one-time mentor Basho. Whether exploring comforting soundscapes (“Streets of Laredo, A Pastorale,” “Brenon Fisherman’s Prayer”) or more mystical, tentative drones (“In a Monastery Garden,” “Your Eyes”), the technical ability Basho referenced is display, but it’s the feeling of Osborn’s playing the draws the listener deeper and deeper in. words / j woodbury

Richard Osborn :: In A Monastery Garden