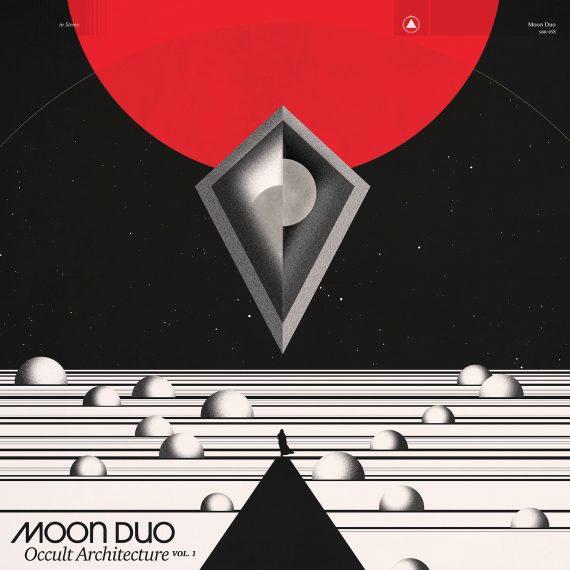 Guitarist Ripley Johnson and keyboardist Sanae Yamada record together as Moon Duo. Since debuting in 2009, the two have assembled a discography of dizzying melodies, spiraling, fuzz-drenched guitar explorations, and hypnotic rhythms, sounding something like a hybrid of Suicide and Neu! The band’s new album, Occult Architecture Vol. 1, arrives February 3rd via Sacred Bones. Inspired by hermetic literature and the writing of Mary Anne Atwood, Aleister Crowley, Nathaniel Hawthorne, and others, it’s the first half of a two-part sequence, embodying the concept of “darkness,” while its companion will explore brighter tonalities.

AD recently spoke with Yamada and Ripley, seeking some explanation of the band’s concept and attraction to magick. Below, our conversation, edited and condensed for clarity.

Aquarium Drunkard: I really like Occult Architecture Vol. 1. What led you to divide this record into two halves? It might be a little reductionist to say one half represents a dark side and one a light side, but was that sort of the idea?

Ripley Johnson: Yeah. We had a lot of material, so it just sort of made sense to organize it that way. When we were making the record, the seasons were changing. We started in the winter and then we went into the summer. It was just sort of a natural way to organize the material. We didn’t want to do a double album, so it’s two separate albums, but they’re linked together. We wanted to create separation, because a double album is just a whole different beast. We didn’t want the record to be this giant release that people had to really commit to digesting. We wanted each half to stand on its own.

AD: As a band, you’re not afraid of asking for a little commitment in terms of your material. Why did didn’t you want to ask somebody to sit down to a double album?

Ripley Johnson: Part of it is that I think the double album has to be organized in a specific way so that it makes sense. We think about our records as records, as in vinyl. We think about side one and side two. I have a hard time with [buying] a new record and it’s clearly sequenced for CD or for digital and then dumped to vinyl and it doesn’t make any sense. It’s two or three records which don’t flow. But the classic double albums that are a lot of material to digest, they make sense in a certain way. Exile on Main St., Royal Trux’s Twin Infinitives, Physical Graffiti…they make sense and this was not gonna work that way.

Sanae Yamada: When we were developing the material and recording we kinda just realized we had these two different bodies of work, that we were making two records, but they were also part of the same larger pairing. Like twins or something. 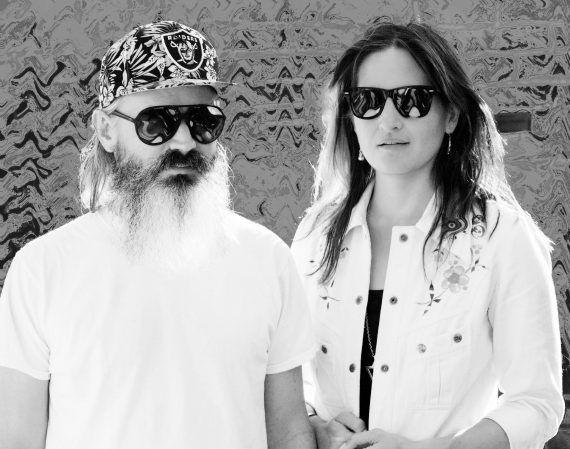 AD: At what point in the creative process did that idea occur to you guys?

Sanae Yamada: It was reasonably early on when…it just sort of became clear that we had a bunch of songs that kind of hung together in a heavier way. Then there were other songs that definitely felt like outliers to that. They had a different energy to them.

Ripley Johnson: The dark/light thing became apparent right away. That was conscious, and we wanted to do a darker record. When you do that, and you go through that process, it feels unbalanced in some way. Maybe if you’re a goth band or something that’s just your natural sort of mode, but we wanted to do something to balance it out. Almost to relieve ourselves in some way.

AD: There’s a conscious darkness to it to Volume 1, but it’s also super fun. “Creepin’” is a really a blast of a song. Do you guys sort of find that that’s a part of the appeal of darker aesthetics as well, that there’s sort of a thrilling, irreverent element to them?

Ripley Johnson: We’ve been in Portland for about four years now but we lived in San Francisco for a long time before that. There’s no seasons there. There’s August, which is winter, and the rest is the same. So we really liked the seasons up here. We liked the winter — it’s dark, but it’s nice. We enjoy it. So there is a pleasure in the darkness. It’s not like, like Sanae said, a morbid thing. It’s another experience to explore. We’re not trying to sound “grim.”

AD: How does the occult play into these songs? There are references throughout — “Cult of Moloch,” “Will of the Devil” — but I get the sense the attraction is deeper than that.

Ripley Johnson: Yeah, it’s not like Satanism or anything like that. [That element] came about from just reading about different occult things, and just being sort of in that zone while we were working on the record. But yeah it’s more like a Nathaniel Hawthorne Young Goodman Brown vibe. The old religions, the idea of things that you can’t explain. It came from reading about that kind of stuff and being interested in that aspect of the time where people were trying to understand nature and they couldn’t, so they would just sort of make up things to sort of try to clarify what was going on in the world.

Sanae Yamada: I think a lot of the occult philosophy and hermetic philosophy and science [is driven by] trying to understand to reality from a very holistic point of view. Examining things in nature, examining patterns. In hermetic medicine…there was this whole idea of the unseen body that surrounds the physical body. In all of this are these central contrasts, opposites needing each other in order to exist. That kind of played into our playing with the idea of the dark album and the light album. These two entities balance each other, but that are also different from each other and they have a connection to natural cycles.

AD: I read a really cool book called Season of the Witch: How the Occult Saved Rock And Roll by Peter Bebergal. He writes about how rock and roll adopted the language of the occult as a kind of religious language for creative expression, and that it centers around the unknown and mysterious.

Ripley Johnson: Yeah, yeah absolutely. There’s things that have power in nature that cannot be explained. I mean people study music, and how a hit song is written, why things get stuck in your head, and all these other things. But there’s a power to music that you can’t really explain. There’s a mystery to it, something that connects people. I guess that’s what we were getting at in a way, the idea that occult architecture is the structuring of this sound [and this] power. That’s what music is: it’s structured sounds in order to influence people or move them in a certain way. In a way that seems almost magical. You can hear a song, especially when you hear a song that moves you in a way that’s unusual. It’s something novel that you hear, and it just hits you in a certain way. It’s just really hard to put your finger on why. It’s almost like magic.

Ripley Johnson: We pick an artist we admire and give him as much latitude as possible.

Sanae Yamada: It’s exactly what we were hoping for. words / j woodbury

One thought on “Moon Duo :: The Aquarium Drunkard Interview”