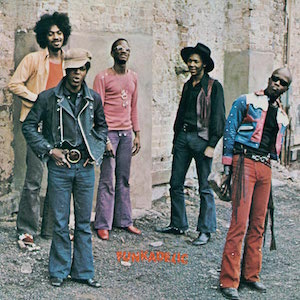 The only official, full recording of an early Funkadelic concert was first released on CD in 1996 — thankfully Tidal Waves Music have (finally) issued the set on vinyl. The recording itself seems to deeply divide P-Funk fans, as it showcases a group in transition with new members that had no rehearsal time (and in some ways suffers for it). However, it’s a beautifully recorded document of Funkadelic on stage in a Detroit suburb, captured shortly after the release of their epochal ’71 masterpiece Maggot Brain. The sound of the vinyl is superb, and has much more range than the flat-sounding CD. For those reasons alone, it’s essential.

As George Clinton has always presented P-Funk concerts as a Parliafunkadelicment revue, this set starts off with 20 minutes of instrumental intensity from ‘Funkadelic’ before George and the ‘Parliament’ vocalists step up to their microphones. Kicking off with a blazing instrumental version of “Alice In My Fantasies” (itself not released by the group until 1974 in a vocal take), Eddie Hazel’s epic guitar solo “Maggot Brain” follows, and the onstage troubles begin. Drummer Tiki Fullwood and rhythm guitarist Tawl Ross had quit the band days before this concert. The rhythm guitar is handled rather flawlessly by Harold Beane (a Stax session cat whose awesome performance here shows that he was undoubtedly familiar with the records, and probably a fan himself), but Tyrone Lampkin behind the drum kit wasn’t able to set aside his flashy overplaying to settle into the deep pocket that Tiki laid down (a crucial element of the Funkadelic foundation).

As for “Maggot Brain”, even Tyrone’s showboating cannot diminish Eddie Hazel’s masterful playing. Of course the studio version is definitive (which is mostly just the two guitars, as Clinton mixed out the band tracks, as he has explained they played too poorly), but this full band version, flaws and all, is essential listening as well. According to the liner notes, original Funkadelic bassist Billy ‘Bass’ Nelson, was barking commands at Tyrone in an attempt to get him into the pocket throughout the show.

As the singers take the stage, they launch into the lugubrious scatology that is “I Call My Baby Pussycat”, a track that was originally issued on the (first) Parliament LP, Osmium, from 1970 (and recut by Funkadelic in ’72 as, simply, ‘Pussy’). Chaos soon rears its head when the group attempt to transition into the funk anthem “Good Old Music”, as the drums enter at double time, throwing everyone off. Thankfully, George Clinton held tight to his vocal at the correct speed and the group (more or less) falls into place. And while this recording lacks the sock-you-in-the-gut deep funk of other versions (this song was released in versions by The Magictones, The Parliaments, and Funkadelic), there’s something about the speedy chaos here that I really dig. Sadly, due to vinyl time restraints, the transition into “I Got A Thing” is a stark cutoff between sides that interrupts the flow a bit.

By this point in the set the band falls nicely into a very spaced out jam that slows the tempo far below the manic studio version of “I Got A Thing”, and the group finally gets a breather before launching in to the acid-gospel showstopper “All Your Goodies Are Gone”, which showcases the awe-inspiring talents of the Parliament singers (specifically Calvin Simon’s ‘testifying’, which Eddie Hazel mimics on guitar). The original single version by The Parliaments is fast and edgy, this wisely slowed down version is, in this fanatics opinion, THE definitive version.

Side 4 begins with George Clinton declaring he’s ‘higher than a motherfucker’, and as the band launches in to “I’ll Bet You” (their debut single), the sound of George’s state is brilliantly achieved; by the time Eddie Hazel takes a stellar solo, the band is peaking. Special props must be given to the recently departed Bernie Worrell; his work on keys here is almost always full of unexpected turns, is constantly inspired and a testament to his genius. The musicians and vocalists all travel to the deepest of spaceways for the rest of the set, as they hit upon the trip social commentary of “You And Your Folks, Me And My Folks”, into the acid-fried insanity of “Free Your Mind And Your Ass Will Follow’” Oozing with fuzzed out freakiness, it’s a downright frightening end to a much appreciated document. words / d see