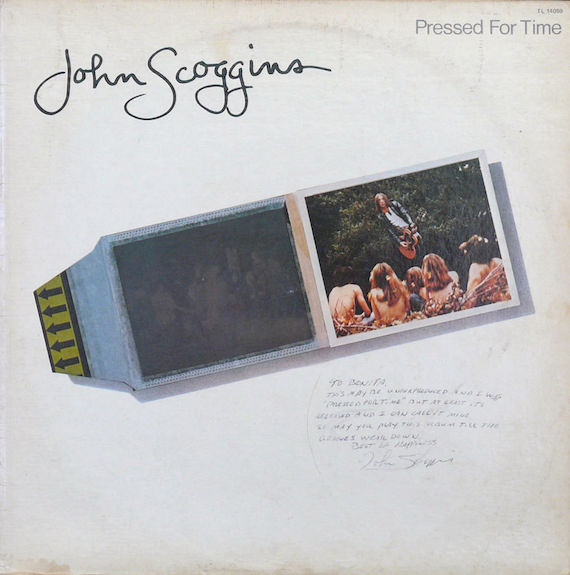 The existence of the ‘tax scam’ LP is one of the stranger tales of the 1970s record business. In short, crooked label heads would press up demos of unsigned artists, outtakes from known artists, and other various ephemera in limited quantities that were thrown out into the market with zero promotion — all based on the hopes of commercial failure and the ability for the ‘label’ to write off the failure as a loss.

John Scoggins’ Pressed For Time is one such record, and one that has become legendary in power-pop collector’s circles. Originals are nearly possible to find, and sell for several hundred bucks when they do.

As it turns out Pressed For Time wasn’t a ‘solo’ album by any means, but the product of a New York band called Ramparts, led by Mr. Scoggins. Ramparts were a ubiquitous opening band in mid seventies Manhattan, and Scoggins himself worked as a roadie when he wasn’t gigging. In one of the more bizarre tales of A&R, the band was signed over the phone by a representative from Roulette Records new off-shoot, Tiger Lily Records (a quick search on organized crime and Roulette will take a reader on an insightful, intriguing ride through the criminal element of the music biz). Miraculously, even though the LP had zero promotion, Bomp Magazine’s Greg Shaw did, in fact, get ahold of a copy and wrote a very positive review, stating the lp was well worth the trouble to seek out.

“Treat Me Right” is the absolute highlight of the album — it’s the type of song that has hit potential just oozing and dripping from the grooves. It’s the type of song that, upon first listen, made me lift up my head and marvel in its rock n roll perfection. Over a moody minor chord progression, the exceptional melody is driven by punchy drums and potent guitar work. And while the lead guitar is far from graceful – and downright excessive in moments – it does add a unique edge to the music setting it apart from the rest of the power-pop pack.

Other than a bizarre, unfortunate jokey country track, each song on this album is the type of thing that will appeal to those who dig artists in the Big Star/ Emmitt Rhodes/ David Werner vein. Courtesy of Rhino Records, this will be a highlight vinyl release to look forward to on RSD. words / d see