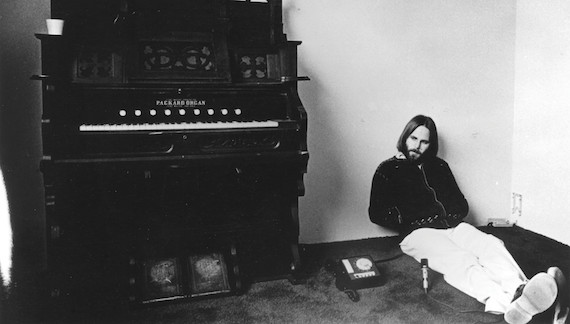 Our enthusiasm for 70s era Beach Boys and the creative stretch of brothers Carl and Dennis Wilson runs deep, notably during the course of albums Surf’s Up, “So Tough”, and Holland. And recently it’s the latter, Holland, a still somewhat overlooked gem from 1973 that is resonating most. Spend enough time with the record and you’ll find spectacular revelations beneath its miraculous scope; a sonic goldmine that reveals itself in greater and more profound depth with each seemingly infinite visit.

With Brian Wilson taking something of a backseat, younger brothers Carl and Dennis, along with manager and co-lyricist Jack Rieley, found themselves in a sandbox all their own. And in contrast to the waters of surf-pop innocence a decade past, here we peer through an aquatic lens matured and layered, revealing something altogether foggier and oblique.

Beginning with the album’s art, a close look at the cover reveals itself as a reflection of the lp’s thematic and sonic centerpiece. A washy upside-down image of the Kromme Waal (a canal that runs through Amsterdam’s city center) seems to reflect a transcendent and spiritual journey to the center of something deeper. Shrouded in hazy waters, Dennis Wilson’s and Jack Rieley’s “Steamboat” feels like something of a prologue to Carl Wilson and Rieley’s episodic “The Trader”. As a piece, the song’s eerie fade-in and moody off-kilter rhythm conjure a haunted past of wicked deeds exacted by greedy men — rich, pioneering explorers entering the promise of a paradise in an exchange for a guarantee of their own: to be true and right and good to the earth they were expanding upon. The exchange, an eternity of deception. “The river’s a bed of sweet berries and flowers / Banks of thirsty lies / (Please be careful)”. The perpetual premeditated betrayal of company men and glad-hands alike viewed with a resigned, ironic dismay: “Steamboat of living ever faithfully ride” … the ship-hands’ faithful assurance: “Don’t worry Mr. Fulton / We’ll get your steamboat rollin’.” An ominous yet poetic fog brushes across the landscape, masking the rivers in a waywardly scenic and psychic mystique. “The river’s a dream in a waltz time / Banks of jasper glaze / (Have a ball and sing).” The gloomy clouds ahead concealed by a soulful barbershop beat — in the kind of offbeat sense that blooms in Wild Honey — and an electrifying slide guitar solo, fading in the mist.

“The Trader” opens with the greeting of what sounds like a small child (innocence), before the song envelopes the listener in an immediate swell of sonic bliss. Here, a buoyant piano and grooving bass line move along a psychedelic pop stream across Wilson’s impassioned vocals and the Beach Bros’ harmonic blessing. Whereas the surface the song tells an unfortunate tale of colonization, Wilson hints at a more profound truth, one that requires an expansion of thought and sight beyond the material riches — beyond the jewels and the velvet of imperial spoils, speaking rather to the pure, untarnished connection between man and nature. The song’s titular character sees this at first, writing back to the crown about his discovery, the verse’s jaunty energy reflecting his giddy awe: “There’s a place / Where totally folks are free (Happily completely) / Nourishment fills the prairies and the hillsides / And animals stalk the mountains and the seaside…” And though he betrays this discovery, sending the natives to scatter, building shops and roads in their wake, Wilson leads us to their place of retreat, revealing a harmony that cannot be disturbed:

“Making it softly / Like the evening sea, trying to be / Making it go / Creating it gently / Like a morning breeze, a life of ease / Eyes that see / Beyond tomorrow, through to the time without hours / Passing the Eden of Flowers / Reason to live.”

This bridge finds the song slowing into a calmer, softer tone. Cascading piano and vibes, along with Wilson’s silky, earthen falsetto, take the listener to a reprieve far away from the sprightly, overwhelmed excitement of the traitor’s discovery and subsequent citification of the people’s old land. Here, the journey is the destination, and it’s one that savors the simpler, more natural jewels. Wilson sings of “Embracing together / Like the merging streams, crying dreams / Making it full.” Merging streams running through the center: the center of a larger purpose. Let the prairies and the hillside be enough, allow the profound poetry of animals roaming the mountains and the seaside, let the people enjoy this, together. The unity of these elements is what truly stands the test of time. And though the trader displaces this scenic, bucolic reality, it nonetheless prevails. The harmonic blessing of the humbled life. Reason to live, indeed.

Further Listening: Carl Wilson would show earlier signs of a creative transcendence with one of his first major solo contributions to The Beach Boys — the progressive pop masterpiece “Feel Flows,” from 1970’s Surf’s Up. Written and recorded almost entirely by himself, the piece finds Wilson channeling his vocals through a reverse echo, like a stream merging backwards, and manning everything from lead, backing and harmony vocals to piano, organ, Moog synthesizer, guitar, and percussion. The doubled-over saxophone and flute contributions from Charles Lloyd only elevate the song’s already transcendent sonic heights, with chiming piano chords, warped production and arcane lyrics hinting at a cosmic divinity. An openly spiritual person, Wilson sings of “Unfolding enveloping missiles of soul / Recall senses sadly / Mirage like soft blue like lanterns below / To light the way gladly,” and while it may leave listeners’ curiosity dangling, one thing is for sure: Wilson is singing with a warmth and love as profound as “God Only Knows,” flying high above us, poetry in motion. One takes comfort in the thought that he continues to do so, wherever he may be. words / c depasquale

9 thoughts on “The Beach Boys: The River’s A Dream In A Waltz Time”