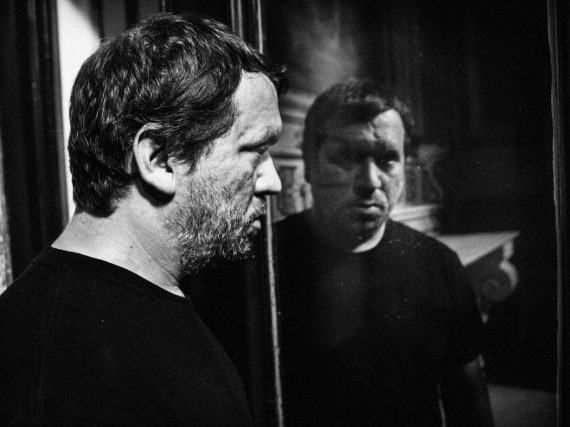 Rob Mazurek is building a life’s work. Coming up in the Chicago free music scene, the cornet player and composer has made pioneering music alongside his peers, including Tortoise, Jim O’Rourke, Stereolab, and Jeff Parker, and collaborated with jazz heroes Bill Dixon, Pharoah Sanders, Yusef Lateef, and more.

But one of his longest running collaborations is with drummer Chad Taylor, with whom Mazurek leads various “Underground” groups. Their latest, A Night Walking Through Mirrors, finds them teaming with London  musicians Alexander Hawkins and John Edwards. It’s both brash and thoughtful, a live exhibition of the telepathic interplay between Mazurek, Taylor, and their guests. AD caught up with Mazurek to discuss the record, and how a unifying thread, loosely inspired by science fiction and cyberpunk literature, has begun to solidify in his work, uniting it thematically and conceptually.

Aquarium Drunkard: I’d like to start off about asking you about your notion of protest music. In the biography that accompanied A Night Walking Through Mirrors you say that the various Underground albums have always been “protest” music. How, and what, does your music protest in this context?

Rob Mazurek: I mean, it’s basically just a protest against anything or anybody that wants to put up some kind of barrier between total creativity, ya know? So whether it’s music or psychologically or spiritually, that’s been the thing [we’re protesting]. The first Chicago Underground record is called  12 Degrees of Freedom. It has those same precepts, not just in music but dealing with psychology, spirituality, the whole thing. That’s always been the underlying theme with that. Whether we’re talking about Exploding Star Orchestra or Chicago Underground, it’s all about expressing freedom.

AD: I think that right now it’s so tempting to read the word “protest” in any context and immediately think of geopolitical or sociopolitical matters. But it’s interesting to me that while your definition of protest music doesn’t preclude including those sorts of things, but isn’t not limited to that either.

Rob Mazurek: Yeah, it’s definitely not limited to that.

AD:  In addition to your long time recording partner  Chad Taylor on this, you worked with two British musicians: Alexander Hawkins and John Edwards.  Did you as a group discuss that idea of protest or…

Rob Mazurek: No, not at all. I mean, no. [But] I think it’s inherent in everybody’s sensibility. The whole Brexit thing [was happening, everyone was]  dealing with everything. But obviously we’re all like-minded with wanting to express ourselves and not just ourselves but a spiritual and universal picture. We didn’t say any words at all before we started playing. We were all to some extent familiar with each other’s playing, but this was the first time we’ve played together. But as far as the idea of protest, our goal was to express something more universal. You can hear it. At least I can.

Rob Mazurek:  It’s  hard to talk about your own music but it’s an astonishing recording. I mean, from beginning to end there’s no edits; it’s just how we played it, and it sounds so cohesive and interesting, powerful. It’s a really special thing that happened.

AD: You’ve been playing with Taylor for a long time. This record coincides with something like  twenty years of playing together, right?

AD: You referred to the record as astonishing. After playing with somebody so long, it must be a thrill to hear something unexpected in your music. How do  you keep a creative partnership, like the one you’ve had with Chad for twenty-five years, thriving and evolving? What are some of the key ingredients to doing that?

Rob Mazurek:  We’re always approaching stuff in a new manner. We don’t like to repeat ourselves. Although there are elements in music which obviously do repeat   — you know because you build up a vocabulary — but we’re still consistently expanding that vocabulary. We’re totally not interested in just figuring out a formula and doing that over and over again. Which a lot of people seem to like to do and are successful at it. It’s a mentality for us, at least for me, because I can’t speak directly for Chad, but we’ve been working together for so long even without putting other personalities into the mix, it’s always interesting. We always bring something unique to the table whenever we play or record. I couldn’t imagine just playing stuff over and over again the same way.

AD: This set you guys include some elements of the standard “It Might As Well Be Spring” on this record. How does a melody like that present itself to you while playing?

Rob Mazurek: Well, you know, people say certain things and certain things come to the head. We were playing in E-flat. Sometimes when you just play a note, a slight chord or something, it brings something to mind. It can feel natural to slip into that. None of that stuff was talked about at all. It could’ve been anything, but it was that, and for me it’s one of the highlights of the record. It slipped in there; even for me listening back to it, it’s still a nice surprise.

AD:   I guess that comes back to that basis of your approach, which is allowing for anything to happen as long as it works, you know?

Rob Mazurek: Or even if it doesn’t, man. One of Chad’s famous quotes is that you can’t be afraid to fail.  Fortunately, I don’t think we do fail so much, but it’s more about taking chances and just letting it go where it goes. Most of the  musicians that I love  do that anyway. The Art Ensemble of Chicago are masters of that. They’re my favorite band of all time and probably because of that very reason. They can do that anywhere, and whatever they do just  felt so natural and right. It’s not overly worked out, it’s not overly composed.

Rob Mazurek:  I’m a huge proponent of beginner’s mind as well; approaching everything as if it were the first time. I probably played “It Might As Well Be Spring” a couple hundred times since I’ve been alive. In the ’90s and the ’80s I played all the standards. Three sets a night, three or four nights a week. It was hardcore. Naturally something like that can slip in for me now and then, and it’s a surprise. But you have to try new things. Life  would be so boring if you didn’t, at least for me.

AD: Last  year, you released a beautiful album called  Alien Flower Sutra  with Emmett Kelly.  Could you  tell me a little bit about the concept of that record as it relates to bioscience and machinery?  I thought a lot about cyberpunk literature in relation to the record.

Rob Mazurek: Well, me too. I read a lot of William  Gibson and Samuel R. Delany.   For years, my work has [explored this] cosmic unity theme.  Exploding Star Orchestra, some of Chicago Underground, and the various other groups I’ve led, [they all] have kind of a science fiction aspect.

AD:  There’s a futurism streak running through them.

Rob Mazurek: Asking, you know, what is possible in the future? Of course, there’s a lot of exploration of dystopian things. A  lot of the words [used]  for the Exploding Star records are more on the dystopian side, but that collides with the music that if you listen closely is, at least to my ears, expressing the idea of turning that darkness to lightness. Dystopian futures can give way to utopian futures.

I’ve had this grand idea of creating this opera type situation with all these subjects for years. Some of the songs that I did with Emmett for the  Alien Flower Sutra  directly related to the music I do with Exploding Star Orchestra, which relates to the music I also do with Chicago Underground, and the music  with  various new things I’m working on.   But I wanted to take apart the idea in all of these stories of things having to do with androids being able to rebuild themselves after “the apocalypse,” after the  world decides to stop working. I wrote all of the melodies and all of the music, and I asked Emmett to think about these concepts while he was making the lyrics.

AD:  He tapped into some of the ideas swirling around in your work.

Rob Mazurek: That’s how the collaboration started, I sent him all the melodies and all the ideas, that idea of these androids bioengineered beings which could build themselves and sustain life without permanent ecosystems. He just went with it, with the melodies beautifully. I think it’s maybe another example of something that’s surprised me after it came out.

AD: That sense of surprise drives you?

AD: What are you working on now?

AD: Does it feel connected to the same sort of operatic science fiction side of things?

Rob Mazurek: Yeah, totally. I use that word — “operatic” — openly, it’s as subtle as it is large. In the end I want to perform all of this stuff together as one long twelve-hour situation. All of things are just kind of pieces of the puzzle I’m envisioning, a kind of grand happening.

AD:  I like thinking about how that fits into that overall construct in your work, or what doesn’t. I  really enjoyed your song cycle,  Alternate Moon Cycles,,  and I love questioning whether or not that fits into the overall story.

Rob Mazurek:  The main quote of that record is, “The moon’s beauty is in variations of sameness,” which is a Samuel R. Delany quote. It does fit in, exactly.  words/j woodbury