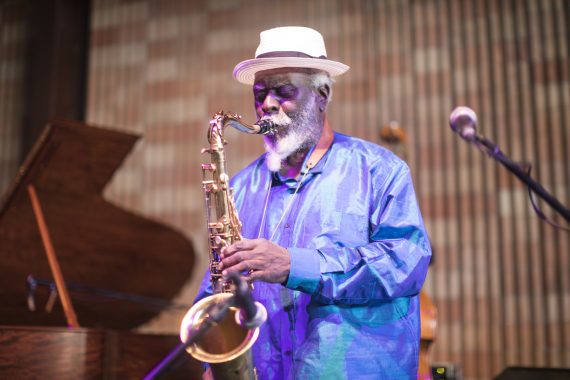 “You have to really want to be here,” Keith Abrahamsson says, overlooking the small West Texas town of Marfa.

We’re sitting on the deck of a stone and adobe  house just off Highway 90, positioned atop a hill. Since 2014, the label Abrahamsson founded, Mexican Summer, has hosted the annual Marfa Myths festival here with arts nonprofit Ballroom Marfa. Initially a single performance at local venue El Cosmico, the gathering has bloomed into a four-day multidisciplinary happening, dedicated to blurring the lines between cinema, literature, art, and music.

Below us, a rooster crows and a couple dogs fitfully bark. Abrahamsson, wearing a denim jacket and faded Levis, leans back in his chair and considers my question: What keeps him coming back to Marfa?

“It’s kind of hard to articulate,” Abrahamsson says. “But it does feel like the town has this magical something. I don’t know if it’s the remote location, or the super-dramatic landscape and sky. There’s something about it that just has this seemingly magnetic pull. I don’t know how to articulate what about it gives you the feeling that it’s a special place, but it does have that quality.”

Marfa’s specialness is a reminder that there’s no such thing as “nowhere.” Despite its relative geographic remoteness – it’s located about six hours west of Austin and a three-hour drive from El Paso – Marfa feels alive in an indefinable way, pulsing with a vibrancy most small, mostly isolated communities in America can’t anymore, their industries and prospects dried up. Though regular injections of New Yorkers, Angelinos, and big city entrepreneurs – via festivals like Marfa Myths, the Marfa Film Festival, and the Chinati Weekend – bring clout and cash to the town, it’s not a hectic place. Which is precisely why everything feels so charming: Things happen here, at their own gentle pace. 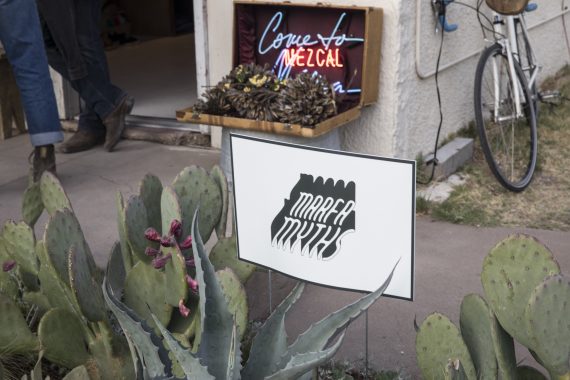 That sense of slowness – a luxury afforded by the town’s everyday inhabitants – is crucial to the festival’s feel. Marfa has beckoned artists since the 1970s, when conceptual artist Donald Judd moved to the town looking to duck out of the crowded New York arts scene and score massive swaths of cheap land. Judd’s legacy – preserved by the Chinati Foundation and the Judd Foundation – permeates the town, which is home to a number of curiosities, both satirical (Elmgreen & Dragset’s “Prada Marfa”) and potentially supernatural (the phantom Marfa Ghost Lights, which can be viewed on east of town on Route 67).

It’s not all magic. Marfa is a real place full of real people, not an imagined concept. Just outside of town floats a massive blimp, hovering above the desert landscape scanning for drug traffickers, a telling reminder of the town’s proximity to Juarez, and to the border trouble that occupies space in the minds of many Americans. Across from Marfa Myths headquarters, where festival goers can peruse vinyl and pick up Topo Chicos, I watch the cops bust someone at the local gas station, circling his truck and handcuffing him. Most of the residents are game to indulge the art world types, but sometimes hesitantly. Sitting at the bar at Hotel Paisano, where James Dean and Elizabeth Taylor stayed while filming Giant, I listen as two local kids sipping beers crack wise at the haughty nature of one festival attendees’ demands of the overworked bartender. At Bad Hombres, a local eatery, the menu states non-locals will pay a higher fee for breakfast tacos heaped with eggs and bacon than full-time residents (they are worth it, and honestly, I’m not even sure I was charged extra). At differing points, I heard a shout from a motorist to “slow the fuck down,” and a command from another to speed up. 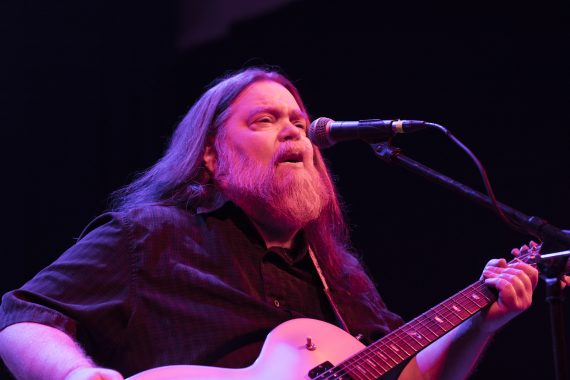 But more often than not, it’s impossible to deny Abrahamsson’s assertion that there’s something magnetic at play in Marfa. Like on Thursday evening, when Texas psychedelic pioneer Roky Erickson and his band tore into “You’re Gonna Miss Me” at the Marfa Visitor’s Center. Though their rendition lacked the rage and energy his band the 13th Floor Elevators brought to their original 1966 recording, knowing even a little of Erickson’s history, replete with heroic doses of acid and electro-shock therapy shamefully administered in Houston and Rusk, made the moment feel courageous and remarkable. The following morning, in a gallery lined with original posters from the 13th Floor Elevator’s early days, historians Paul Drummond and Johan Kugelberg explored the impact and influence of Erickson and his original band mates on American psychedelia. Serving as an aperitif for their forthcoming book about the group’s history for Mexican Summer’s publishing wing Anthology Editions, the talk was as electrifying as the performance itself, illuminating the American singularity of the band’s story.

In addition to its retreat-like aspects (Abrahamsson calls the festival “a chance to temporarily escape the urban doldrums and our inverted reality” in his introduction to the festival’s official zine), the freeform nature of Myths is its primary appeal. There’s little stylistically connecting Los Angeles jangle rockers the Allah-Las to the Norwegian dance poetry of Jenny Hval, or uniting the spiritual jazz/Afropop of Idris Ackamoor and his Pyramids to the soft pomp of Connan Mockasin’s set with the Jazz Busters, but the variety doesn’t feel forced or awkward. It’s intrinsic to the experience, woven into it.

As is the ideal of collaboration. Each year, Mexican Summer invites artists to take up residencies during the festival, and pairings have resulted in collaborative records by Mockasin and Devonté Hynes of Blood Orange and Ariel Pink and Weyes Blood. This year, Gustav Ejstes and Reine Fiske of Swedish progressive rock band Dungen worked with Jeremy Earl and Jarvis Taveniere of Woods, previewing their upcoming recording with a flute and electric piano bolstered jam on Saturday night at The Capri.

Atlanta-based artist Lonnie Holley, upon completing a set of emotionally dense, fiery avant garde cosmic blues in which he stated an intention to “tear down the wall” and “build steps to the moon,” invited Tonstartssbandht, a krautrock-leaning New York/Florida duo to the stage to attempt to find their way into his spontaneous tapestries. While Holley and the band sounded better separately, the creative gambit was laudable. Only an attempt can yield results. And the pairings weren’t limited to musical combinations. While electronic composer Kaitlyn Aurelia Smith performed her overwhelming set, video art by Rose Kallal was projected behind her, dovetailing with her multilayered, processed words and vocal abstractions. 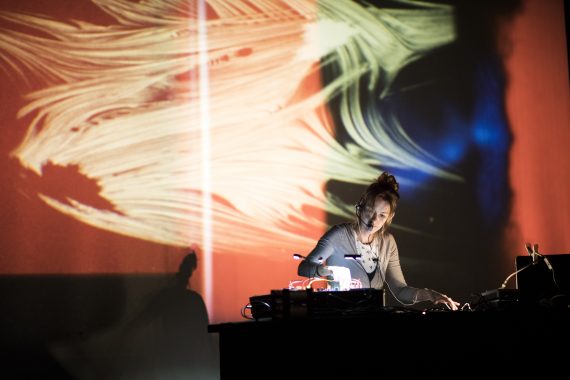 In this way, the festival and the town where it’s hosted have blended. Natalie Mering, who records under the name Weyes Blood, has attended the festival since its inception, says that over time, the Myths has developed a deeper relationship with its home.

“…I’ve been here enough times to kind of see the cross between the two worlds – the New York art world vs. people from Texas and Marfa,” Mering says. “I think in the beginning, it seemed like this really gentrified zone, and it didn’t really make a lot of sense, but I think over time, the two cultures seem to be amalgamating really well…”

For Myles, who splits her time between Marfa and New York, the town is a perfect place to write. “It’s sort of weird, but it feels really familiar in some strange way,” the author says, sipping coffee from the Saint George Hotel on the patio of the small stucco home she owns here. The town doesn’t feel culturally isolated to Myles. Due to its art world cred and the presence of the Lannan Foundation, there’s plenty of readings and performances. “It kind of clusters socially and disperses,” she says.

But those clusterings tend to be remarkable. As was the case on Saturday afternoon, when legendary jazz saxophonist and bandleader Pharoah Sanders took the stage at the Saint George Hall. Sanders eased  into his set, but it wasn’t long before his unmistakable wail had the entire room enraptured. Looking out, Ackamoor could be seen closing his eyes and swaying; Kugelberg seemed to have left his body; Sanders’ occasional collaborator and Marfa resident Rob Mazurek stood at attention in the crowd; a tiny child offered up some blend of interpretive dance and ecstatic lunacy. Myles, capturing a quick snap for her Instagram account, summed up the mood perfectly, as only a poet could: “weepy & I want to live forever”

It’s a treasured thing to be a guest someplace. It’s a way of getting out of your own life, of immersing yourself in the company of strangers and counting on their kindness. Aligning your story, however momentarily, with theirs. Crammed, harried, and stressful, music festivals so rarely foster this kind of connection. But a different spirit drives Marfa Myths. Whether it comes in the form of a transcendent musical experiences – the sound of Pharoah’s horn, Smith’s spiritually edifying vistas, Roky Erickson barking about a two-headed dog – or in quieter moments, like my chat with a resident at Marfa Burrito, who leaned in quietly and suggested the pollo asado with added frijoles, the feeling can be transformative.

Over the next four weeks, Aquarium Drunkard proudly presents a series of podcast episodes featuring interviews recorded live at Marfa Myths, presented with support by Mexican Summer. Subscribe now via the RSS feed or iTunes. We’d like to thank Jess Rotter, the staff at the Riatta Inn, Freda, the Allah-Las, Lonnie Holley, Weyes Blood, Eileen Myles, and everyone at Mexican Summer and Anthology.

One thought on “There Is No Such Thing As Nowhere :: Marfa Myths 2017”