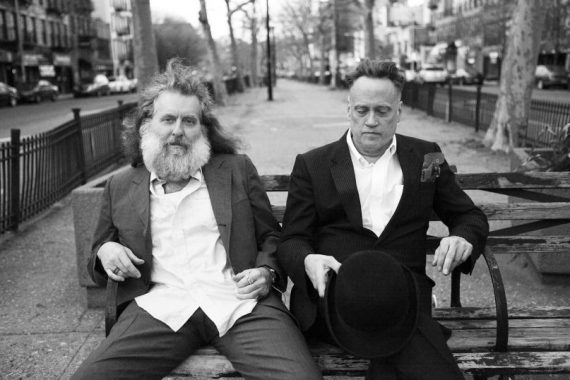 There are a solid three ways you could have come to be a fan of Miracle Legion: directly through the band’s output in the mid-80s through mid-90s; through singer Mark Mulcahy’s solo music; or via spin-off band Polaris’ sole album, which soundtracked the cult ’90s Nickelodeon show The Adventures of Pete & Pete. In this case, all roads lead to the New Haven, Connecticut band.

20 years after calling it a day following their fifth album, Portrait of a Damaged Family, the band came back together to re-release the album and celebrate 20 years of the Mezzotint record label, started by Mulcahy in order to release the album following label problems in 1996. The band kicks off a short American tour in April, with a few shows around the Northeast – including the Bowery Ballroom in NYC on April 21st – before coming to the Echoplex in Los Angeles on April 28th.

Aquarium Drunkard sat down separately over the phone with founding members Mulcahy and Mr. Ray and talked about the reunion, the issues of tackling music you haven’t played in a long time, Mulcahy’s upcoming solo album, and the virtues of wanting to sound like the Gun Club.

Aquarium Drunkard: How did the reunion come about?

Mark Mulcahy: I think the easy progression was that we ended up doing a bunch of Polaris gigs – which is everyone [in Miracle Legion] but Ray. I hadn’t played with those guys either for quite awhile. Playing with them made me think about all four of us playing again. And as much as I wouldn’t have imagined doing it, a bunch of people wanted to book gigs for us, so that plus I just think – I don’t know if there is some era of reunion. I don’t know if there’s been other reunion-eras in rock and roll, but a lot of groups from the time we were playing have regrouped as well, so, I don’t know, it just felt like taking part in a movement. [laughs]

AD: When did the reunion really come together? Was it last year or prior to that?

Mr. Ray: It was about a year ago last November. I think they [members in Polaris] were pretty shocked that people were really interested. We knew this was a different thing, because the Pete and Pete thing has more of a nostalgia, Comic-Con vibe to it. [laughs] But, I think that was what made us all think. I don’t know if I thought we’d ever play again. We said, let’s see. Will anyone be interested? Would anyone book us? Will anyone come? And then last year was amazing. I mean, bigger crowds than we had most of the time back in the day. I didn’t want to do a nostalgia thing and just play to guys my age saying ‘oh, when I saw you in ’82,’ you know. But it wasn’t a nostalgia trip at all. The audiences were great, and a great mix of male and female and ages. So it was great. So we’re doing it more.

AD: Back in 1996, was there ever a temptation to just say ‘forget it,’ in terms of the problems you had with the record label and just not put the album out?

Mr. Ray: I don’t think so. There was probably a sense of relief that we could do it. We’d made the last record, Drenched, with Morgan Creek and we wanted to do a second one with them, and I think it was only canceled a few weeks before we were supposed to fly out and record. So we had all these songs we’d worked up and rehearsed and then for two years we couldn’t do anything. It was frustrating. So for me, even though I was frustrated by the business, I wanted to record those songs. We had a really great tour, too. It was kind of like the pressure was off. It felt like we were back at the beginning and wasn’t some kind of career move; we just went out and played gigs.

AD: Is there any intention to re-issue the records aside from Portrait of a Damaged Family?

Mark Mulcahy: Well, they’re all digitally available, but in terms of vinyl or anything, I don’t think so. We just don’t have a big enough fan base. You can’t not be around and have nothing happen. Literally nothing happened during the time we weren’t around. People have things happen where they’re on a TV show or something, but we literally ended and then started. It’s hard to keep growing that crowd when you’re not doing anything. I mean, and I don’t really want to [reissue]. I’d rather keep making new records than re-releasing old ones.

AD: Ray, you and Mark are the only original members of the band at this point. You can listen to the difference from the first record all the way through to the end and hear that evolution in sound, even with the other members varying a bit. How would you describe that transition?

Mr. Ray: I think the records are all pretty unique in a way. It’s hard for me to tell if we have a sound. I always think the oddest thing is that our original inspiration was to be The Gun Club. [laughs] We were like ‘we love The Gun Club. We wanna be like that.’ But it didn’t really turn out that way.

Mark Mulcahy: We put a show on with the Gun Club in New Haven. I don’t know what it was. Seeing them operate – they had that real primitive thing. When you haven’t really done it professionally or that much, you look for things that give you some confidence. Maybe not as much inspiration in sound as that you could also do that. I’m sure it’s true of writing and everything. You see things and think ‘wow, that’s the kind of thing I want to do.’ But it’s someone else doing it quote-unquote for real and that gives you some confidence.

AD: You found your own voice that was just as much influenced by the idea?

Mark Mulcahy: Yeah, I hope so. Ray and I were sort of side-men for a long time. So being the brains of the operation was new to us when we started this band. It was the first band where we were running it. We started out on a good foot because we didn’t hav eany clue for what we were going to do.

AD: How would you describe what Ray brings to the creation process that separates Miracle Legion from Polaris?

Mark Mulcahy: For my money, he’s a real singular guitar player. So for that, a very singular writer. Even though I’m sure we sound like plenty of other bands, it’s still his style or talent the thing that makes of Miracle Legion, otherwise we’d just be me. He’s not like anything else I know. And a lot of other musicians I know say they couldn’t copy what he does. As simple as it might be, or as untrained as it is. I’ve played with people and we’ve tried to play certain [Miracle Legion] songs, and they just can’t quite get it.

Mr. Ray: I don’t know how many times I’ve been told I was influenced by The Byrds. And literally, until after that whole phase, I only really knew “Turn, Turn, Turn.” I wasn’t a Byrds fan. I think my style came out of desperation of trying to play rather than being influenced. It’s what I could play.

AD: I know it’s a difficult question to really know, because as someone who also plays guitar, I feel like if someone asked me what my influences were, I’d say ‘I dunno. I just kind of play.’ I know what music I like, but in terms of what influences me, I don’t know. Is it like that?

Mr. Ray: It’s the same. I was never a guy who wanted to learn other guys’ licks. I first played guitar and I kind of gave up. I was listening to Led Zeppelin and Yes and I was like ‘how do you play that kind of stuff?’ How do you even begin to play that? And it wasn’t until the punk rock thing came around and I thought ‘oh, I could do this.’ The learning curve wasn’t as great. The picking thing, when I look back on it, I was afraid to leave spaces. I thought somehow I had to fill up everything. Now, I realize you don’t have to. That arppegiated thing I kind of got known for, jangle-pop or whatever we’re all lumped into, I think that came out of being scared at the beginning. ‘I’ve got to make as much noise as I can.’ For some reason I was making it hard on myself, so I was playing through a clean amp with heavy strings. I was doing all these things that – if I’d just distorted the guitar, it would’ve filled things up a lot more easily. So I just played as many notes as I could. [laughs]

AD: When you started thinking about the reunion, was it intimidating at all thinking about having to re-engage with music you hadn’t dealt with in 20 years?

Mr. Ray: Yeah, it was for me, certainly, because I hadn’t done it on a pro level in a long time. Scott and David also played with Frank Black and the Catholics for about 10 years. So for me, it was like coming up to speed, but it’s different when you’re doing it for real. The first time we rehearsed, I don’t think anyone had a clue. I hadn’t seen those guys in a while. So it was kind of weird. But it instantly fell together. It was only occasionally where someone would have to go ‘what’s the next chord?’ It was all kind of there and came together kind of easily.

Mark Mulcahy: Yeah. I wasn’t sure about doing it at all, but one of the good things about it was doing songs I’d played a million times, but hadn’t played in a long time. I’m happy to be playing them again, every night we play them. I don’t remember them being a challenge when we originally played them, but now, for some reason, they feel like a challenge.

AD: Is it that that music comes from a different place in your evolution as a writer? So it’s trying to find a way to channel an older version of yourself?

Mark Mulcahy: Eh, it’s probably something like that. But it’s also that [the songs] live on some pedastal. I don’t want to do it poorly. I don’t want to do any of this poorly. We decided we would practice a bit and if it felt wrong, we were going to try and get out of it somehow. [laughs] But we didn’t want to do it badly. I wouldn’t say we’re the greatest band in the world, but it did feel pretty good. We’re reasonably satisifed with ourselves. [laughs] I just like those guys and I like playing with them. If you have a way to get that going again, that’s a great feeling.

Mark Mulcahy: Yes. And I’ve had everything on hold while doing Polaris and Miracle Legion. I think people would say the same thing. Everyone wants to put records out. I do. When you’re not putting one out, you’re pushing to get one out. I don’t know that it matters, but I separate these into three different things. It’s the same guy and it all sounds the same probably, but I look at it as three different things and I’m looking forward to getting back to myself who I know the best. [laughs] words/j neas photo/Kenneth Bachor