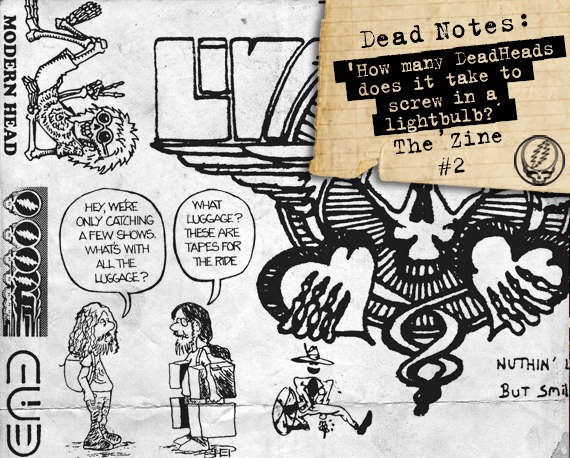 There was a time when yellow envelopes stuffed to the gills with Maxell XL2s and patchouli-soaked trading lists were the norm. Maybe those packages would lead to being invited to a fellow head’s apartment or dorm room for all-night dub sessions or back room trades at your local head shop. With those tapes came new friendships, show and band recommendations, and stories. Those stories came in both the handed down and first hand varieties — always a little embellished or missing parts, until you heard them again from the same source or another. Tour mayhem, good times (excessive and transcendental), life lessons, our boys (THE DEAD!) and more — no subject was left untouched. Over the decades, tapes turned to CD-Rs, CD-Rs turned to torrents and MP3 downloads. Technology advanced, but the stories? They began to disappear.

Thankfully, when archive.org was founded they started to be collected again in the comments sections. Sure, most people ignored the comments in their frenzy to get another show into their ears, but some of us read intently. ’€¨As is always the case, Deadheads adapted to new technological platforms quickly, utilizing social media the way followers of the band always have: to connect to each other. In late 2014, in a Grateful Dead fan group on Facebook, I came across a note from a guy stating he was looking to find his tape collection a new home. I met Charlie C. in Cape Cod a few weeks later. As we sat at a bar with his wife (who was astonished to meet such a young guy so into the Dead) he regaled me with story after story of shows he saw. I still get goosebumps when I think about him sharing an anecdote about Pigpen sauntering past him at his first show, right before he jumped on stage to deliver one of his nightly sermons. Later, we went out to his car and he handed me over his entire collection of tapes -— hundreds of them, meticulously labeled with unique covers and a story contained within each one. In a separate bag were old issues of Relix, Golden Roads, Dupree’s, and Deadbases, along with a stash of stickers and pins. It was the kindest gift I’ve ever received from a “stranger.”

But of course, Charlie’s no longer a stranger. Now he’s one of my best friends. An email or text from him is bound to be filled with laughs or a list of other things to check out. This ‘zine is dedicated to him. He put me on the crazed path of collecting Dead tapes again for the first time since 2000. All that resulted in our second Dead Notes zine, available for download in its entirety here. There’s more to come: there are still countless pieces of unseen artwork and stories from the Dead community yet to be shared. words/d norsen

On April 20th at the Bootleg Theatre in Los Angeles we are excited to partner with Liberty Hair Farm to present Grateful Shred who include members of Cass McComb’s band, Neal Casal’s Circles Around the Sun, and local favorites Austin McCutchen and Mapache. We have two tickets for who ever can tell us their best and or favorite Grateful Dead joke. The winner will be contacted on April 19th.