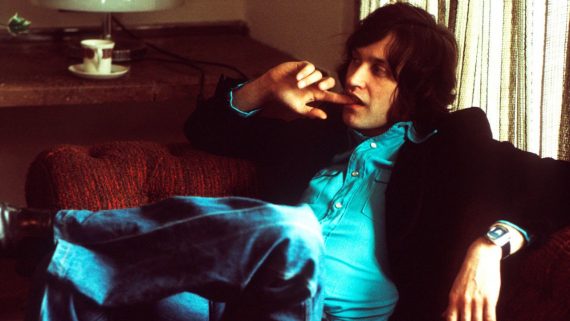 For Kinks guitarist Dave Davies, music isn’t an intellectual pursuit. In Davies’ mind, creation is a purely instinctual action, not a result of the brain so much as the gut.

“When you first start to get into music, you write something and if it feels good, maybe it is good,” Davies says over the phone, reflecting back on the early days of the Kinks, the legendary rock & roll band he formed with his brother Ray in 1964. In the years since those nascent days in Muswell Hill, the Davies brothers have feuded off and on, but Dave’s reputation as a hard rock and punk pioneer has only solidified. His raw guitar sound has inspired countless followers, including Ty Segall and Chris Spedding, who both appeared on his 2013 solo album I Will Be Me.

But Davies’ latest is a more personal, stripped-down affair. Called Open Road, it was recorded with Dave’s son Russ. Though the two have collaborated together for years now, the record marks a shift from electronic experimentation to more traditional singer/songwriter format. AD spoke with Davies about the record, some recent Kinks demos, his attraction to metaphysics, and abiding love of science fiction. Our conversation has been condensed and edited.

Aquarium Drunkard: You’ve collaborated with your son Russ for quite a while now. But Open Road is different than your previous collaborations. How did it work, melding your sensibilities as a songwriter to Russ’ more electronically-focused angle?

Dave Davies: We’ve wanted to do something more in the vein of a rock album…[Russ] was really keen on getting into this new area.

AD: What’s it like writing with your son? As a songwriter, part of your job is to get somewhere very vulnerable and open. Is getting to that space  with your son interesting?

Dave Davies: Russ is a very confessional, very sensitive musician, so it was comforting to work within that trust. The two of us working together helped emotionally; I wasn’t so worried about opening up to him, he knows me pretty well. I could trust him with my thoughts and feelings and likewise. There’s a line on “The Path Is Long” that goes, “You and I/We need to trust.” I really hooked into that. Trust is important when you’re working so closely on a project like this, or any creative project. That trust element totally freed us both up to try things out.

AD: There seems to be a theme of “family” running through your work. You founded the Kinks with your brother Ray. And while it’s difficult to pick a favorite Kinks record, most days Muswell Hillbillies is my favorite. On that record you were drawing from the people around you and to some degree, your own family history.

Dave Davies: Ray and I were obviously very influenced by country music, especially in the early days, with Hank Williams, Earl Scruggs, Lester Flatt. But the heart of the album, the theme really, is about a family having to move to another part of the city, focusing on tales about different characters in the family and what they did. It’s one of my favorites too, along with  Arthur. I like them all for different reasons, they’re very different from each other. That’s been the joy of being in a band like the Kinks. There’s a wealth of ideas me and Ray can draw from, including our childhood, our family.

AD: On this new one there are a few songs – I’m thinking of “Don’t Want to Grow Up” and “Love Has Rules of Its Own” particularly   – which evoke the Kinks. Was there any point where you wondered if some of these songs could be Kinks songs? Does that thought cross your mind when you’re writing?

Dave Davies: Yeah, now and again. Of course it does. The Kinks are such a big part of my spirit and my experience. I’ll work on a song and imagine, maybe, the Kinks doing it. But I find the ideas on this album very personal, as does Russ.

AD: You and Ray recently recorded some Kinks demos, right?

Dave Davies: Yeah, early last year. We recorded a few songs, just got some demos going and [traded] some ideas. Then Ray went off to work on his new solo album and I got happily into making Open Road. It kind of got interrupted, we put it on the back burner a bit. Maybe we’ll get it going at some point and have a look at these songs and say, “What do you think?”

AD: There’s a song on the record called “Chemtrails,” which features a  pretty interesting set of lyrics. Are you interested in fringe ideas and conspiracy theories?

Dave Davies: To a point. When Russ came up with that idea, it piqued my interest. I am interested in what’s behind the veil, you know? I’m drawn to the idea that nothing is as it seems, it’s never been. [Laughs] I’ve always been one of those personalities that likes to look behind things. When Russ came up with those ideas, I did some research…about what chemicals chemtrails actually contain. I wrote this big long thing — almost an essay — and tried to squeeze it all together. Russ suggested we write simpler lyrics. You can express profound ideas with sound and just key words. With poetry, you don’t go A to Z with ideas. With songs, you can provoke ideas in people’s minds with what you say and the emotion of the riff or the mood. After we banged heads a bit regarding where we were going with it, but we came up with an approach. 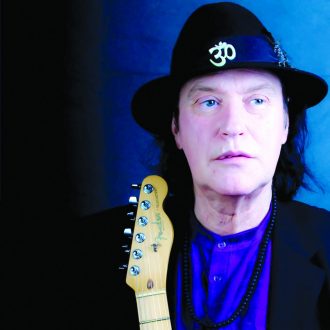 AD: It’s very easy to imagine some dark force controlling everything these days, but with that song, it feels like you’re using the language of conspiracy theories more metaphorically, not necessarily in literal terms.

Dave Davies: I think that’s a big mistake we all make as human beings. We start looking for definitive answers to the questions that trouble us, when sometimes [we could approach those problems by] becoming more artistic or poetic. Our language is very limited. We’ve got science and technology, but a lot of meaning is misinterpreted in language. [That song’s] not just about the scientific compositions of chemtrails. It’s about lots of things: it’s about the times we live in, the mood of the people. It’s got spiritual overtones, as well. A kid walking in the country, and [how] we look up and we’re amazed and inspired by the stars and the countryside and the animals. It’s about inspiration. I hope it leaves people with a notion about hope. There’s a line we worked on in the song — “The days of innocence are over.” But at the same time, I feel we have solutions to our problems. They might not be linear or scientific solutions; they might be other-dimensional ways of viewing the world, if you catch my drift. We wanted to leave that experience there for the listener.

AD: Have you always been drawn to metaphysics?

Dave Davies: Yeah. Even as a kid I didn’t always believe what people told me. I didn’t do very well in school because I didn’t always trust what I was being told. It was a different era, but I didn’t like that browbeating. Kids today have a whole new set of problems than what I had. I always had a distrust of authority. Why are they talking down to me? Are they hiding something? Those feelings were with me from an early age. That’s why I got interested in psychic things, spiritualism. What really helped me was yoga. It’s kind of spiritual science in a way, trying to center your mind and emotions and your body together, which more and more are pretty fragmented. You have your spirit life, your mental life, emotional life, and your physical life – and it’s all about balance. It sometimes takes a lot of work to try and pull our bodies back together.

But our imaginations are incredible, they are a wonderful tool for analyzing and expressing the universe. I think we should also trust our sense of feeling more about ideas. Our language is very limited when you get into it, sometimes we can learn so much more from feeling than any book. A book can point a finger in a direction and give you inspiration to seek out something else, but it’s only through direct experience that you understand. There’s a yogic idea of direct knowledge. You focus your mind and get your information from your own feelings, soul, and mind. Those areas of the human system really interest me. We’re not just fleshy robots. Well, I don’t think so. [Laughs] We are robotic in a sense, of course – the human body is a mechanism – but it’s also contains a lot of history. Our bodies are ancient, more ancient than our minds…I think with my feelings a lot.

AD: You wrote one of my favorite songs of all time, “Strangers,” from Lola Versus Powerman and the Moneygoround, Part One. That lyric, “We are not two/We are one,” illustrates what you’re talking about, about how an idea paired with music can perfectly capture the human predicament. We’re so willing to recognize each other as strangers, but we’re not. We’re connected. That lyric is great on paper, but it has to be sung with that melody to take on that full resonance.

Dave Davies: Of course! That’s the art. We need that different language to communicate with. Because we’re not doing too good with the language we’ve got at the moment, I don’t think. Music can help us communicate better. When you can listen to someone’s emotion through a melody, it can move you. Music has inspired me, so it’s got to do the same for everyone else.

AD: You’re drawn to the idea of art and music being able to provide a more imaginative response to life.

Dave Davies: It’s totally important. It’s that heart feeling. Sometimes we understand what’s happening to us through our heart. We try and explain what’s happening to us, but maybe the heart already knows. Why are we trying so hard? I think we just need to reach out, maybe it’s as simple as that.

AD: Because rationality can only take us so far?

Dave Davies: We think it’s everything — logic and reason. That’s why I love that Spock character in Star Trek. What a great piece of theatre that is, to introduce a character like that. He thinks he knows a lot more than everybody else, but he’s faced with the dilemma of humanness. And Data [from Star Trek: The Next Generation] takes that a little bit further. He is actually a robot but he’s saddled with coming to terms with what it is to be human, and the desire to be human. I think it’s a great piece in the puzzle to put those characters into stories. I think Gene Roddenberry was an absolute genius.  All of these fabulous characters are telling us about deeply profound issues of consciousness, even that ego-centric James Kirk. You can’t just take that as flat, two-dimensional fun. They are deep stories. It’s like a person painting a picture about what we’re all thinking collectively, illustrating one aspect of humanness – like the painter Turner or van Gogh. You look at it, and look at it, and look at it, and you get the sense that maybe he was trying to express what was in us all, that a part of us is all connected. words/j woodbury

Aquarium Drunkard is powered by its patrons. Keep the servers humming and help us continue doing it by pledging your support via our Patreon page.

One thought on “Dave Davies :: The Aquarium Drunkard Interview”