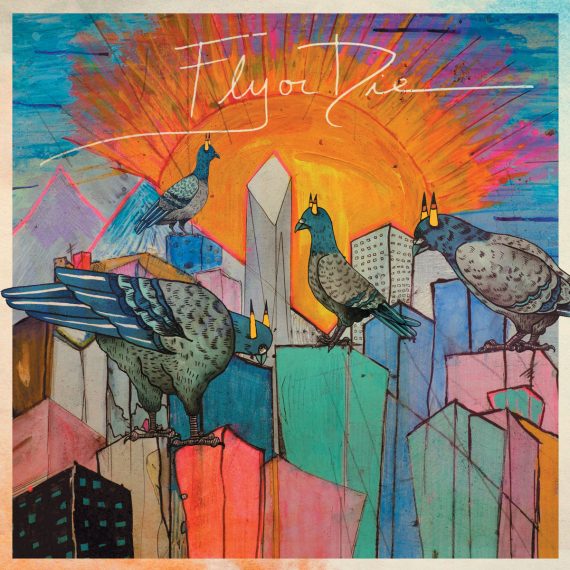 Fly or Die is trumpeter Jaimie Branch’s debut album as a bandleader, but she’s no new sensation. For more than a decade, she’s worked alongside artists like TV on the Radio, Spoon, and William Parker, all the while honing the sound that blooms on her new LP.

Though she’s currently based in NYC, Branch came up in Chicago, and the genre-averse quality of the record speaks to her roots there. Blending jazz, folk, drone, and electronic music in an improvisational fashion, Branch and her group — which includes drummer Chad Taylor, bassist Jason Ajemian, cellist Tomeka Reid, and guests — operate with avant-garde curiosity and thrilling, spontaneous energy.

“If I weren’t a musician, high, high goals would be like, criminal, you know, a good one,” Branch jokes at the beginning of International Anthem’s short documentary about her career, but on Fly or Die she plays like someone making a getaway, fueled by adrenaline and on the run. Stream the album below and check out our conversation with Branch.

Aquarium Drunkard: Fly or Die seems to be a conversation about Chicago — about the music freedom you discovered there. How did the Chicago scene shape your approach to music?

Jaimie Branch: I was really lucky to come of musical age in Chicago. Chicago wears its heart on its sleeve — there’s not a lot of pretense. There’s a lot of value placed on making honest music at the highest level. When I say the highest level, I don’t mean technique necessarily, I mean an elevated state. There are musicians in Chicago who consistently transform the space that you’re in when you’re listening to them. So I’ve definitely taken these lessons to heart. I’m trying to make music that’s honest to who I am with my friends, who also happen to be burners. There’s also a toughness to Chicago. “Who cares if you don’t like my music. Don’t like my music then.” I feel that if I came to New York City as a youngster, I might have gotten confused, because I think it’s confusing here. There seems like there’s a hierarchy, and when one notices a hierarchy, one might become preoccupied with the idea of ascending said hierarchy. But because I came up in Chicago, I know that that hierarchy is fake. So I listen, and I trust myself.

AD: You’re based in New York now. What does a typical day look like for you now?

Jaimie Branch: Well, I work…kinda a lot. I rock three day jobs right now, I am the counter-lady at Court Street Grocers Hero Shop in my neighborhood of Red hook, Brooklyn; I am a fish monger in Union Square on Wednesdays; and I teach private trumpet lessons. So, I wake up at 7:30, walk the Patton-dog, work 8:30-5:30 and then walk Patton — then it’s off to the gig, or rehearsal, or bed! I try to get my long tones in before 10 PM, but time is definitely a commodity in NYC! When creating the music for Fly or Die, I worked in sustained spurts of energy. Some of the music is transcribed from the first gig Fly or Die ever played. One theme was written the night before our first rehearsal, which was after our first gig, and I’m talking about “theme nothing.”

AD: You’re attracted to “free” music and the potential it has for expression. You’ve worked as a sideman for indie rock projects, but do you find that for you personally that freedom is best illustrated through jazz? Can an indie rock song feel as free for you as leading a quartet with your trumpet? Can noise or hip-hop feel free in similar ways?

Jaimie Branch: All music offers freedom. That’s why we need it. But everything is relevant, right? So life and its differences exist in gradients. There is a lot of freedom when you write and perform your own music, which seems in stark contrast to playing parts that another person wrote for a rock project that isn’t yours, but this isn’t necessarily so. The freedom when I play someone else’s music is in finding the space where the music really soars.. and that’s the same when I’m writing and performing my own music, I just really want the music to tip forward — to take flight. (Not to push this analogy too hard, but you know…)

AD: Fly or Die feels whole and complete. You’ve been playing professionally for a decade or so now. Do you think you needed that time to really cement what you wanted to say as a solo artist? I know the question sounds abstract, but why is “now” the right time for Fly or Die?

Jaimie Branch: I’ve been playing the trumpet for 24 years now. I’ve been playing “free music” for over a dozen years now. I think it takes time to marinate, to get seasoned enough. Personally, I definitely needed time to develop. I have been writing in a similar compositional style for about five years now, but this music with this group of musicians really feels like a complete statement. I’m not sure if it’s a cumulative statement, but it is definitely a comment on a particular place and time. I think I got lucky again in meeting the folks from international anthem just as this band was forming. I think a lot of disparate factors need to coalesce to really make a product worth consuming…Or maybe we’ve just been marinating for the right amount time.

AD: The record is pressed on “pigeon shit” colored vinyl, which is hilarious and I think speaks to your sense of humor. Why that color? What deep meaning should we infer (or not infer) from it?

Jaimie Branch: Once I knew there would be pigeons on the cover — and I knew fairly early, having thought of the idea — I knew that I wanted the record, as in the vinyl itself, to mirror that imagery. One of the perks of living in New York City is that I can do a real complete case study on the subtle variations of pigeon shit to pigeon sh*t to pigeon sheeeet. What the fuck are these pigeons eating? We are almost all sold-out of the special edition vinyl, but if there is a re-press, and I’m not saying that there will be, but if there is, maybe, just maybe I’ll get to share some more of my research. Also, it looks cool.

AD: The record’s title seems to reflect an imperative: do or don’t, act or fade away. What kind of statement did you want to make with the title and theme of these recordings?

Jaimie Branch: The music, in part, is a reflection on a particularly hard period in my life. At times it felt like if I didn’t lift myself up, I might just fall down for good.There’s a lot of complacency right now. People are getting further and further away from holding each other up. And we really need each other right now. Fly together or die apart. I choose fly, wont you fly with me? | j woodbury