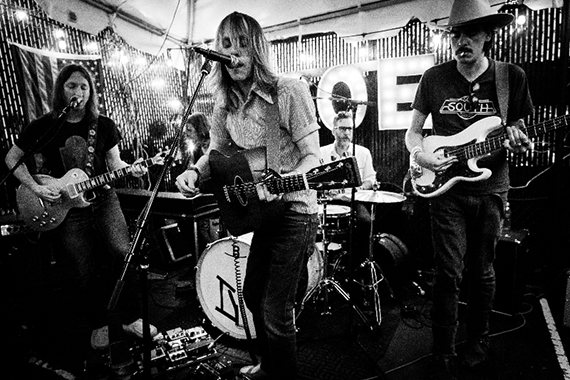 What do Gram Parsons, Tom Petty and Brent Rademaker all share in common? You guessed it — the Sunshine State that is Florida coupled with a deep fascination of country rock. All three soon jettisoned to the West Coast where they soaked up the better sun/bigger waves. While Gram haunts the desert of Joshua Tree and Tom continues to explore his Byrdsian jingle-jangle obsession — Brent has reinvented himself time and time again with album after album of cult classics with his groups Further, Beachwood Sparks, The Tyde and his most recent GospelbeacH whose sophomore album Another Summer of Love comes out this June on Alive Records.

Aesthetically, what sets this one apart from their debut, Pacific Surf Line, is the sound: more 70’s FM rock than 60’s AM gold. Rademaker’s writing continues to evolve becoming tighter and poppier with a warmer more classic rock feel, nodding heavily towards early power poppers Cheap Trick, Big Star and fellow Floridian ex-pat Tom Petty. Not to worry, those sweet vocal harmonies are still there (along with the cascading guitar solos) but they are filled out with lush instrumentation from stalwarts guitarist Jason Soda and Jonny Niemanns. Some of the City of Angel’s finest also guest on the album including Pearl Charles, Miranda Lee Richards, members of Wilco, Mapache and Eels giving the album that communal vibe that was so omnipresent back in the glory daze. words / d norsen

2 thoughts on “GospelbeacH :: Another Summer Of Love”