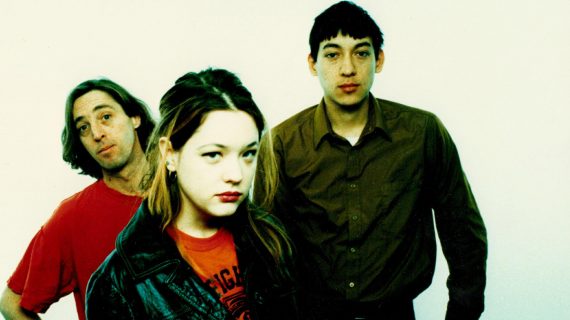 Led by Mary Timony, Helium was one of the great ’90s guitar bands. On records like 1995’s The Dirt of Luck and 1997’s Magic City, Timony and co. created deeply personal and catchy indie rock, blending in progressive textures and expressive guitar work as the band went on.

This week, Matador Records reissues both records, pairing the latter with the No Guitars ep. Additionally, the label’s prepared a double lp collection of b-sides, demos, and rarities called Ends With And. Taken together, the discography helps make a case for Helium as one of the most idiosyncratic bands in ’90s indie rock, whose work sounds fresh and engaging in modern context, and positions Timony as a true guitar hero, “the only human being to make a Paul Reed Smith seem cool,” Gerard Cosloy writes in the liner notes of Ends With And.

This summer, Timony presses pause on her phenomenal band Ex-Hex to tour as “Mary Timony Plays Helium.” We spoke to the guitarist and singer about reevaluating the work of her former band, re-learning her own songs, and what the creative spirit of the ’90s was like.

Aquarium Drunkard: How has returning to Helium’s music been for you?

Mary Timony: It was cool. It was a real treasure hunt. I spent a month or so just kind of going through stuff I’d saved in tupperware bins in this basement and attic. I was looking for stuff I remembered I might have. It was a combination of racking my memory and searching things I’d saved. It was pretty fun; you always feel like you are hopefully saving things for a reason, that it’s not just junk. [Laughs]

AD: What kind of person do you hear playing and singing on those records?

Mary Timony: It’s always hard to hear yourself. I’ve never liked listening to stuff I’ve done, especially stuff that was done quickly… it’s never pleasant. [Laughs] But so much time has gone by, I’m on the other side now. I’m able to be a little more objective. It’s almost like listening to another person. The early Helium stuff I’ve always been embarrassed of, because my singing was not that great. But around The Dirt of Luck I start to feel okay about it.

AD: You started Helium after your Dischord band Autoclave had ended. Did you have an idea of what kind of band you wanted Helium to be?

Mary Timony: My experience in Autoclave wasn’t the same – we really only left DC one time for a three or four day tour. We weren’t really a working band, necessarily. But when I started playing with the guys from Helium, I think we were trying different things out at first. Shawn [Devlin] and Brian [Dunton] kind of had a style they played in from being in Dumptruck, playing in a late ’80s kind of pop/Americana style. I was coming from this place where I’d gone to music school, but I was playing in the D.C. hardcore scene. I didn’t really know what kind of music I wanted to make. I knew I wanted to be loud; when I was 22, I was writing singer/songwriter songs on acoustic guitar. That’s my least favorite musical phase of my whole life. But I tried out a few different things, and I think around the time I was 25 and we did The Dirt of Luck, I finally found things that worked for me. A sound I felt good about.

AD: I read a great interview with you in She Shreds. You talked about liking Joe Satriani and Steve Vai early on. That was pretty early in your development, right?

Mary Timony: That never came out in my music. But I did go to an arts school, a music high school. I practiced guitar five hours a day for a couple years. It was the ‘80s, so I got into that stuff for sure. Even Yngwie Malmsteen. I went through that phase. I just wanted to be a good guitar player. But I kind of came out of that. [I was] practicing and learning other people’s music in school and [but I wasn’t] as excited about the technical stuff as I was about being creative. I liked both sides, but I got into music school and I started practicing classical guitar. Toward the end, I had this moment where I realized I don’t want to learn other people’s music. I want to play my own. The part of me that’s a creative person is bigger than the part of me who wants to be a guitarist. I felt like I had to make that choice. But I think what happens in life, as an artist, is you go back and forth. Your focus can shift around. [It’s about] whatever is feeding you at the time. I realized I don’t want to be in music school anymore. I don’t want to be a nerd. [Laughs]

AD: But, and this one of my favorite things about Helium, that nerdery comes out in the jams. It’s one of the things that made Helium such a unique band.

Mary Timony: A lot of that was also Ash [Bowie] – a lot of the jamming stuff. He’s fucking awesome and a real genius. He really pushed the band to be out there musically.

AD: I spent most of the ‘90s listening to really goofy stuff; I didn’t get into indie rock until the ’90s were done. So my perception of the era is informed by magazines like Spin and Grand Royal , and I realize I might be slightly idealizing the time. But in the ’90s, there seemed to be a lot of creative space for bands to exist, to do things that didn’t fit in easily into categories. Did it feel that way for you in that sort of post-college rock/post-hardcore space?

Mary Timony: There’s a couple parts to how I see it. The first thing you could say is, you know, there was no internet. It wasn’t easy to be influenced by and reference music you were interested in. It wasn’t as easy as it is now, when you can just look it up on you iPhone. You had to work a little harder to be physically influenced by things. I think there was almost an element of being influenced by [reading about something and] imagining what it sounded like. I think people were still in phase of trying to make new rock, music that hadn’t been made before. [You were] trying to create your own thing, more that now. Because now, all types of music exist at the same time. You don’t feel like you’re in your own space as much anymore.

At the same time, I’d say living through the ‘90s, there were so many bands that sounded exactly like [each other]. People were much more conformist. Now, since people are exposed to so much, there’s all sorts of genres happening at the same time. When I was in my 20s playing in rock bands, all bands in D.C. sounded pretty much the same. North Carolina – there’s a scene there. Louisville, everyone is playing the same kind of thing. Everyone sounded similar. People were separated by genre. If you lived in a certain town, you probably sounded a certain way, more so than now.

But I do think there was more of a feeling of rock music still going somewhere new in general. People are obviously still taking music new places…but you have to really want to do that, where as back then it was like you’re making rock music and it’s [automatically] “new music.” It was the ‘90s, and it was a new thing. The ‘60s were new, the ‘70s and ‘80s were new, and the ‘90s felt the same way, although maybe not as good. [Laughs]

AD: In the early 2000s there was this whole rock is back thing, but all those bands sounded specifically like ‘60s or ‘70s bands, you know?

Mary Timony: We’re just repeating stuff now. But of course there are people doing their own, entirely own thing. People are making up new forms now. It’s just more splintered.

AD: You’ve been learning Helium songs to take on tour. Has has learning them compared to the stuff you write for Ex-Hex?

Mary Timony: It hasn’t been as hard as I thought it would be. One of the jobs I do is teaching guitar, so I learn a lot of guitar parts. I’ve just kind of treated it the same way. It’s like learning covers, but it’s weird – they’re like covers I know really well. There were weird things I thought I should remember, but I have no idea what I did. It’s taken some effort, but it’s actually kind of fun. words/j woodbury