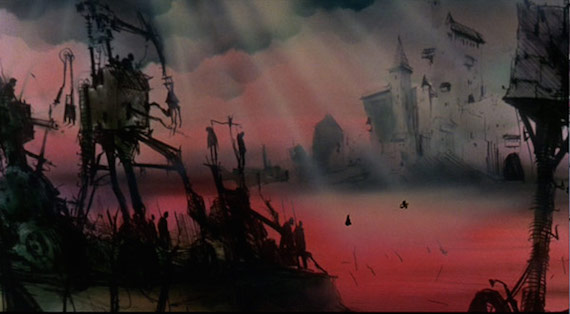 (Welcome to Videodrome. A recurring column plumbing the depths of vintage underground cinema – from cult, exploitation, trash and grindhouse to sci-fi, horror, noir and beyond.)

In a more civilized age before digital effects and “always on” video streaming, cult cartoons were radioactive contraband. They were hard to find and dangerous to possess. Respectful Americans didn’t take kindly to perverts back then, and they sure as shit didn’t celebrate gory claymated sex-craft.

Now days scuzzy is cool, or at least more out in the open. In a world where donkey shows and goatse pass as office-friendly humor, sometimes it’s hard to find a real taboo. That’s where underground animation comes in handy. After all these years, there is something still unsettling about watching a cartoon disembowelment.

Walt Disney and the Art of Animation, a 1958 gospel on the medium, defined animation as the process of creating “the illusion of action or change.” The key word here is illusion. Animation is a form of sorcery. Unencumbered by the limits of live action, animation designers are roving necromancers who breathe life, and death, into stories and concepts. Theirs is a genre capable of wild flights of delirium. But thanks to Pixar and Dreamworks modern animated cinema has been hijacked by sophisticated and nuanced family entertainment. Wall–E and Up will even make you cry. In rare exceptions–shout to Cartoon Network’s Adult Swim–slapstick comedy and irreverent parody are the reigning formats.

None of this will scare you or unsettle you, though, and that’s a shame. As escapist entertainment goes, nothing beats animation’s raw potential to defile your soul. Beneath the smiles and songs lies the true face of animation. That is, a long and beautiful legacy of darkness, where the infinite promise of the pencil exalts in the macabre and psychotic.

Whether via traditional cartoons, digital effects, puppetry or stop motion, we salute the demented stewards of the cult animation game, without whose radical efforts we might never have contemplated our own corruption. We offer up this list as a blood sacrifice. words / j campbell 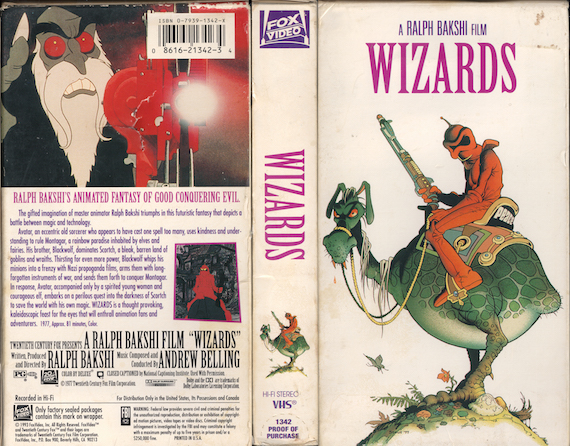 Wizards (1977) Ralph Bakshi is a visionary weirdo and proverbial bad kid. Controversial maker of X-rated satires and exploitative cartoon trash, Bakshi had a slime trail of plundered innocence behind him when he made a career switch to science fiction and fantasy in the mid-1970s. Despite building a solid catalogue of genre gems thereafter, including his loved and loathed attempt at doing visual justice to Tolkien’s Lord of the Rings, 1977’s Wizards stands out as a milestone of animated experimentation.

Facing budget and resource constraints, Wizards‘ debuted Bakshi’s rotoscoping technique, an innovation that imposes traditional illustration onto live action sequences and photography. The hallucinatory result was incomparable to other forms of contemporary animation.

Beyond the optics, though, Wizards dealt in holocaustic dystopia, bending traditional sword and sorcery fantasy tropes into an unconventional study of science vs. magic and the disturbing power of Nazi propaganda. Think barbarian wars under swastika banners. 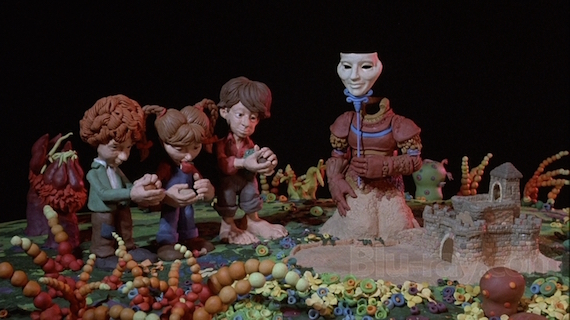 The Adventures of Mark Twain (1985) What sounds like a swashbuckling riverboat romp with colorful bucolic characters and Mark Twain’s folksy wit…is not that at all. This film is far more sinister, quickly spiraling into an interdimensional stop-motion fantasy chronicling the angst of a tired soul, as it travels down its lonely path toward the endless void.

Mark Twain, sickened by fellow man, decides to fly an airship into space and crash with Halley’s Comet. When he discovers that Huck Finn, Tom Sawyer and Becky Thatcher have snuck on board, he doesn’t turn the ship around to let the innocents off. Instead, he uses a magical time portal to present them one by one with a series of ominous vignettes, each offering a haunting excerpt from some of Twain’s most existential and terrifying literary ponderings. This is a desperate, dangerous Twain at the end of his rope.

Writings portrayed include The Damned Human Race and The Diaries of Adam and Eve, as well as an A+ Scene from The Mysterious Stranger, where a masked angel called Satan conjures a kingdom out of thin air and then calmly murders its entire population in front of the children.

Melancholy Twain quotes abound here, such as the following gem after a near death brush with a bloodthirsty Injun Joe: “I realize that from the cradle up I have been like the rest of my race, never quite sane in the night.” These kinds of comments are a worthy reminder that this film received a G rating.

Bonus track: The claymation team responsible for this madness also produced some holiday TV specials in the late ‘80s. Ostensibly for children, they are horrifying. A Claymation Easter follows an unscrupulous pig looking to make some extra cash by murdering the Easter Bunny and then disguising himself as a rabbit to try and win a try-out for the Easter Bunny’s replacement. Watch it on YouTube. 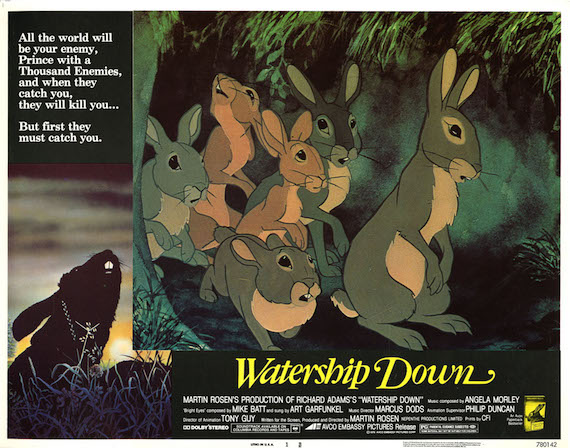 Watership Down (1978) Psychic visions, class warfare, fascism, colonization, mundane violence and nature’s cruelty clash with themes of love, family, social order and the tendency of all sentient beings toward freedom. All in a cartoon!

This unconventional adaptation of Richard Adams’ beloved novel of the same name follows rabbit Hazel and his telepathic brother Fiver, who lead a pack of rabbits across a landscape of terror and deceit in search of a happier, freer life.

Original music by Art Garfunkel backdrops colorful illustration and a vintage British script, which recreates a kaleidoscopic micro-culture and mythology of a race of wild rabbits. But do not look for floppy-eared bunnies here. This is Hobbesian barbarism on a scale that makes Naked and Afraid feel snuggly.

At turns cynical and forgiving, suspenseful and profound, Watership Down teeters on the edge of what’s appropriate viewing for hopeful young minds. It’s Animal Farm meets The Secret of NIMH (another animated delight that has aged creepily), and a thoughtful piece of cartoon entertainment.

Bonus track: The same folks got back together a few years later to create The Plague Dogs, a relentlessly grim, PETA-friendly death adventure in which two dogs escape from a laboratory and search for freedom and the truth of their “condition.” You know how that’s gonna end. This 103-minute vein-opener will scar all children under 90 for life. 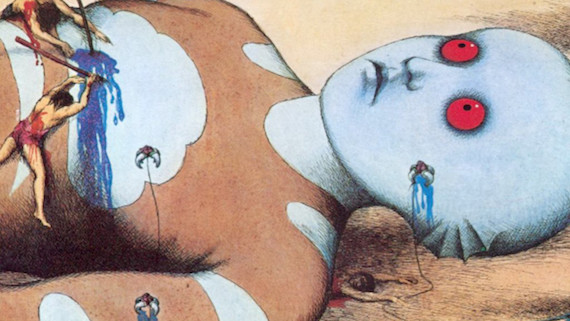 Fantastic Planet (1973) Life is cruel and survival is everything, on earth as it is on Fantastic Planet. In a caste system of giants, critters, spirits and slaves, bottom-feeding humanoids risk everything to break the chains of their masters.

Outgunned and out-brained, the mortal race of Oms unquestioningly serve their tech-savvy, overgrown demigod rulers the Draags until the day one of these primitive screwheads steals a knowledge giver. A countercultural fable about the power of education and transparency to overcome authoritarian oppression, La Planî¨te Sauvage is plainly drawn in peroxide-washed color and animated crudely. But this French-Czech classic is loaded with trippy, ambient sounds and psychedelic jazz riffs that help pace the heavy political and philosophical symbolism. Above all, it’s an alien work of fancy and an ideal Friday night choice for teenagers who enjoy smoking weed and starting revolutions. 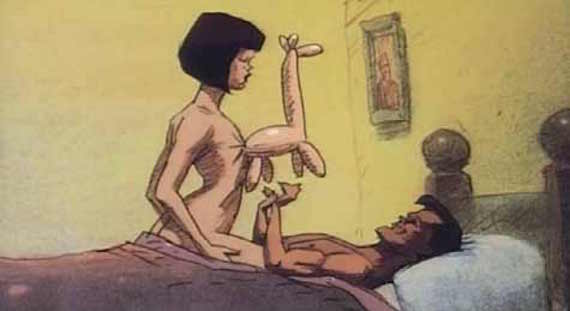 I Married a Strange Person! (1997) Bill Plympton’s illustrations are unmistakable. They breathe and move and invade you in ways that fill your heart and loins with venereal fear. His writing is black as the night and rife with distrust, cruelty and shock: the kind of material that makes you hate yourself and love your mistress. I Married a Strange Person! is a crowning achievement in meshing scratchy crayon with fun-loving social mockery.

Two birds, humping in mid-flight, have an orgasm and crash into a satellite dish, which fires a radio wave at Grant Boyer’s neck and creates a skin growth with the power to make his thoughts become real. Boyer first puts his newfound talent to work by cloning his wife in bed so he can have a foursome with her. He makes a standup comedian extract his own organs on stage and juggle them for the crowd. He sings, dances, shape-shifts, mutates and mutilates himself, his in-laws and others in incidental acts of illusory fun, being careful never to cause real harm. Then the Smile Corp Corporation takes notice of him and machine gun body part battles ensue.

For the rest of your life, you’ll be hard pressed to find a better mix of gratuitous sex, “splatstick” gore and catchy, acoustic guitar singalongs. Everyone and every thing bends over, bangs, bellows and blows in this one.

Bonus track: Google the works of Bill Plympton and spend some time with his illustrations to get a sense for what he does. Or just click here or here.

The Dark Crystal (1982) If you were a kid growing up in the 1980s, at some point you probably saw The Dark Crystal and there is a good chance you didn’t fully appreciate it – other than the night terrors it left you with. Watching even now as an adult, it’s still difficult to have any idea what is going on in this animist fantasy spirit journey.

Skeksis, or large reptilian eagle wizards, plan to break their psychic links with the benevolent troll shamans known as Uru Mystics, so that they can enslave the astronomer planet Thra and enshroud it in shadow. Unless, in fulfillment of the prophecies, a genderless half-breed Gelfling can quest across enchanted forests and subterranean wilderness to replace the shards of the dark crystal.

Though best known for Sesame Street and the Muppets, Jim Henson was clearly disturbed. Some of his early, experimental short films nod to a man with inner demons. Plus, he graduated college with a degree in home economics. But Henson’s gloom is nowhere better represented than in the first few minutes of screen time of The Dark Crystal, a towering work of animatronic horror and visual inspiration. Even if the story gets lost in the Ouija mythos surrounding it.

Bonus track: For whatever reason, there was a five-year period in the early ‘80s when major Hollywood studios decided they needed to make more American kids shit their pants. The Black Cauldron, Labyrinth, Time Bandits, The Neverending Story, Legend and The Last Unicorn were among the litany of menacing features billed as children’s fare. All of them would fill you with creeping dread if you learned that your child was watching them unsupervised, which is why you should let them.

Further Viewing/Weirding — An Assortment of Shorts

Feast your eyes on these eye-popping featurettes you can watch in between emails at the office. Packing a lot of filth, insanity and provocation into a few minutes of viewing, the following short films are also free.

Proving once again that brevity is best, Chainsaw Maid is seven minutes of pitch perfect zombie horror. The claymation is beautiful and bloody.

Green-eyed temptress lures innocent bystanders into a house of gore and experiments on them as part of a twisted mother fetish.

Were these creatures the inspiration behind the noir cult favorite Dark City? It’s possible. Also, the sound effects are phenomenal.

The Man In The Lower Left Corner of the Photograph (1997)

A rotting corpse, still living, sits alone in his desiccated flesh house staring at an old photo and reminiscing about past evils gone by. Until he decides to make a human maggot demon to mate with.

10 thoughts on “Videodrome: The Bizarre & Bewitching World of Cult Animation”