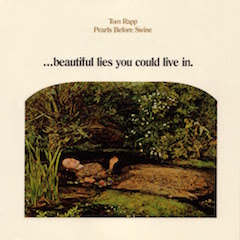 “Island Lady”, via Pearls Before Swine’s 1971 album Beautiful Lies You Could Live In, was described by its author, über-hippie turned civil rights lawyer Tom Rapp as “starkly bleak” in the liner notes to a later live collection (The Wizard of Is.) Yet, in starkness, even in bleakness, there can sometimes be beauty. Though it’s a far cry from romantic songs such as its almost-namesake Crosby, Stills and Nash’s “Lady of the Island,” it shares that song’s quiet gentleness. Rapp, however, had larger philosophical ideas to explore.

Rapp’s lady is not so much on or from a physical island, but a metaphorical one, seemingly lost with the world going by around her. He’s trying to bridge the figurative ocean, to connect with her, to alleviate the pain she feels living in and being part of the world. Or is it his own pain he’s trying to subdue? That’s part of the uniqueness of the song — its ambiguity. Perhaps they’re both suffering; the tortured way he sings “pain” in the song’s final line leads us to believe it’s not just her pain he’s referring to. If they could just “touch each other’s smiles” everything might be alright.

As with much of Pearls Before Swine’s work, questions of religion and God figure in. In this track, is God their salvation? Rapp sings that God can be seen in anything — whatever is important to a particular person. As an example, a beggar sees God in a piece of bread. And a “girl in an army shirt with long hair and white smiles” has “visions of God” in the grass. Which could be a simple reference to seeing God in nature, but it also has a possible double meaning of grass = marijuana and the visions conjured.

But the song asks, is God enough? Is God truth? “If God were lies, I’d promise you beautiful lies you could live in.” Rapp seems to be saying that belief, and therefore suspending disbelief, could be enough to let her (and him) deal with the cruelties and ugliness in the world. He tries to offer her this salve, these promises — that even if belief may be a façade, it can offer comfort. It’s a sentiment at once cynical, yet strangely hopeful (and yes, a bit bleak).

“Wasn’t Starkly Bleak in one of those British Invasion groups?” Rapp added to that liner note comment.   words / r caldwell