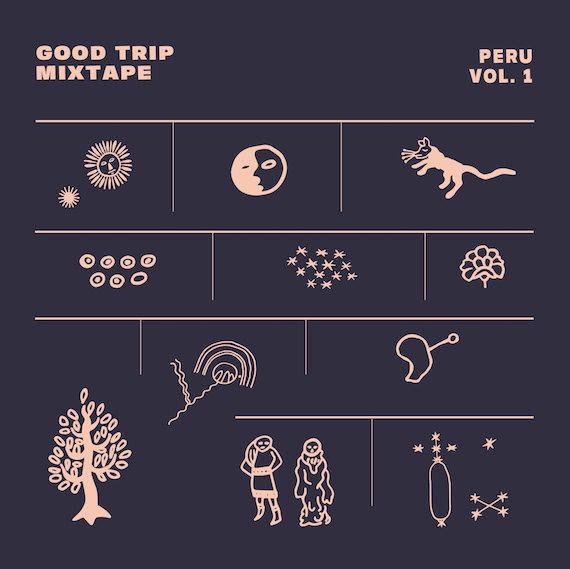 Welcome to our sixth collaboration with Portland, OR based record collector Sam Huff following his recent trip to Peru. The below is an exploration in sound migration over three-hundred years, tracking elements west from Europe and Africa through the Caribbean and jungles of Colombia, down the Atlantic coastline of South America until the terminus of our journey: Peru, the spiritual epicenter of South America.

Follow us through groves of tropical beats, waves of reverb-heavy guitars and the rise and descent of traditional Quechua harmonies…while we get our head right.   This is the first in a series of mixtapes dedicated to Mîºsica Peruana, spanning two essential decades between the 60s and 80s. — this is the Good Trip Peru, Vol. I.

Mîºsica Peruana. It’s a tropical, soul-stirring cocktail spiked with the spirit of the Andes.

The sound of Peru is a diverse confluence of traditions and ideas, with tributaries flowing through its varied landscape from parts near and far. Afro-rhythms carried across the Pacific during the slave trade era transformed sonic soundscapes throughout the Caribbean in the 17th and 18th centuries. During that same time, Spanish colonization introduced a range of instruments to the new world, diversifying the sounds of ancient song and dance that had been developing for thousands of years by the indigenous communities of the Northern Andes. And while foreign, aural flavors mixed with local beats and hymns, the heart of the music – no matter what country of origin – was the same as it always had been: all elements of this music are about movement and celebration.

It took almost a century for Cumbia to coalesce in Colombia, mixing string and brass instrumentation from the old world with African and Andean rhythm and harmonies until a new spicy cocktail was formed. But in took only two more decades for this this sonic wave to migrate south down the coastline to Peru, where its eventual arrival in Lima couldn’t have been timed more perfectly; American surf and psychedelic rock infected the local airwaves by the late 60s, and with these imported sounds also came the electrification of strings and keys. Fuzz boxes and keyboard synths popped up in local music shops. Things got heady, and the tones and rhythms led Cumbia down a freaky new path.

In the mid-50s, Lima was a much smaller metropolitan area by current standards, boasting a population that barely topped one million residents. But as the economic and political climate of rural communities in the Peruvian highlands started to shift, a mass migration quickly changed the urban landscape. Millions more flowed from the mountains above down to the arid dune-scape in and around Lima proper. By the late 70s, the population topped four million. Makeshift squatter villages sprouted in the sandy hillsides surrounding the city, infusing the region with a new mix of rural culture.   History loves to point out this ushered in a new era for Lima – one synonymous with grit, grime and whole lot more crime. But these same historians often overlook the fact that Lima also transformed into a much more culturally diverse (and certainly more interesting) city. In a capital that was founded by the Spanish, it’s no surprise that the vestiges of colonization permeated every aspect of local culture since its inception in the 16th century. But with this new wave of native migration to the coastline came a resurgence of indigenous culture and pride that greatly influenced the not only the sound of Lima, but also the taste, texture and aesthetic of this intoxicating city.

Cumbia had undergone a hundred-year long transformation (and modernization) leading up to the late 70s, but it didn’t capture the same spirit or cultural importance that traditional Quechua music did to these new city-dwellers. Huayno, a sound that was honed by the Inca and their descendants over centuries past, was the song and dance they moved to. These Andean immigrants were the ones filling the dance halls and calling the radio stations. These were the people blending the old with the new in a way that hadn’t been done before. And it didn’t take long for the people of the barrios surrounding Lima to alter the Cumbia recipe once more.

With a nod to the native hooch of choice, the genre dubbed Chicha was born. It’s namesake derived from the unaged booze produced from fermented maize, this new (old) term perfectly described a young class of musicians who began blending the high-low harmonies of Huayno with the modern, psychedelic sounds of Cumbia loitering in Lima after the 60s. It was party music for a new generation, and visual stylings of the groups changed to reflect the bright, new sound. While taking obvious queues from provincial folk festival bands they grew up dancing alongside (read: a lot of members and an exuberant), these new groups ditched the old garb (and some older instrumentation) in favor of something with a little more panache and modern flavor. Imagine the starting lineup of the Houston Astros, circa 1970 jamming on synthesizers, wood blocks and a few fuzzed-out guitars and some simple percussion banging around in the outfield. Flip through stacks of old records in the Quilca neighborhood of Lima, and you’ll see how the aesthetic of that era matched the attitude of the emerging Chicha scene. It ignited the city of Lima, then all of Peru.

Cassette Giveaway: We made a small batch of physical cassettes for this release. Want one? Thought so. To enter, leave a comment below with the title of your all-time favorite South American record cut between 1960 to the present.

Let’s get lost. Aquarium Drunkard has launched a Patreon page, which allows readers and listeners to directly support our online magazine as it expands its scope while receiving access to our secret stash, including bonus audio, exclusive podcasts, printed ephemera, and vinyl records. Your support will help keep an independent cultural resource alive and healthy in 2019 and beyond.