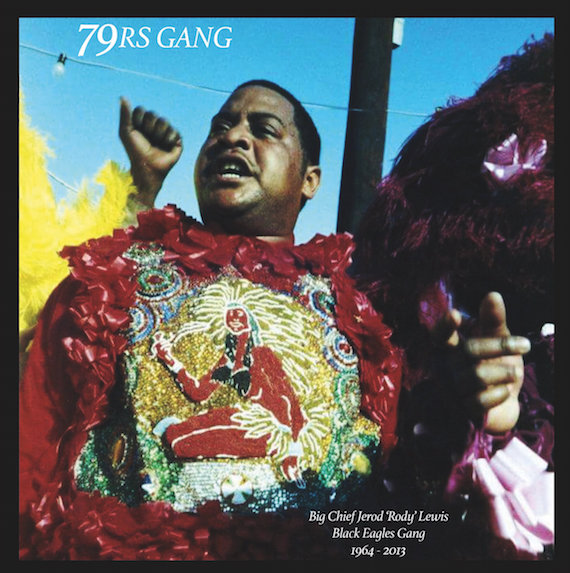 2015’s Fire on the Bayou was the debut album from 79rs Gang, the musical partnership between former rivals Big Chief Jermaine Bossier of the 7th Ward Creole Hunters and Big Chief Romeo Bougere of the 9th Ward Hunters. The Sinking City-released LP was an invigorating return to the early musical forms of the New Orleans Mardi Gras Indians, closer to the field recordings of Alan Lomax and Les Blank than the fully-formed 1970s releases from seminal groups like the Wild Tchoupitoulas or the Wild Magnolias. (Which is not to say those records are any less important. They are essential.) In the lead-up to our interview with Bossier last year, we compared it to the “humid exuberance” of Lightning and Thunder, the timeless LP that Big Chief Monk Boudreaux and the Golden Eagles recorded “live and in context” in the 80s at the H&R bar in the 2nd Ward.” In short; Fire on the Bayou was raw and transcendent.

“Dead and Gone / Wrong Part of Town” is the new single from Bossier, Bougere and the folks at Sinking City. As the title suggests, the A-side is a vivid tribute to the Mardi Gras Indians of days past. Bossier’s gritty baritone dances along a sparse, hair-raising groove, freely and passionately recalling the story of his Indian predecessors. Old-timers like Bougere’s own father, Big Chief Rudy, who he says paved the way for new groups like the 79rs Gang “to walk the streets and not get harassed…to wear these big, beautiful elaborate costumes and get recognized for who [they] are.” On the B-side, the beat continues, and the pair trade verses, alternately warning the listener to watch their step in the chiefs’ respective wards. That message isn’t always ceremonial. Towards the end of the song, Bougere pays respect to a young Indian peer lost in December of 2015 to gun violence. The 9th Ward Big Chief’s sweet alto carries a stark reminder; the New Orleans grit often comes at a cost. We should never take talent like his or Bossier’s for granted. words / j steele