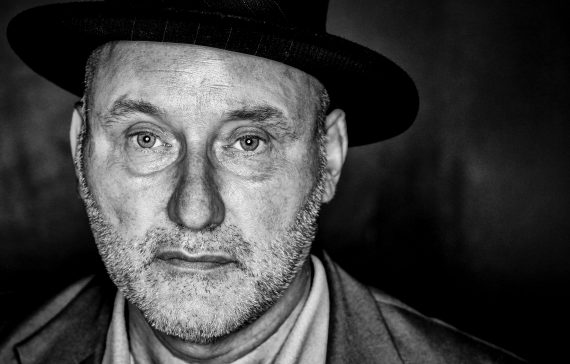 “Left to our own devices with this group, we’ll lean toward jazz, funk, Afrobeat,” bassist Jah Wobble says of his band, Invaders of the Heart.

Though best known for the noisy work he did on albums like First Issue and Metal Box with  Johnny Rotten’s post Sex Pistols band Public Image Ltd, Wobble (real name John Wardle — say it out loud) has been a restlessly creative player for nearly 40 years. A consummate collaborator, he’s worked with Brian Eno, Sinead O’Connor, U2’s The Edge, Holger Czukay and Jaki  Liebezeit of Can, and dozens more, seamlessly crisscrossing between experimental scenes and styles. Last year, he released Everything is No Thing with the Invaders, a loose constellation of players he’s led since 1990. On the album, contributions from legendary Afrobeat drummer Tony Allen sat alongside psychedelic touches by Nik Turner of Hawkwind. Simply put, Wobble knows how to throw a good sonic party.

On the Invaders’ new album, The Usual Suspects, Wobble offers a quick survey of his long career. Reinterpreting favorites from PiL albums, his solo work, and soundtrack compositions, he sketches out a broad overview of his deep catalog. Aquarium Drunkard caught up with Wobble around the release of Everything Is No Thing, and that conversation’s presented here, edited for clarity and condensed.

Aquarium Drunkard: There’s a pronounced Afrobeat influence on your work. How did you first hear that music?

Jah Wobble: There was a lot of African musicians in London [in the ’70s]…a lot of Nigerians and Kenyans, South Africans, would be in London. Because of the apartheid system at the time, a lot of these South African musicians, like Hugh Masekela, Dudu Pukwana…they settled in London, you know? So there were great African groups around and African-influenced bands. I think Fela Kuti was in London for a while at that time.

AD:  Did  that music’s influence on you pre-date the punk movement?

Jah Wobble: A lot of my musical influences were formed well before punk, with reggae, ska music, which I was listening to at eight or nine years of age, because it was the popular urban music of the time in the UK. I listened to a lot of that. I listened to a lot of soul music. When the Afro-rock thing started, you heard it more and more when you went to live shows…people like Ginger Baker of Cream helped promote Afro-rock, as well. That would spill over and [he] got people to listen to things like Fela Kuti, as well. Fela Kuti so political, it went with that ‘70s zeitgeist. I remember, you’d get people like him and [Yukio] Mishima, the Japanese guy, who was a writer/poet/actor, who was also a revolutionary, who was very true to a certain Shinto ethic. It was pretty fascinating…it was very far out and really kind of married well with a lot of the more radical elements of the hippie culture.

AD:  Did it feel like those cultural influences were fusing into the overall counter-culture sensibility?

Jah Wobble: It did. And by the late, ‘70s/early ‘80s, I began to hear jî¹jîº music. That’s more my thing, that’s what I prefer. [Artists like] King Sunny Ade, with [his] version of country pedal steel guitar. That’s the stuff that really worked for me.

AD:  Based on your song titles, it seems like you’re in a very heady, spiritual, and psychedelic space these days. Are you meditating?

Jah Wobble: Oh yeah. I meditate. I’m a Buddhist, for what it’s worth…and I’m painting now these days. [Producer Youth] saw one of my paintings and said, “That’s what the cover [for Everything Is Nothing] should be. That’s exactly perfect.” I’m doing these crazy, geometrical sorts of shapes. But yeah, I’m that man, every day, thinking of the nature of the mind. Is there any substance? It’s definitely there, but is there any substance, [is there] really any permanent essence in the world? Is it a question of me with my consciousness?

[Do I]  I perceive the world as a separate entity? I don’t think so. It’s this kind of crazy dualistic way we’re all conditioned to see the world. These are all things I ponder very much so in life. But you have to be earthy with it. I’m not too much into that Californian new age thing. You have to keep your feet on the deck. That’s one of the reasons I like Buddhism. It’s very earthy, actually. It’s not the wishy-washy thing people might think it is.

AD: You mentioned a lot of your musical foundation was cemented pre-punk rock. But after the Sex Pistols broke up, you founded Public Image Ltd with John Lydon. Like you, he also had a pre-punk love of reggae and dub. Did you two discuss that as part of what you wanted to do as a band?

Jah Wobble: Me and John never really got into big conversations, you know? A lot of John’s music was formed…he [was] quite lazy actually, he was. A lot of his musical taste was formed by a guy called John Gray, who was a dear friend of his. He was a musical nutcase, big music freak. He lived for music. He was the big Pete Hammill fan, the big Can fan, and he influenced John, lightening his thinking a lot of the time. But I think [Lydon] would get uncomfortable if you talked too much about how music should be. I had very clear ideas. They were very simple and they still are.

I only started painting recently and I did some things with oils, very impressionistic things like that. And I liked the process. I’ve secretly wanted to be a painter for a few years now, just to have the joy of making things on canvas, putting stuff down. Very quickly, I wanted to make these geometric shapes, a bit symmetrical, a bit asymmetrical, at the same time. They’re not perfect, but they kind of draw you in. There’s a hypnotic element to them. 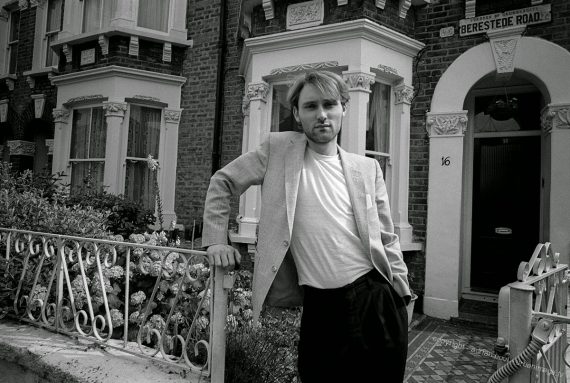 That’s what I did with the music. I knew bass should be strong, and be modal, in block units. It was about hypnotic patterns less than the chordal thing. The aspect I had was this rhythmic pattern going on. And it still is. Now I will write some chords and put a bass line to it, but then it was about these block units. I was very fortunate coming up in Public Image were I’m a rookie player, the baby of the group. I was very young. But I was able to play bass and do what I wanted to do and the bass nearly always started the songs. I was able to just sort of play and do my thing on top of it. I had this opportunity and it meant I could form this style, this approach, this way of playing.

I’ve stayed quite true to that. I always come back down to that building block style…a lot of that was influenced by reggae when I saw Bob Marley in ’75 with Family Man on bass. He’s the bass player a lot of people check for. [He had] fantastic phrasing, a great musicality to his playing. The power of the bass…one man standing there tapped into the power of the universe. That was my kind of thinking with bass.

AD: You wanted it to sound elemental.

Jah Wobble: Visceral. When we went on to do Metal Box….they say music follows on from art thirty years later. So you get impressionist painters, and then thirty years after that, you get impressionist composers. I think that’s probably about right. I think the whole spirit around PiL in those early days was similar to the American abstract expressionist painters, really. We wanted to go beyond form and do something direct from our minds, hearts, and go far out. I think post-punk was a long way from punk in a way. Punk had opened the door up to do stuff, but my aesthetic was closer to the abstract expressionists.

AD: You played with a lot of people associated with krautrock. You mentioned Can earlier. You played with Holger Czukay and Jaki Liebezeit. You worked with Brian Eno, who’s a very vocal admirer of that kind of music. You were able to tap into some of those parallels? The krautrock stuff seemed to have profoundly influenced post-punk. Did you get the sense that those two viewed a connecting thread between the experimental rock music they were making and the stuff you were making?

Jah Wobble: Absolutely. When I went over [to Germany] Holger, especially, was fascinated with Public Image. He really got that. Typically, over in Germany, they listen with very fresh ears. He really got the totality of it…it wasn’t a thousand miles away from  Stockhausen, who of course Holger studied with. There were those connections there.

The Germans are incredible reductionists. They really get to the essence of things, you know? I remember Holger talking about football or soccer. He’s not a football fan, but he said “I’ve thought quite a lot about why people like football. And you know what it is? No one knows where the ball will go next.” They’re great at getting to the essence of things. words / j woodbury