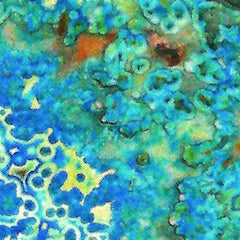 If avoiding the spotlight were an artform, Baltimore’s Elijah Forrest, who performs as Terrors, is expert in its craft. His recordings are spread throughout limited edition split cassette tape releases, usually with strange phonetic titles difficult to define or comprehend. And in terms of priorities, his heart seems more invested in his other project, Lolly Gesserit (he even recommends this project in the Ensorcell Qori liner notes). But while Gesserit is more a dissonant, droning kind of thing, Terrors could be described more simply as ethereal, not unlike the lo-fi tape hiss of Dirty Beaches layered with the ambiance of Grouper. And where Terrors first album, Lagan Qord, is a fine effort itself, Ensorcell Qori is a more focused affair heavier on fully formed songs than meandering instrumentals.

“All this living must be leading somewhere”, Forrest repeats in two different instances. Let’s hope it leads to more Terrors music in the future. words / zb