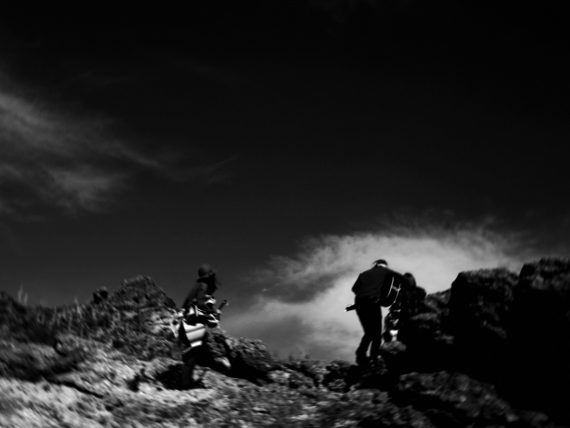 There’s been no shortage of national focus on Arizona of late. The president showed up, there was trouble; our disgraced former sheriff slithered back into the headlines; and a federal judge ruled racism as the main factor in a ban on ethnic studies in Arizona schools. From the outside, Arizona likely seems like a land of extremes, of extreme ideologies and extreme heat.  And it is that, but for those of us listening with our ear to the ground, those extremes extend to  artistic  vitality and spiritual growth. From the dusty cowgirl songs of Billie Maxwell to the blistered soul of Eddie & Ernie, from the exoticism of the Sun City Girls to the fried psychedelia the Meat Puppets, from the proto-freak folk of Black Sun Ensemble to the cosmic crush of Destruction Unit, Arizona has always harbored strange musical aberrations.

The Old Arizona was weird, but so is the new. Two stalwart examples of this New Weird Arizona? Tucson combo the Myrrors and the Phoenix-based Sunn Trio. Recently, the bands released new LPs, titled Hasta La Victoria and Sunn Trio, respectively.

Their connections are more than geographical; Sunn Trio arrives via Sky Lantern Records, the label run by Nik Rayne of the Myrrors, which has released music by like-minded explorers Eternal Tapestry, Dead Sea Apes, and Kikagaku Moyo. And even though Hasta La Victoria, released by the psych-leaning Beyond Is Beyond Is Beyond label, finds the Myrrors playing an entirely discrete combination of Krautrock, ambient, and drone than Sunn Trio’s Middle Eastern/free jazz/bizzaro excursions, it’s clear a psychic connection ties the groups together, a unity that exists despite  vastly different sonic frameworks.

Led by “Smokey” Joel Robinson, Sunn Trio isn’t usually an actual trio. Its lineup fluctuates, but there’s consistently more than three players involved, as well as a constistent focus on massive, swelling drones. Echoes of Sonny Shamrock,  John McLaughlin, and Sir Richard Bishop can be heard in Robinson’s fiery blurs of guitar, his approach rooted in the sideways logic of Captain Beefheart and electric period Miles Davis. Underneath his fluctuation modalities, the band vamps on Saharan motifs and funk-punk rhythms. On epic compositions like “Prepared Hieroglyphics” and “Beneath the Sheltering Sun,” the band conjures up the massive walls of dust that blow in during the Arizona monsoons. “If this is desert music, it’s global desert music,” reads the band’s biography, “the sound of sandstorms blown from the Sonoran to the Sahara and back again.”

The Myrrors began nearly a decade ago, initially playing a style of fuzzy psych-rock. But while a certain heaviness remains — especially evident in the band’s rhythm section — the overall approach on Hasta La Victoria is hard to categorize. It’s as spiritual as it is conceptual, blending the avant-garde approaches of La Monte Young and Terry Riley, gamelan textures, and the cosmic space music of Popol Vuh and Trî¤d, Grî¤s & Stenar. Forgoing electric guitars almost entirely in favor of bouzouki, transistor radios, flute, tape loops, harmonium, viola, and electric piano, the Myrrors exist in the spaces between, like art carved from raw earth. Like the best contemplative and psychedelic music, patient listening reveals more over time.

Paired together, the records help illustrate the diversity and wideness of Arizona, and to a greater extent, the openness of the desert itself. The records allow the listener to project themselves into these polyrhythmic, globally-minded compositions. The barrier between listener and recording flickers and eventually disappears entirely. words/j woodbury

One thought on “New Weird Arizona :: The Myrrors and Sunn Trio”