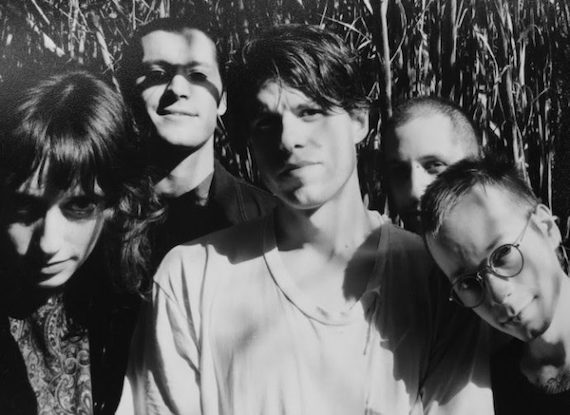 Following the quick succession of a trio of albums beginning in 2014 (along with the 2016 release of Cory Hanson’s solo endeavor, The Unborn Capitalist From Limbo) the LA based Wand return with album four — Plum. At 10 tracks it’s the groups most nuanced work to to date, both aesthetically and atmospherically. As such, we were curious as to what was brewing behind the scenes while cutting the album in the Sierra Nevada foothills of Grass Valley, CA. As it turns out, a lot. Below, members Evan Burrows, Cory Hanson, Robert Cody, Sofia Arreguin and Lee Landey take us on a tour; one involving Sonic Youth and Joan Didion to Yerba Mate, tuna fish sandwiches and beyond.

Sonic Youth / Sister: This record was indispensable for me during the time we were working on  Plum–  as  an accomplice, a refuge in my grief and confusion, a sterling object lesson in musical space and surface.  Plenty’s been said about it, so why not say more? It’s like a pulsing heart, shimmed at every junction with slides of freezing glass, liters of blue blood leaking everywhere. Or it’s like a waning half moon, tilted just so, spilling silver all over all the many-colored things. Somehow, this record seems to seek in sympathy with the struggle of youth for reality. I think we have always wanted our own records to feel like a sympathetic seeking along these lines.  Sister  howls in celebration at how splendid, mad circuitries of dystopian fantasy sprawl out from pre-verbal grief. It allows asymmetry, and wonders at how feedback sings and swells like a brain in an otherwise empty skull. “Angels are dreaming of you.” – EB

Grateful Dead / Workingman’s Dead: I listened to Workingman’s Dead a lot while we were writing Plum. I’d put it on every morning, make breakfast, futz around my house, clean dishes, put things away in cabinets, sweep the floor.   It’s complementary in tone and color to an array of home-oriented tasks.   There is a tint of melancholy and nostalgia to Workingman’s. I found it calming, like walking down the street the morning after a night of heavy rain, grabbing onto the warmth in your jacket. The characters on Workingman’s Dead suffer hardships, come face to face with powerful realizations, slide in and out of consciousness in fever soaked dream-states, work until their bodies fall into pieces, and play life or death card games with a blood-thirsty “Dire Wolf”. They come from a tender crack in time – an early weird America that never was. One that rejects the narrative of accelerated industry in the West for a gentler future, a humble prosperity. Workingman’s is a world of poetic decline.   The characters are bound by their love of labor, even if their bodies decompose before they finish their work. They’re not prideful of their property, belongings, or money because there simply isn’t enough money in Workingman’s Dead to be proud of. They brag about how hard they can work, and how much wine they can drink, and that’s the ego extend for which they find pride in their daily lives. They sing about having a good time, and enjoying what you have even if it will be gone tomorrow. They do not mourn the dead, for they are the Dead themselves. And for the matter, the Workingman’s Dead!   “See how everything, lead up to this day.   And it’s just like any other day that’s ever been”. Makes me cry every time! – CH

John Cale and Terry Riley / Church of Anthrax: I wrote my parts while simultaneously learning my instruments. At times it was overwhelming. This album is unpretentious and hypnotic and a really great illustration of improvisational ideas. I think I will probably always consider this album as a model to look up to. – SA 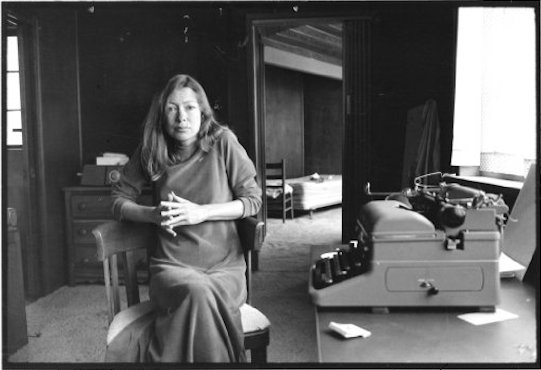 Joan Didion / Slouching Towards Bethlehem: I don’t have any new insights on this as a piece of writing, but it’s something I read while we recorded Plum in Grass Valley. What I read while we work, in the studio or on the road, always takes on a particular character for me that is inseparable from the action around it, as the language fills up all the quiet spaces between the doing. Like most of her collections, Bethlehem is about California, popular figures, paranoia, and dreams gone a bit awry. She writes about the reality of San Francisco in the 1960s from the perspective of someone a couple years past the age of susceptibility to its romanticism, military men in Hawaii, Joan Baez as an early depiction of contemporary celebrity, and very particularly about self-respect, and the agoraphobia that accompanies the fear of giving yourself to every stranger. Joan cuts to the heart of everything and was a wonderful compass point to follow while we tried to navigate the tangle of songs we had arrived with. – LL

Jonathan Blow / The Witness: The Witness is a game I spent a lot of time with while we wrote the songs for this record. As I’ve gotten older it’s become more difficult for these kinds of things to hold my attention, but this one was wormy, and inconclusive, and it kept a place in my thoughts. It is very quiet, and its colors are very loud. Fundamentally it’s a mystery, it requires time and attention, but its reward is always the next question; not in the narrative, as there is no narrative beyond educating yourself, but in the next task. It uses no language, and communicates large ideas silently. It’s patient, thoughtful, removed, frustrating, loved and loving, and it relates its heart in a way that I hope the things I make as an individual and as part of a family can also realize. – LL

Tuna Sandwiches: My god we have all eaten a lot of these. Except Sofia — in this respect, though not only in this respect, she’s a moral compass in my life. But the rest of us ate a lot of tuna sandwiches while making this record. When I think on a tuna sandwich, I find it easy to transpose the wayward thoughts onto a record like  Plum,  and there’s some slippage between the two. Pungent, nourishing, infused with industrial poisons, caught in the wild, shredded and pressed into a salable disc. It’s a total ethical and environmental question mark, and it gave some of us the energy and the sense of punctuation we needed to make it through the days at stake on our new record. – EB

Guayaki Organic Brand Yerba Mate: My herbal ally, my 16 ounce buddy, enlighten mint in a can. I drank about 20 of these while we recorded Plum. – RC

My Two Jimi Hendrix Posters: One of the benefits of living with your significant other is if they’re COOL they might have a Hendrix poster you can hang on a wall adjacent to the Hendrix poster you’ve already got. My girlfriend and I moved in together shortly before I joined Wand and as a result we have two Jimi Hendrix posters hanging in our living room. Mine is a black and white shot of Jimi in action while hers is a full color shot of Jimi in action and about double the size. We agreed mine looks best over the mantle while hers, a handsome 20 feet away, is above our bookshelf. In the months Wand spent writing Plum, I would come home after a long day of jamming, throw on a record or turn on the idiot box and sit and admire my two Jimis. – RC

Dogs: Charles and Lupe are the dogs most present in my life. They are both strays taken in from the streets of north east la, brown and short and have great enthusiasm for life. I’d like to think they are advanced listeners or at least have some abstract appreciation for music. Having Charles present while we recorded definitely helped keep my mood up. Sometimes if an activity is too human-centric- it’s hard for me to feel good about it. She is very social and can be super engaged with humans on a higher level than a lot of animals I’ve met. – SA

Nintendo / Mario Kart 64: We recorded at Tim Green’s studio “Louder” in Grass Valley, California. It’s basically at his cabin in the woods, and he built a barn house studio with all this wonderful gear that you record in during the day, then spend the night on the first floor of the cabin. He had an N64 with Mario Kart so we played that every night to unwind. Usually while making a late dinner, or having a few beers – smoking some pot to decompress from harder recording days. Mario Kart is an excellent way to absolve tensions either between people, or with your own psyche (“I’m such an idiot, I suck, Can’t play music, etc”) which we, just as all people doing intense things together, will suffer from. If you watch a group of people play Mario Kart, you’ll probably think they all hate each-other. “Fuck you, dickhole.” or “why the fuck did you do that you piece of shit?”- common utterances. But it’s all out of the fun of bringing these simple animated characters to life to race each other. I will give Mario Kart 64 half a peace sign for being a game that has no serious depictions of violence or death. The only physical harm is so far removed from reality it would be impossible to re-create (imagine physically throwing a turtle shell at someone to hurt them). We tried playing Goldeneye a few nights and I couldn’t stand it. Why would you play a game where the object was to shoot your friends until they died? So horrible. No thank you! – CH