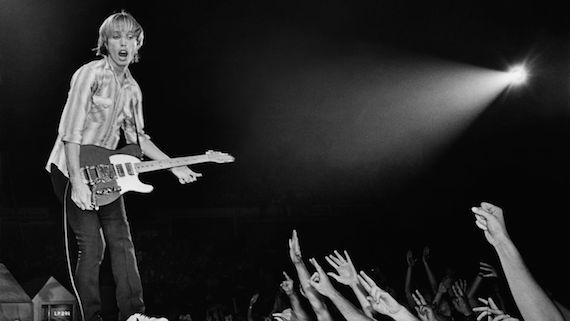 Putting on a Tom Petty record at wall shaking volume is one of life’s finest, simple pleasures. Tom Petty’s entire career is a wax wonder, and one thing that has been evident since his incredibly sad passing is that he was also a great uniter — seemingly, everybody was moved by his music.

The man was the embodiment of rock ’n’ roll; he was a second generation fan who soaked up Elvis but then pledged his allegiance to the British invasion. No mere copycat, when he stepped up to cover a song from one of his heroes, the love and passion for the music deep within him was 100% palpable.

Fortunately, a mobile truck had the tapes running in Boston, July 1978, and caught this performance of the Animals classic “Don’t Bring Me Down“. Written by the American team Gerry Goffin/Carole King, this performance takes the British interpretation and and brings it back to the USA as Tom and his untouchably tight Heartbreakers claim it as their own. However, this was initially only released in the UK as the flip side of “Here Comes My Girl”, in both 7” and 12” format. The wide groove, 45 RPM 12” single is a devastating piece of vinyl. Stan Lynch’s bass drum sounds as though it’s gonna break a window, Mike Campbell’s fuzz and tremolo guitar is in your face, Ron Blair’s bass thunders away, Belmont Tench’s organ channels the 60’, and Tom’s vocal is felt with pure velocity. words / d see