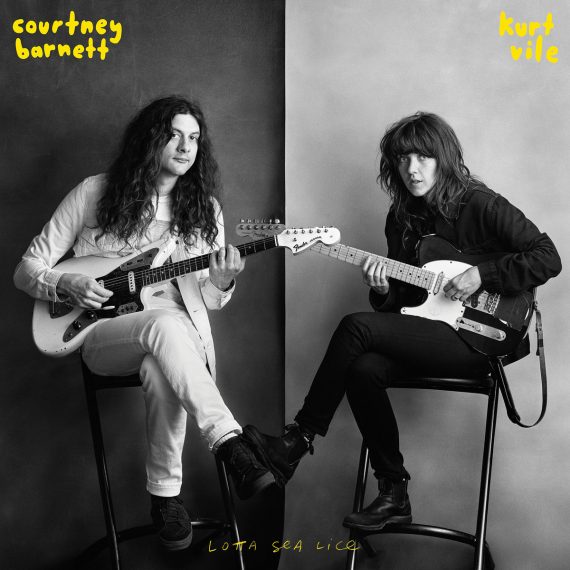 On Lotta Sea Lice, their debut album of duets, Courtney Barnett and Kurt Vile sound relaxed and unfussy. This is no overthought (or overwrought) “supergroup” type outing; it’s simply two pals, comfortable in their friendship and respective sonic identities, getting together to kick out some tunes, mutually. It wasn’t even intended to be an album, not at first at least. “I think our plan was loosely to record two songs,” Barnett says of the  record, out this week via Matador Records. “There was never any discussion of a finished product, maybe a 7” if it was any good.”   But things started happening: songs started coming together, covers worked out, and members of the duo’s individual backing bands began chipping in along with friends like  Stella Mozgawa of Warpaint and Mick Turner and Jim White of the Dirty Three.

Soon enough, Barnett and Vile had more than a single. They had a record. But don’t misread, it’s no slapdash effort. Lotta Sea Lice finds both in top-form as guitarists and songwriters, their harmonies ambling and uncannily sibling-like. The highlights are plentiful. Trading verses on album opener “Over Everything,” the two waver between sullen silence and uproar; on “Blue Cheese,” they shout out Game Genie and Tom Scharpling, host of the indispensable Best Show program;   singing Vile’s “Peepin’ Tom,” Barnett finds extra sweetness  and melancholy in his words: “I don’t wanna change/but I don’t wanna stay the same.” Add in a few rockers, some rootsy numbers, and great covers of songs by Belly and Jen Cloher, and you’ve got one of the warmest records of 2017, filled with the kind of songs that make you almost forget about the “big old ominous cloud” on your periphery, if only for a couple blissed-out minutes. Catch the duo on tour (with Sleater-Kinney‘s Janet Weiss manning the skins) and cross your fingers for more CB + KV in the future. words/j woodbury