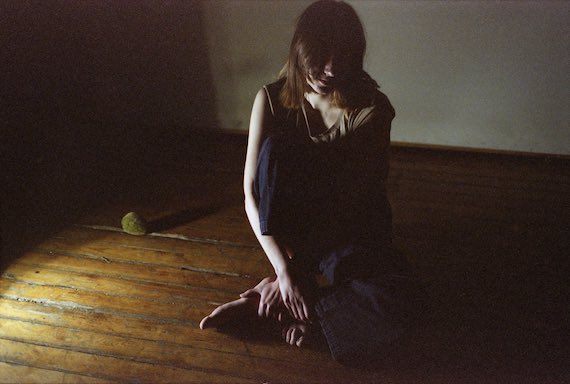 Reaching for Indigo, the fifth lp by Haley Fohr’s Circuit des Yeux, begins with a cataclysmic break, a complete shift from one state of being into another. “Brainshift, came like a tidal wave,” Fohr sings, her deep, rich voice hovering over a muted organ. The imagery is overpowering, like a submersion in deep water. Inspired by a profound moment of recognition, the album represents a giant step forward for the Chicago singer and composer.

Fohr’s distinct voice has brought an exquisite flavor to a number of records this year — including Mind of Mirrors’ Undying Color and Six Organs of Admittance’s Burning The Threshhold — but Reaching for Indigo is most indicative of the fullness of her vision. Recorded with Cooper Crain of Bitchin’ Bajas, the album trades in spectral folk, overlapping minimalism, and haunted psychedelia. Masterfully, Fohr uses each sonic element, from synth drones to layered acoustic guitars, to accentuate the emotional timbre of her singular voice.

“I really use chaos and chance a lot in my composition,” Fohr explains over the phone. “I’m learning to be more communicative with my work. It definitely needs to convey what I’m feeling; the feeling has to translate, it’s the thing I’m most concerned about.”

Here, Fohr explains where the album came from, detailing how the writing of neurologist Oliver Sacks and socioeconomics influenced her approach. The conversation has been edited and condensed for clarity.

Aquarium Drunkard:  The title Reaching for Indigo references a specific moment in your life. Do you care to talk about that experience?

Haley Fohr: It was kind of a spiritual awakening, for lack of a better term. I mean, I’m not religious or anything [but] music has led the way this last decade in my life. There have been a lot of challenges and obstacles. A lot of times they manifest in a dark way and it becomes this do-or-die situation. But what happened to me on January 22nd, 2016 came from within me. It was a moment of clarity. I wasn’t necessarily unhappy, but I have to wonder — ’cause I’d been touring constantly for the last four or five years — if I was subconsciously searching for something. I was with a close friend, convulsing, and something clicked in me. I knew what I had to do. I pretty much isolated myself for a couple of months and wrote the songs that you hear on this record. I sat with myself and gave myself some space and things really started to coalesce in this really bizarre way.

AD: What triggered this event?

Haley Fohr: That’s the thing. It just came out of nowhere. It really felt like it came from intuition. It wasn’t brought on by an outside force; it was just within me. It was really late at night and I just started crying. I felt like I needed to do something. I was so afraid. At the time, I was dating a guy. I broke up with him. I was living with all these musicians and I just flew the coop.

AD: How did the people around you react?

Haley Fohr: I don’t know that anyone understood the logic behind it besides myself [but] I listened to myself and I was deeply rewarded. As an artist, when something really personal happens to you, you want to celebrate it and try to translate it in a universal way. A few months prior to working on these songs, Oliver Sacks had passed away. Towards the end of his life, he was sharing personal antidotes. One of them was about the color indigo and how it’s scientifically undefined. Each color has a frequency, just as every music note has a frequency, but people have never come to terms on a unified frequency for indigo. The story that Oliver tells is one of taking a bunch of psychedelics and this cocktail of pills. [He envisioned indigo]…and said it was the most beautiful color he’d ever seen. Then it was gone and he never saw it again. I thought it was such a beautiful story about humanity and these undefined abstract things we find for worship throughout our culture. This moment, beyond definition, came to him and lived within him and then it was gone. For me, it was a really positive notion. Why else would you trudge through these day-to-day obstacles or existential crises? I mean that’s the point: reaching for something you’ll never reach.

AD: My favorite lyric on the album is in “Brainshift.” You sing, “I can only promise to take up space.” Later, you refer to yourself as a container full of space. These lines draw a contrast between inner and outer life. Was that something you were considering while making this record?

Haley Fohr: I think that perspective is one that, for better or worse, haunts me. A lot of times I grapple with feeling like being outside of reality or creating my own world to live within. Transition and getting from one phase of my life to another in a healthy way, for me, includes a lot of introspection. There’s this phrase that I use where I say I’m just “spanning time.” Sometimes that’s the best thing to do as a person on Earth. There’s all this activity that you’re pressured to do throughout life. Sometimes inactivity can breed something even deeper.

AD: Your voice constantly surprises  me as a listener. Even when I think I have a handle on what I think you’re doing with it, you do something else that completely changes how I hear you. Do you sometimes surprise yourself?

Haley Fohr: That’s definitely a goal, the idea of being a pioneer. These last few years, I’ve been doing a lot of vocal exercising, trying to break out of the box. Finding things that are musical to my ears but exploratory. I’m really into stretching my voice. The sad thing is once you know your instrument, it’s harder to stretch sometimes. [But] that was something I wanted to do with this record: rely on my voice again but in new ways. It’s one of my number one goals as an artist, to try to be one of the most distinctive voices of our time. Which doesn’t mean I want to be an “icon” or that my music is for everyone, just that it’s distinct and always pushing into something new.

AD: You created an alter ego, Jackie Lynn  and released an album under her name last year. Did creating a new persona give you space or freedom to explore some of what we’re talking about here, to do something completely off of the path that you’ve been on with your main project?

Haley Fohr: Yeah, absolutely. It really freed me in a lot of ways. It made me more confident. What I do with Circuit des Yeux is so personal. It can get really heavy. It was nice to make a record in three days that was not tied to my heart in the same way. It gave me confidence in that I can simulate something in my brain and execute it in a really productive way. It doesn’t have to come from this very deep-seeded, heavy place in my heart. I’ve been trying to keep the avenues separate, but it’s been extremely difficult.

AD: How much are you and Jackie Lynn alike in your head? Does she ever feel like an exaggeration of your own story?

Haley Fohr: Jackie Lynn and I have a lot of shared experiences. But her style and attitude in life is much different than mine.

AD: You’ve worked as an audio archivist and restorationist for Numero Group, Indiana University’s Music Library, and on Palo Flats’ Mariah reissue. A lot of your work has involved working with private press records, which you’re drawn to. You recorded Reaching For Indigo with Cooper Crain of Bitchin Bajas at his house. It was assembled, in many ways, like a private press record. But because of the way technology has progressed, you can build an expansive sounding record like this in the same conditions some loner might have made their record in the ’70s. What draws you to work that way?

Haley Foh: It’s certainly intentional. I think I make records in really weird ways. I’ve got to the point in my career where — at least with Circuit des Yeux — I just couldn’t take money from a label. I’ve never had the budget but I’ve been obsessed with really expensive sounds. My socioeconomic status has been one of my biggest obstacles, but out of that has come so much imagination and creativity. Now, that’s just how I work.

AD: What do you mean obsessed with expensive sounds?

Haley Fohr: I go both ways. It’s a dichotomy. I love private press, tiny-sounding records, but also the bygone production  value of the late ’60s and ’70s. I didn’t hear a single Scott Walker record until I was compared to him ten times. Finally, I was like, “Who is this person?” and listened. And his records sound so expensive. There’s a symphony behind him. My approach is, “How do you do get that feeling with zero dollars and one friend who plays viola?”

AD: In closing, I want to come back to your voice. It’s wonderfully complicated. Have you always felt comfortable with it? In the process of becoming a singer, at what point did you recognize, “Oh, what I have here is unusual and special”?

Haley Fohr: I remember being in first grade trying out for the choir. You had to sing “The Star-Spangled Banner” onto a cassette. It was just me and the instructor. I kept having to go to a lower register. It was kind of embarrassing that I had to go to a boy’s part and even lower. But when I hit the right place, it felt so good. It’s really unexplainable because your voice is a part of your body. From that moment on, I’ve been pretty introspective. Sometimes I get so overwhelmed by emotion, the only thing that feels like true expression is singing. It’s always been that way. Learning to work within that has been really rewarding and challenging, but it has always been my natural language. I feel like music is my first language and English is my second. words / j woodbury / photo Julia Dratel

One thought on “Circuit des Yeux :: The Aquarium Drunkard Interview”