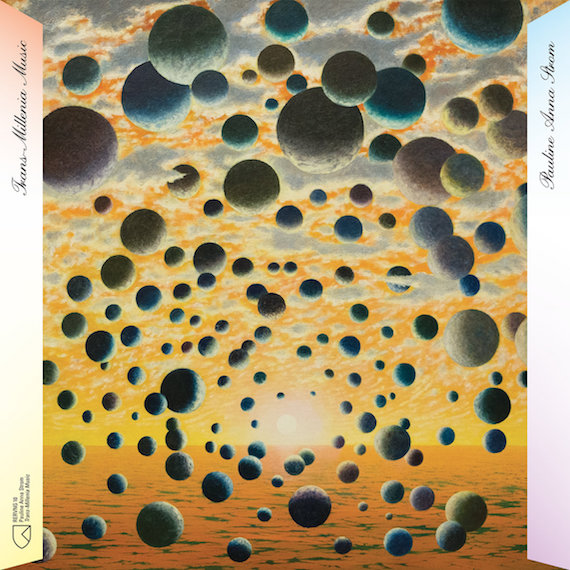 There is an ever-slight hint of a Southern accent in Pauline Anna Strom’s voice, a remnant of the place she left behind forty or so years ago when she moved to the Bay Area with her serviceman husband, who was stationed nearby. This faint trace of history, barely evident, feels like the fraying threads holding her to something like a recognizable time and place. If her music is to be believed, “Strom’s world is circular, at once purely physical and purely spiritual. The largely ambient work she created and released in the early 1980s under the Trans-Millenia Consort label resemble known sound only in the way that the sparkles of light that appear when you jam your fingers into your closed eyes resemble vision. To call her music spectral or wandering is to do it the disservice of naming it; as suggested by Trans-Millennia Music, a recent issue of selections from throughout her early 80s run, there is little that connects her work to the world around us, musical or otherwise. And yet it still feels warm and humane, the byproduct of an inner generosity. It’s welcoming, even if it’s unfamiliar.

Strom still lives in the familiar: the Bay Area, where she works as a healer and spiritual counselor. In the years since her initial run, she’s quietly influenced a number of electronic artists, including MGMT, who put “Morning Splendour” on their Late Night Tales tape in 2011. Some of the sonic territory she pioneered appears among the benevolent worlds of Kaitlyn Aurelia Smith’s music, and she shares a certain settled joy with Laraaji, but these are all distant planets in the same solar system. So we called Strom up around the release of Trans-Millenia Music and asked her to give us a tour.

Aquarium Drunkard: What did you listen to growing up? What were you into before ambient music?

Pauline Anna Strom: Classical, mostly. Mostly classical, and a little bit of rock, like kids do. And then I just gravitated naturally to electronic.

AD:   Do you remember what the hinge point was, how you got from one to the other?

Pauline Anna Strom: Probably when I came to California, but I was always exploring and buying different albums of different things – I can’t remember what from way back then, but anything unusual, you know.

AD: You moved to California in the late ’70s and were married to a serviceman. Your music doesn’t strike me as being something that a military wife would typically make.

Pauline Anna Strom: I’ve probably never been the typical (laughs). I guess I was born in the wrong time or the wrong planet or whatever, but I’ve been – not deliberately – different for all of my life, ever since I was a kid. I never did the same things or thought like other people did. I don’t know; I was just like that.

AD: Were you conscious of that, being different?

Pauline Anna Strom: In a way. Even now, I have a friend who’s a security guy, he says, “I have never known a woman like you.” He says, “You think differently from most women.” And I do! I’m a straight woman, but I’m more into a lot of things (I’m into a lot of femininity of course) that guys are into, and I’d rather hang out with guys than hang out with women. I’m just different like that. As far as the music, let me put it this way: I believe in being an individual, and in being your own highest authority. And that covers everything in your life.

AD: There’s not a lot of stuff that sounds like what you’ve made.

AD: There are the touchstones that people point to, like Brian Eno, but everybody’s influenced by Brian Eno; it’s just part of the culture. So it’s interesting to me that you position yourself as your own highest authority, because your music seems to agree.

Pauline Anna Strom: Yes, it is true that Eno influenced me some, but at the same time, I just have to give everyone a reference point or something! The music is so different from project to project, and I would be bored to tears if I had to follow a certain pattern that would be recognizable all the time. And now I want to get back to music again. Everything I’ve ever learned, whether it’s the healing and spiritual counseling that I do, I tend to appreciate what I pick up and learn, but at the same time, I take what I want from something and create my own way. You find most people are afraid to do that.

AD: I’m curious as to what your goals were when you started making music. Were you interested in exploring soundscapes and to see what’s possible within the instruments that you had, or were you trying to inspire something different, to bring yourself or your listeners somewhere?

Pauline Anna Strom: I think it’s a combination of all of that.

AD: Where do you think you were trying to bring people?

Pauline Anna Strom: To bring them to accepting everything that’s – how can I put this? – to bring them to exploring differences in things. You see how my projects are all different. It’s bringing them to a point of, “This is what she does, it’s unpredictable,” and accepting that difference in everything, that freedom.

AD: When you were making this music, were you concerned about an audience or making it for yourself?

Pauline Anna Strom: I was making it and whatever has happened for me as far as getting it out there has happened by accident, because I am not a business person. I just want to create. If something falls in my lap, good. I have no real desire to be – of course I want to make a living, but aside from that, if something falls in my lap, and then somebody else, if that’s their expertise to market it, to hustle it, I just want to create and be left alone. I’ll do it and hand it to you, just cut me a check. (laughs) I don’t care to get involved in all the politics of it and all that.

AD: You’ve said in the past that time was an important concept to you as an artist. How do you see time relating to your work? Would you like your music to be understood as linear when it unfolds or as a kind of exploration of space?

Pauline Anna Strom: As an exploration of the space of an imagination. Anything you can imagine, anything you can visualize – encompass that into sound.

AD: You’re a reiki healer, too.  How do you see music relating to your healing practice?

Pauline Anna Strom: Sound frequencies and the vibration of them affect our mind, soul, and body. As far as the healing and reiki, any healing system – whether reiki or not – it comes right down to they’re all the same in reality. I don’t know if you believe in God, but I mingle everything, even parts of my Catholic upbringing. I’m not totally against my church. I’m not a dedicated Catholic either, but I take bits and pieces of everything, and I create my own system. Of course, I’m probably a heretic to everyone I’ve ever crossed (laughs). But I don’t care. I believe there are only two forces in the world: love and fear. And man, woman, whatever we are, has to create an image or a system, its ego. Strip all that away and it comes down to just these forces, that’s all, but most people have to have a reference to relate to, whether it’s a god or quantum mechanics or whatever.

AD: Do you think that fear is love’s opposite?

Pauline Anna Strom: Yes. The only thing that can destroy you is you. When it comes to healing, all of these healing modalities work, but I do like – just like with music – I like to mingle bits and pieces of everything and create. I’m not pure reiki. I’m not pure this or that. I believe I’ll always be learning in every discipline for all of my life, and you just grow and you change and you evolve all of these things. You’re loyal to yourself, when it comes down to it. You help other people, but you’re loyal to what you are inside.   words / m garner

One thought on “Pauline Anna Strom :: The Aquarium Drunkard Interview”