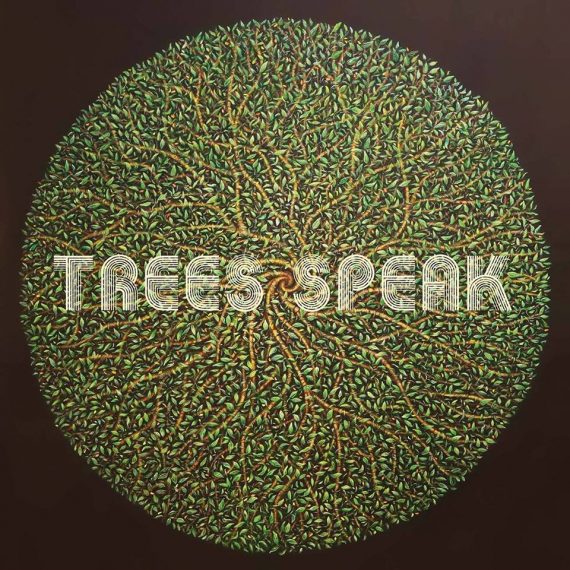 On its recent self-titled lp, Tucson-based psychedelic collective Trees Speak terraform long stretches of the 1-10 that carves through the Sonoran Desert into a cosmic autobahn. Led by visual artist Daniel Martin Diaz — whose work has been featured in Low Rider Magazine and Juxtapoz and comprises a large-scale installation at Sky Harbor Airport — Trees Speak incorporates work from players known for their work in groups like Giant Sand, Calexico, Black Sun Ensemble, and the Myrrors. Together, they build unfolding sound collage sagas that drift between foreboding electronic grinders, dreamy soundscapes, and pulsing, Berlin School electronics. Recorded live at Sacred Machine and Dust & Stone studios over a five-day stretch, the recordings capture players in the moment, their interplay untouched by overdubs or correction, but are manipulated, cut and paste-style, by Diaz after the fact. The results conjure up familiar touchstones like Cluster and Can, but take on their own unique, desert-inflected quality the spaghetti western “Ghost We Know” and shimmering compositions like “Everlasting” and “Reflections.” Even better is the searching, multi-part epic “Shadow Circuit.” It’s two parts stretch over entire sides of the double-lp, evoking prime Popol Vuh-style mysticism and sandy dread in alternating swaths. “If you pay close enough attention, the architecture of the natural elements is a sentient ecology of the cosmos,” Diaz writes on the band’s Facebook page. “And if you listen close enough, the inanimate structures of cellular life and cellular transmissions will speak clearly. Solar winds speak. Oceans speak. Computer servers speak. And Trees Speak.” Their dialog, as interpreted by Diaz and company is worth the listen. words/j woodbury