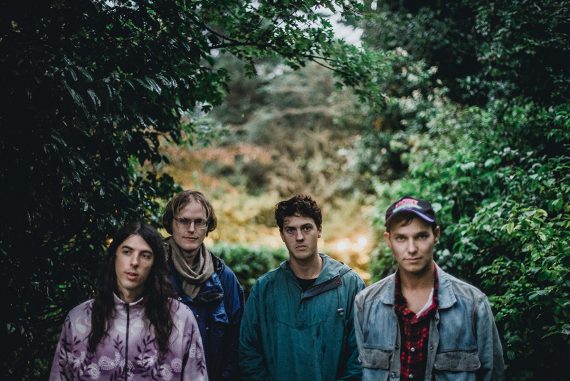 Over and over again on Nap Eyes’ third lp I’m Bad Now, songwriter Nigel Chapman owns himself. In album opener “Every Time the Feeling,” he’s a “space case,” a “loser in a meaningless place.” It’s worse in “I’m Bad,” where he’s a “hated son,” “a disappointment” who’s “so dumb.” In “Dull Me Line,” he’s “bored and lazy.” It would seem Chapman is hard on himself. But here’s the rub: the new record, which follows 2015’s excellent Whine of the Mystic and 2016’s   Thought Rock Fish Scale, is the band’s warmest and kindest yet. Not only does Chapman write with more interrogative passion about his inner life than many songwriters twice his age, here he expands outward, unpacking religious themes on “White Disciple,” pondering connection to others on “You Like to Joke Around With Me,” and wondering what becomes of all our big ideas on the beatific “Sage.”

The lyrical growth is matched by the group’s expanded musical sensibility. Over the shuffling rhythm section of bassist Josh Salter and drummer Seamus Dalton, Chapman and guitarist Brad Loughead  trade shimmering chords and striking melodies. Reliable comparisons to the Velvet Underground and the Modern Lovers don’t fail this go-round either, but more than ever before the band’s instrumental interplay feels like its own thing: restrained, considered, and riveting. “Please don’t ask me to throw my work away,” Chapman sings over Salter’s rolling bass on album highlight “Judgement,” and it’s clear why. Nap Eyes is doing the best work of its career with I’m Bad Now.

Recently, Aquarium Drunkard called Chapman up from his place in Halifax, to discuss the spiritual themes of the record, dissect slang terms, and the relative values of turning inward and outward. The conversation has been edited for clarity and cohesion.

Aquarium Drunkard:  I love that the record is called I’m Bad Now.  It’s a great contrast to imply. To say “I’m bad now” means, “I was previously not bad. Now I am.”

Nigel Chapman: People tend to see things in binary terms often.   With dichotomies in general, with binaries in general, and then specifically [in regards to] badness and morality. That’s something I’ve felt pretty viscerally at the core-of-my-being. I either feel like a good person, like a kind person or a sincere person, or I feel like a totally false or selfish or phony person.  I think having a tongue-in-cheek  acknowledgment of that tendency is a good way to step back from it a bit and look at yourself. And also not expect yourself to be some kind of non-human, you know? A perfect being. Everybody has badness. As you’re growing up, there are a lot of things you need to learn. But you’re a flawed human being, and once you’ve learned [those lessons] you don’t have to hate yourself for it [or get caught] in that pattern of thinking. The title reinforces that, for me anyway. But Seamus [Dalton], our drummer, is actually the one who created that title.

AD: You heard it and thought that it seemed to fit this set of songs?

Nigel Chapman: Yeah, it took us a little while.   At first, it just sounded too silly, but then it started to fit over it or kind of start to mean something in a way that seemed to make sense.

AD: Did you ever use “bad” as slang? Did you use “that’s bad” when you were, as a kid, as a positive statement?

Nigel Chapman: [Laughs] I can’t say that I did.

AD: I know people talked about kids saying “bad” as in “that’s good.” But I don’t know I actually ever knew anyone who used it.

Nigel Chapman:  [Laughs] Yeah, it’s a pretty good one. I remember “wicked.” I didn’t hear “bad” so much, but maybe it’s out there.

AD: On “You Like to Joke Around With Me,” you sing: “Tuning yourself/To catch another’s wavelength/Sure can make a difference/In this world.” I feel like previous albums have found you writing about your inner life.  Did you find yourself projecting more outwardly on this record?

Nigel Chapman:  It’s sometimes hard for me to know where I was at when I was writing. You might remember differently the next day, or a year later, especially when you’re still singing the song and it [takes on] a new meaning. I still feel like, often enough, a hopelessly introverted person that doesn’t know his left from his right in terms of basic social skills. But I think recognition of the social world is important. Hopefully, my level of maturity has changed, and hopefully [that makes it into] my songwriting.

AD: You live kind of far from the other guys in the band, right?

Nigel Chapman: That’s true, yeah. I’m in Halifax in Nova Scotia and they’re in Montreal. It’s about a 12-hour drive or a two-hour flight kind of thing.

AD: How does songwriting work in that configuration?  Does it feel like maybe two parts of an equation, where you start with something and then it becomes something else when it’s handed off to them?

Nigel Chapman: Yeah. The distance does accentuate that, the two-component aspect of things. What I’ve found is that I do need to bring things to the state of semi-completion,   in general, like as far as my own sense of what constitutes a completed song goes. I kind of need to finish a song before it’s really productive for me to bring it to the others. But once I do it really takes off from there. Seamus, Josh,  and Brad all are really creative people. They have great ideas for where to take things, so in that sense, I really defer to them.

AD:   “Every Time the Feeling” is one of my favorite songs of the year. “Oh, I can’t tell what’s worse: the meaninglessness or the negative meaning.” That’s a great piece of poetry. I posted something about it on Twitter, and one of my favorite songwriters, David Bazan of Pedro the Lion, responded to me that it’s the next line that really makes it work: “But I figured out a way/To get on with my life and to keep on dreaming.” I was so caught up in the first half of it, I missed the part where you twist it into something that isn’t completely despondent.

AD:  That’s not exactly the most common thing to happen in your songwriting. That’s not something that you always do — you don’t always offer a relieving spin or slant.

Nigel Chapman:  I have a lot of songs that don’t really have a proper turn…[when] you express existential fear or doubt, if you don’t expectedly tie that off with an  emphasis on the fact that it is one side of the story, [you miss the] compliment side. On one side you have frustration and pain, on the other, you have relief and fulfillment. That’s something that I look for in philosophy in general. You really need to find those things just so that your thinking is balanced, basically.  I don’t always succeed in doing this effectively but it’s nice that it worked in this case. [Laughs]

AD:  I like art that leaves a lot of ambiguity and space, and that chorus does that. It doesn’t wrap things up with a bow or whatever, it just simply states that beyond our own thoughts and ideas and notions,  if you don’t figure out a way to keep going, all you’re doing is effectively driving yourself nuts, you know?

AD:  How did you end up incorporating lyrics by Danika Vandersteen?

Nigel Chapman:  She’s my partner, my cohabiter. She created the front covers for [all three Nap Eyes]   albums, as well. She’s a songwriter and artist. With respect to this song, we, Danika and I, as well as our friend Caleb [Glasser], we had a kind of a group where we just kind of try to encourage each other to write songs and write songs together. It was Caleb’s idea. He plays like under the moniker Fake Buildings — [he makes] really excellent stuff. But yeah, Caleb he’s been my friend since we were younger, like back in high school. It was cool to form this [songwriting group with him].   Basically, while he was living here — he’s no longer based in Halifax — but we were able to get together, and each person would write some lyrics and then they get sent to the next person in a circle. Then maybe the next time we do it, we reverse the circle. It was a great experience and an awesome kind of experiment and definitely encourages you to kind of create more because you’re beholden to someone, you know, you sort of owe it to the group.

AD:  Like the whole album, the song is great. It’s earnest and open, but it’s not saccharine.

Nigel Chapman: It’s cool, especially singing her words. Yeah, I feel happy to be a part of that experience. words/j woodbury