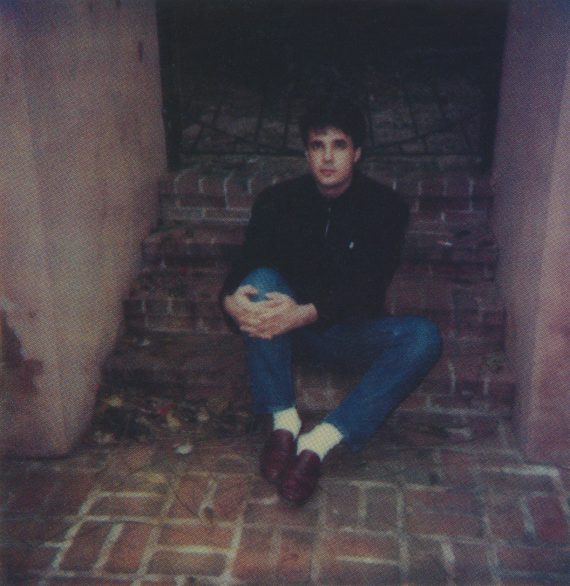 As a young man in Baltimore, Mark Renner created music that coupled the energy of punk and new wave with a sense of romantic longing. Recently, Brooklyn-based label RVNG Intl released Few Traces, a wide-angle selection of Renner’s early work recorded between 1982-1990. The material varies in tone, evoking the thrum of Joy Division at one turn, the alien soundscapes of Talk Talk at another, and the quiet calm of Harold Budd elsewhere, but even as the compilation showcases different sounds, moving from lyrical passages and long stretches of ambient quiet, it maintains a spiritual cohesion.

These days, Renner spends his time in Fort Worth, Texas, creating new soundscapes and working on paintings and woodcuts. Aquarium Drunkard caught up with him to discuss this recent reappraisal, his early days, and his creative nature.

Aquarium Drunkard: There’s a theme of churches being referenced in your lyrics and song titles. In Brandon Soderburg’s notes for Few Traces, you talk about sneaking out of Sunday school in your youth to play guitar in a church’s reverberating halls. What is it about those spaces that moves you?

Mark Renner: One of my favorite things to do in Scottland — I go there every year — is visiting the  St Giles’ Cathedral in Edinburgh. There’s usually an organist practicing there, and I reserve some time at the end of the day to listen. I have a fondness for church music, both traditional hymns and classical.

AD: It feels like location plays a role in the music you make.  You’re in Texas now, Fort Worth, correct?

Mark Renner: Yeah. I came expecting to be here a very short time, and I’m now beginning my ninth year. [Laughs] If you want to make God laugh tell him your plans.

AD: Do you find the landscape of Texas, or Ethiopia, where you spend time doing humanitarian work, or Scottland or Baltimore…do all of these places cast different shades on your sound art?

Mark Renner:  The inspiration is probably more direct in some than in others. I’ve often derived a great deal of inspiration at my folks’ farm [in Upperco, Baltimore County]. It’s next to a cow farm and there’s a pasture in the back of that farm that butts up against my parent’s that’s quite idyllic. I think I derive a lot of inspiration from [that kind of] place.

City life in Baltimore was quite different from where I grew up. I’m not sure there was a great deal of inspiration  in urban life, although I lived in an old Polish community in Baltimore, and at least one of the songs on my album A Desire for Forgetfulness  is about this guy who’d gather with a group of guys on the corner every night and smoke cigars and talk in Polish.  Visually, interpreting a space comes a lot easier to me than to actually try to interpret musically, but I think in that inspiration, it becomes more abstract.

AD: As a young person you listened to stuff like Simon & Garfunkle and Carole King. Was that music you heard from your parents?

Mark Renner: That was my mom’s record collection. She was from even an earlier era, but she quite liked  Tapestry.  Bridge Over Troubled Water –she really played the grooves off of that. She didn’t have a vast record collection, but that was my earliest exposure to music. I remember trying to emulate some of Paul Simon’s picking style in “The Boxer” when I first started playing guitar and failing miserably.

AD: When you were a little older, you began spending time at a record store, the Music Machine. What was it like there?

Mark Renner: It was a meeting place for a lot of musicians and people who appreciated music. When punk exploded, maybe even before, when it first started creeping around, I think people had grown pretty tired of what they were hearing. We were very fortunate to be within earshot of a few radio stations. In Georgetown, you could pick up the signal at night and some of the independent stations in Baltimore were willing to play newer recordings coming out. So I was working in a record shop when Never Mind the Bollocks came out, and I remember getting an import. It was revolutionary I suppose.

AD:  Did people want to hear something more challenging?

Mark Renner:  With the Sex Pistols and the Clash there was an anger behind the energy in that you hadn’t previously heard.

AD: In your own recordings from those times, I hear that energy, but not so much the same anger. Was the lack of angry young man rage a byproduct of your own personal view?

Mark Renner: I don’t think I related to the political side of punk at all. I grew up in the lower middle class, when I was really young it was probably closer to the poverty line, but by [the time I was making music] I was in college and we didn’t have the unemployment in Baltimore they had in the UK. So I didn’t really relate to the anger as much as I did with the desire to overthrow the music that had a stranglehold on the airwaves in America. It was nice: storm the castle, overthrow the guards, become something new.

AD: At that time were you also interested in Brian Eno or Harold Budd? When did more contemplative music come into your vocabulary?

Mark Renner:  I’m embarrassed to admit it, but I think I had Another Green World on eight-track in my car in high school. I’m really dating myself. Those were innovative recordings. Those and David Bowie’s Low, Heroes, and Lodger were albums [that demonstrated the] atmospheric qualities of the recording studio rather than just the song lyrics. Those albums were probably a spark leading to other things, creating a greater interest in production quality.

AD: You struck up a friendship with Stuart Adamson of the Skids and Big Country in Scottland. The two of you corresponded and eventually worked together. When I listen to Big Country, I can hear Van Morrison as much as I can the Sex Pistols, you know? It doesn’s sound quite as claustrophobic as some of the punk rock stuff does. Was there a sense to you that this music was opening up?

Mark Renner: I think by the Skids’ second album, Days in Europa, it was pretty unique in its time. Whereas the first album had more of that fury you’re alluding to, the second album embraced keyboards and synthesizers and electronic percussion. Bill Nelson was the producer of that album, and in his own personal work, he’d begun to work with some of the newer technology that was available at the time.

I think it went from being a lot of thrashing power chords to augmenting that with new sounds. There’s a set of demos Stuart did before Big Country, right after he left the Skids, that are electronic in nature. I think he liked playing with that, but I think he made a conscious decision at the beginning of that band to be more of an organic band in terms of using guitars. I know he loved Television. The album Adventure — he loved the idea of twin guitars weaving in and out of each other. I think by that time, whether consciously or not, people realized the spark of fury of that ignited punk had evolved into something different. I guess what people call “post-punk.”

AD: Your early music makes room for  traditional qualities like beauty, space, and lyricism — was that always important to you?

Mark Renner: I think that’s the sound of a young man trying to find himself in many ways. As I progressed and had more opportunities put things down, lyrics became more important to me. I remember obtaining my first synthesizer and realizing all the sounds I didn’t hear on records. You could add delay and depth and echo, use reverb to create a bigger sound than what you were working with on a four-track cassette recorder.  I was concerned with quality control. I wanted to have something to say, and say it in a poetic way.

AD:  There’s a lot of spiritual language in these songs: “Saints and Sages,” “Jars of Clay,” “The Eternal Purpose.” Do you view your songs as spiritual expressions, and are they indicative of a specific spiritual ethos?

Mark Renner:  I think that all that I do, both my  visual work and the music I do, is somehow tempered by a spiritual view. Whether it’s meant to be literal or not, I can’t really say. I don’t remember what I was thinking at the time, or how some of those titles related. But there’s certainly a spiritual element in the things I do.

AD: Do your paintings and woodcuts feel like similar expressions to you as your sound art?

Mark Renner: I’ve spent a lifetime analyzing that and I’m not sure I’ve ever come up with a concrete answer. It’s kind of like nailing Jello to a tree. It’s hard to really put it into words, and the moment you do, it kind of loses its  mystery. I have a compulsion to create and I have difficulty remaining at peace when I’m not. It’s a gift, something I have to exercise, visually and in music. For many years, when I first came down to Texas, I focused mostly on my visual work. I’d never had the gift of some much uninterrupted time for that. But at the same time, there was a nagging in the back of my ear that I would like to work on  music. words/j woodbury