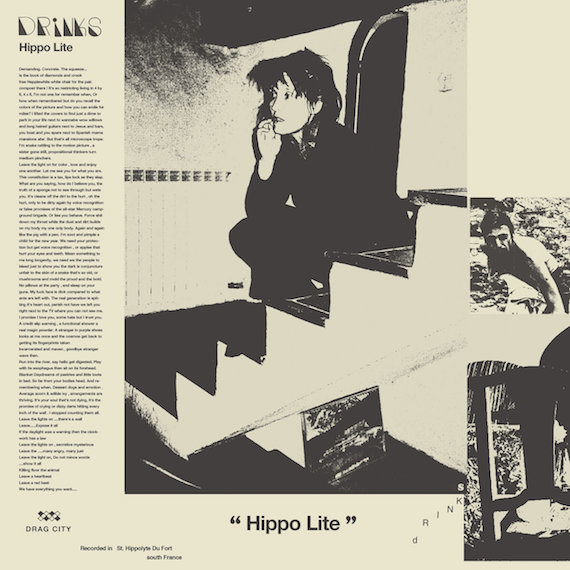 Marfa, TX: Earlier this month, in what appeared a makeshift rehearsal space, Bradford Cox (Atlas Sound / Deerhunter), Warpaint’s Stella Mozgawa, White Fence’s Tim Presley and Cate Le Bon live broadcasted an impromptu, lengthy jam session via Cox’s Instagram account. Indeed, to be a fly on the wall. The principals were gathered   due to their involvement in this years Marfa Myths; the recurring music festival produced and programmed by the Brooklyn label Mexican Summer. Accordingly, things got pretty far out with some inspired moments peppered throughout.

Which brings us to Drinks, the collaboration by two of the aforementioned players, Presley and Le Bon. This past week saw the release of  Hippo Lite, the pair’s second album together under the Drinks moniker. Sharing a label, and having worked closely on one anther’s projects in the past, the artistic union’s 2015 birth seemed inevitable as the two seem to effortlessly intuit and compliment the other. Recorded in the span of a month at a commune in southern France, and self-described as “an album made for each other by one another with no hands, eyes or ears piercing the bubble,” Hippo Lite aesthetically lives and moves within the guise of post-punk in the same irreverent way as Wire’s Chairs Missing and 154. Both angular and crisp, acoustic and gentle, round two of Le Bon and Presley’s collaboration retains the disjointed idiosyncrasies of its predecessor, and ultimately comes off like a worthy post-script.