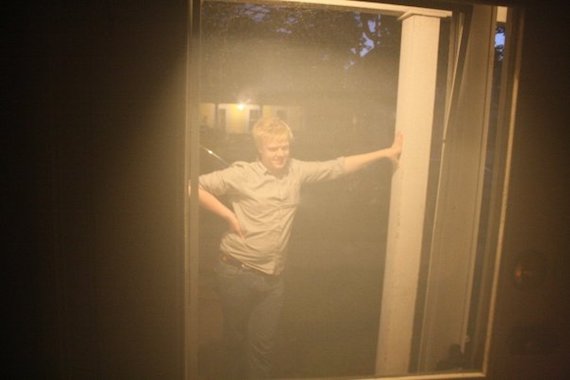 This track was recorded in the kitchen of 1405 Winchester St. in Fredericksburg, Virginia sometime in October or November of 2009, about a year and a half before Daniel would self-release his first LP Apparitions at the Kenmore Plantation under the name Sacred Harp. “Feast of the Green Corn” would appear as the opening track on that album, and in place of a lush, locust-like drone backing his dense, open-tuned picking, this early version is accompanied by the sounds of creaking wood, beer bottles popping, and friends hollering in the next room — an intimate listening environment familiar to anyone who has ever seen Daniel at a house show. I was immediately transfixed by this vast, melodic piece, and fortunately Daniel let me capture it on my Tascam 4-track as he perched on a rickety stool in the corner of a dirty kitchen on a crisp autumn Fredericksburg night.

Up until this point I don’t think many of Daniel’s friends had heard much of his material beyond some early experimental lo-fi bedroom recordings, and this song was a first sample of the masterful, focused solo guitar work that he has been cutting for nearly a decade. Even though I’m still blown away by his earlier recordings, on each new album he manages to showcase different, subtle aspects of his playing, iteratively refining his own style while paying respect to the canon of solo guitar players that came before. Daniel recently sent me his forthcoming album The Morning Star, and it’s probably my favorite album of his so far. It blends his distinctive six-string and slide picking with layered noise, drones, and found-sound, and is reminiscent of his earlier work as Sacred Harp — a callback to an era when creative ideas, later realized, were still in gestation. It’s a bit insane to think that Daniel wasn’t even 20 when he recorded this song, but looking back on the past almost-decade, it’s a preview of the kind of material that followed, and an indication of the success he would later achieve. I am happy to share this with fans of Daniel and AD alike. Love you Dan. words / c devine