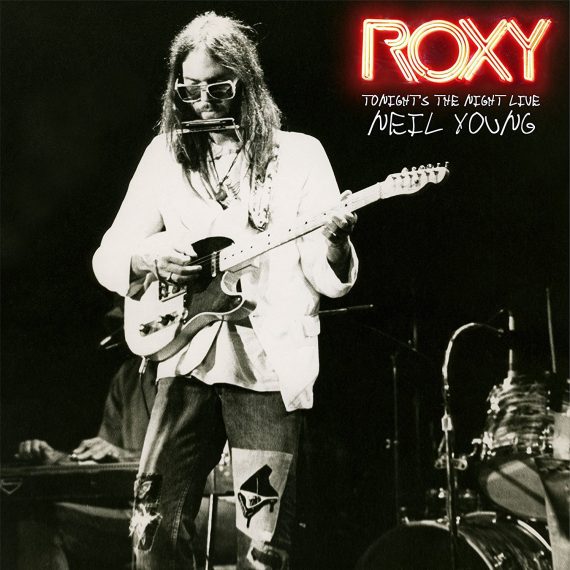 Neil Young is proving himself to be the busiest senior citizen in the rock ‘n’ roll world this year. He’s got a doofy sci-fi western available to stream on Netflix. He’s brought Crazy Horse back out of the barn. He’s pretty much blogging over on the NYA Times-Contrarian. And on the archival front, Neil has just released another winner – the debut performances of his classic Tonight’s The Night lp, recorded live over the course of a couple of extremely boozy nights on the Sunset Strip in 1973. Roxy – Tonight’s The Night Live is an absolutely essential addition to songwriter’s ongoing Performance Series, giving listeners a front-row seat at these historic gigs. You can smell the reefer and taste the Jose Cuervo. Welcome to Miami Beach.

Neil and The Santa Monica Flyers (drummer Ralph Molina, bassist Billy Talbot, guitarist/pianist Nils Lofgren and pedal steel-ist Ben Keith) had just wrapped recording Tonight’s The Night, so the songs stick close to the original arrangements – in some cases (such as “World On A String”) they’ve managed to get quite a bit tighter. But there’s still plenty of wildness – the devastating losses that inspired many of the songs (Crazy Horse guitarist Danny Whitten and roadie Bruce Berry) were just months old, so the wounds are raw.

“What we were doing was playing those guys on their way,” Young told Bud Scoppa in 1975 of the Tonight’s The Night era. “I mean, I’m not a junkie, and I won’t even try to check out what it’s like. But we’d get really high–drink a lot of tequila, get right out on the edge, where we knew we were so screwed up that we could easily just fall on our faces … We were wide open … just wide open.”

The Roxy performances are very much in keeping with that vibe, whether on the wobbly party anthems (“Roll Another Number,” “Walk On”) or the lonely laments (“Albuquerque,” “Tired Eyes”). Tied together with Neil’s sleazoid banter, the whole package paints a portrait of a songwriter climbing out of the wreckage to create some truly powerful art. Everything may be cheaper than it looks, but this one’s priceless. words/t wilcox