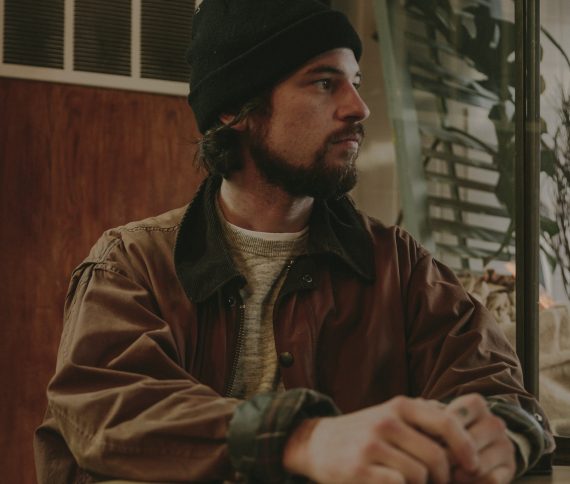 Catch Ryley Walker one day, and he may be forecasting his future as a bald, ponytailed guitar shredder; catch him another, and he’s sketching out a scene from the mid-2000s, scheming to pick up a book of pop theology and some blog rock. But somehow, his new lp, Deafman Glance, makes space for the whole of Ryley, a young dude whose early records felt like lost Britfolk artifacts, but whose ubiquitous social media presence feels pretty damn modern.

A proggy, intricate, and often deadpan chunk of jazz-folk, it’s also Walker’s most personal record, one that finds the singer/songwriter opened up in unexpected ways, obsessing over debt, bus fare, and the lack of a master plan. “It’s not very fun/Being a fun person,” Walker sings on “Can’t Ask You Why,” and then as if acknowledging a tendency for overthinking, adding “And I can hear you sigh.”

Recently, AD caught up with Walker on the road, to discuss how Chicago influenced the new album, honing a poetic voice, and why saying “stupid” things online can be a folk-rock boon.

Aquarium Drunkard: In the notes that accompanied the release of Deafman Glance, you wrote about how making it stressed you out. How do you feel about it now?

Ryley Walker: Like any other paranoid, fucked up artist, I loathe what I do one minute and love what I do the next. I like it, yeah.

AD: Where does the title come from?

Ryley Walker: It’s the title of a movie by this film and theater director from the Lower East Side, Robert Wilson. Honestly, I don’t know his work at all. I’m not really into theater either, but when I was a little kid, maybe nine or ten years old, my mom took my sister and me to the Museum of Contemporary Art, in downtown Chicago. You know how they have those viewing rooms, to show a movie or whatever? I sat down with my mom and watched this movie — a really fucked up, scary movie. It’s was not for kids. I was crying because I was so scared. For years and years, I had these stray memories in my brain, thinking, “What was the name of that fucking scary movie that scared the shit out of me?” 15 years later, I’m thinking, “What the hell was that movie called?” And I came upon it, and it was Deafman Glance. I was like, that’s a record title.

Ryley Walker:  It’s a personal record — it’s composed, but at the same time, I do a lot of improv shit in Chicago with my friends. I’m applying that toward the songs. That has more influence on this record than a bunch of Bob Dylan or Neil Young songs, you know what I mean? The out, improv thing going on in Chicago — which the city is well known for — it kind of bridges a lot of musical forms for me. That was more of an influence than anything.

AD: How long have you lived in Chicago? Before you moved there, were you interested in the sounds coming out of the city?

Ryley Walker: For sure. I’ve lived in Chicago for 11 years in August. Jesus fucking Christ. And you know what the stupidest fucking thing is, about living there so long? The Sears Tower…I’ve never been in that fucking thing. My entire life, I’ve never been in that goddamn building. Chicago, it’s this big iconic, world-renowned city, and the things it’s known for, I haven’t seen them or done them. You kind of forget how big an environment you live in.

But I’ve really been influenced by Chicago the last year. Like, “Oh yeah, I live in this giant city where when you walk past Geno’s East Pizza, there’s a line down the block.” People fly in from Europe or Asia or wherever just to get a slice of giant fucking pizza. I live in a city people spent months crossing the ocean to get to in the past, and your brother or sister would die before you’d get there and you’d cry. Chicago’s everything to do with the music. I only grow up an hour or so away, in Rockford, but ever since I was a little kid, I’d take weekend trips here. I’d love nothing more than walking down Michigan Avenue. Go to Tower Records downtown and buy records. Not that Rockford is culturally devoid. There’s a lot of cool history there. But the next step was always about going to Chicago.

AD: When we talked for the Transmissions podcast, we talked about how your music has moved more and more away from singer/songwriter tropes, sort of British folk singer stuff that you took and really internalized a lot on the first couple records. Lyrically, you’ve moved away from that. A song like “Accommodations,” it hones in on the same voice you use on Twitter or Instagram, you know? And a lot of people know you because of those channels.

Ryley Walker: Yeah. Social media is just an outlet to say stupid, funny shit. I’ve always been a fucking actor, you know? I’ve always been doing dumb shit, making up dumb lyrics. In the past, I’d have a belt buckle that was really cool and make up this romantic Nick Drake-influenced character. It wasn’t good. But I finally went “fuck that.” I can just write about my reality. My reality is the only one I got. There’s a lot of funny stuff, a lot of sad stuff. That’s what I can draw from. I think it’s about giving less of a shit, you know?

I came out swinging. I’m pretty self-critical. I didn’t feel comfortable doing that at all. But woe is me. It’s not like I have to wake up at 5 AM and go to work in a muffler factory and eat a lunch of Miracle Whip and white bread. I’m still evolving. I want to learn. I never want to make the same record twice. I feel like I’m finally coming to a place where I enjoy writing lyrics.

The way I talk on social media is the way I talk in real life. I’m glad people enjoy my Twitter. Sometimes people come up to me and they don’t even know my music, but they like my Twitter. That makes me happy. I like when people can relate to that stuff. And it’s really easy. I’m usually just shitting or at a bar or something. “Hey, this dumb, I should put this out into the world.” Sometimes the ball really connects with the bat and it’s like crack, over the Green Monster. People will be like, “That was a great tweet.” It’s mostly a lot of dumb observations about being fat when I was 12. I’ve somehow managed to make that into a part of my career. Kids, if you’re listening: Be fat at 12 and then pick up a guitar one day. words/j woodbury