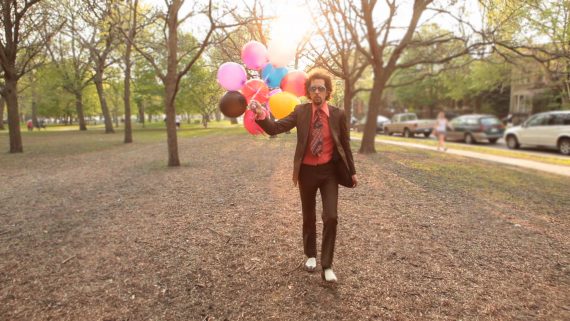 Based on my limited interactions with the mysterious songwriter, Liam Hayes doesn’t do anything half-heartedly. That much is clear from his records, like 2002’s Fed and 2014’s Korp Sole Roller, two chunks of magnificently realized pop. Recently reissued by Be With Records, the albums are the results of fine songcraft, intensely long hours logged in the studio, and uncompromising vision.

But there’s also his dedication to living extremely offline. No Twitter account, no Facebook, not even text or emails. You wanna interview Hayes? You gotta know someone who knows someone (in this case, producer and Wilco sideman Pat Sansone), type up some interview questions, send them on over and wait for scanned, type-written pages to show up.

It would be easy to chock all this up to savvy mystique cultivation or the reclusive genius routine. But I think there’s something deeper at work. Whether crafting ambitious soundtracks (A Glimpse Inside the Mind of Charles Swan III) or looser, more freewheeling projects (like 2015’s Slurrup), Hayes adheres primarily to his own exacting standards.

It’s those standards that made Fed an underground legend, a set of songs too sprawling to work within the Chicago indie rock economy of the early 2000s, but too catchy and beautifully built to escape the attention of dedicated record heads who heard in its grooves traces of Isaac Hayes, the Beatles, Todd Rundgren, and Burt Bacharach. Finally circulating alongside its spiritual cousin Korp Role Roller, Fed stands a better chance of being recognized this time around, though Hayes mostly comes across as bemused about his prospects at best.

Hayes is currently at work on two new lps, Mirage Garage and Pink Sunglasses, but dedicated some time at the typewriter for this exclusive exchange with Aquarium Drunkard.

Aquarium Drunkard: You don’t interact with social media or even text. What’s the rationale there? Beyond the benefits of, you know, not having your personal data hijacked and sold by and to monolithic entities, what’s the appeal of not being connected through these avenues?

Liam Hayes: My decision to not participate in mediated sociality (newfangled software and behavioral science, old-fashioned mass exploitation) is not some quaint exercise in disengagement from the world. The reward for my non-compliance has been isolation both personally and professionally. I think it’s important to give more than just a cursory glance at the serious questions about exactly what the surveillance economy is, and its negative effects on human beings. How do you feel laboring as an unpaid cultural producer on an electronic assembly line every second of every day?

AD: Well, I feel pretty strange about it, when I actually pause to consider it that way. We’re more connected to pop artists than ever before thanks to things like Twitter and Instagram. But not you! Do you think there’s an artistic benefit to a little distance between the art and artist?

Liam Hayes: I really don’t care to have anything to do with parasitic, unregulated media companies. I think there’s great artistic benefit to keeping these outfits at a distance and to being paid for your work.

AD: Fed and Korp Sole Roller are finally available outside of Japan, but for a long time they were only available there. Have you spent much time in that country? Have you ever theorized about why Japanese audiences connected to these records in a way that other audiences didn’t (at least initially)?

Liam Hayes: My records tend to be more appreciated in places where they actually receive distribution. Japan is one of those places. The UK is another. That said, even when I did have distribution here at home, commercially, it was always a hard sell. This is a very short-term memory, bottom line kind of place.

AD: Reading through the biographical notes about Fed, it’s clear that you put a tremendous amount of effort into its recording, and personally invested a lot into it financially. You even sing “My creation has drowned me,” on “Whose Blues.” When you listen now, years later, do you still hear a lot of the work that went into it? Are there times when you can hear it just as a great album, the way I hear it as a listener?

Liam Hayes: Toward the end of the sessions, I remember having engineers coming in on shifts. We’d been overdubbing for thirty-six hours straight and at points I was literally playing in my sleep.

AD: Getting the album released as proved to be a pretty monumental task. Drag City couldn’t (or wouldn’t) release it, and listeners had to work to find it upon release, or settle for a more stripped down version via the Underfed release. Yet, you seemed to have a kind of unflagging belief in the album and your vision. You sing “Somebody told me I was great,” on “Blown Away.” Was it often a case of you telling yourself that, about this album? Did it get hard at times to hold onto that belief?

Liam Hayes: That outfit put no money into the production and were unwilling to pay even a paltry sum to license the record. When I finally found another company: After Hours in Japan, they reacted by mischaracterizing me and distorting the details of our business dealings in the press. I believe their shenanigans thwarted my efforts to secure a wider release for the album.

AD: You worked with a wide cast making Fed, including horn arranger Tom Tom MMLXXXIV and drummer Morris Jennings, as well as all sorts of Chicago players from the indie rock scene. What was it like uniting these older, seasoned pros with younger, more experimental musicians?

Liam Hayes: I could never have made that record for a major, or “indie”, label. They would have steered it in one dumb direction or another. Because I wasn’t having to answer to anyone, I was free to bring disparate approaches together and in the process, something unique was created.Tom Tom, Morris et al., despite their being musical heavyweights, were unpretentious and open to different situations and ideas. I’m lucky to know and have known them.

AD: Korp Sole Roller didn’t follow Fed chronologically in your discography, but it does make a lot of sense to pair with the album. It’s a more stripped down take on things, but it’s no less realized. What kind of conversations did you and Pat Sansone have about the vibe you were aiming for with this one?

Liam Hayes: I don’t really remember having conversations about any particular kind of approach being taken. I just remember the album coming together over time. I played and sang a lot, and had plenty of input, but Pat really created the landscape that the songs inhabit. Pat’s production really shines on it.

AD: Your work these days is either more stripped down and rock & roll – like Slurrup – or more orchestral, like the A Glimpse Inside the Mind of Charles Swan III soundtrack (which includes previously written songs). But I’m curious about the throughline that connects both approaches. No matter the instrumentation or style, it feels like you’re trying to make sure “you” are in the songs. How important is it to keep things personal – offer “A Glimpse Inside” – even as you’re working in aesthetic formats that bring to mind other songwriters?

Liam Hayes: You can create personal work that’s still part of an idiom.

AD: I guess what I’m going for is: how important is it for you to make it personal, not pastiche? And how do you get the songs to that place?

Liam Hayes: I think you just have to be honest with yourself. Ask yourself what you’re doing. What is it that you’re trying to communicate? Do I need to say what I’m saying? Is this worth saying? Is it worth the time that it might take to really make it cohesive?

AD: Is the idea of being a “cult figure” at all appealing? Did you connect to cult records growing up? Do you still connect to those kinds of records?

One thought on “Liam Hayes (of Plush) :: The Aquarium Drunkard Interview”