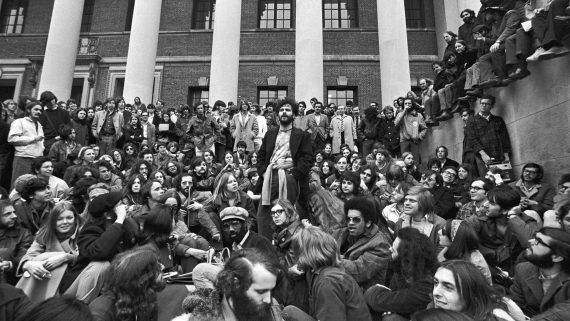 As we approach the 50th anniversary of the 1968 Chicago Democratic convention, where hippies, Black Panthers, the MC5, and many others clashed spectacularly with The Man, few figures seem more worthy of reexamination than Jerry Rubin. Along with his compatriot Abbie Hoffman, Rubin helped articulate the voice of young America, employing vibrant and often satirical approaches that utilized performance art and provocation. The inside story of this counter-culture icon, anti-war activist, and all-around troublemaker comes to life in Pat Thomas’ Did It! From Yippie to Yuppie, which traces Rubin’s journey from high school journalist to stoned political freak and beyond. Speaking with 75 of Jerry’s closest peers, many of whom have never spoken openly about their experiences until now, Thomas creates a compelling, detailed narrative. It’s history, but a wild adventure too.

Thomas, a member of the psychedelic collection Mushroom and author of essential collections like Listen, Whitey! The Sounds of Black Power 1967-1974 and Invitation to Openness: The Jazz & Soul Photography of Les McCann, walked us through  assembling this intense look at Rubin’s life.

Aquarium Drunkard: What attracted you to Jerry Rubin’s story? He was a household name, yet Abbie Hoffman became more well known. Why not Rubin?

Pat Thomas: Over the past 30 years, there have been about six different books about Abbie Hoffman, [but] there’s never been one about Jerry Rubin until now. That’s like saying there have been six John Lennon biographies published, but nobody has ever done a McCartney book. During the 1960s, Jerry & Abbie were joined at the hip, the co-leaders of the Yippies (Youth International Party), both equally pissing off Republicans, squares, and people who loved that America was killing people in Vietnam.

AD: How did you gain access to Jerry’s archives?

Pat Thomas: I won the respect of Rubin’s family when they saw my first book Listen, Whitey! The Sounds of Black Power 1965-1975, coupled with the fact that nobody else had ever expressed serious interest in digging through the thousands of photos, documents, letters, journals, and newspaper clippings spanning from the 1950s until his death in the early 1990s. Jerry kept letters from Yoko Ono, [members of the] Weather Underground, Eldridge Cleaver, Abbie Hoffman, Norman Mailer, and more. His own writings were also essential, since I couldn’t interview him. He wrote notes to himself all the time that I could reference. 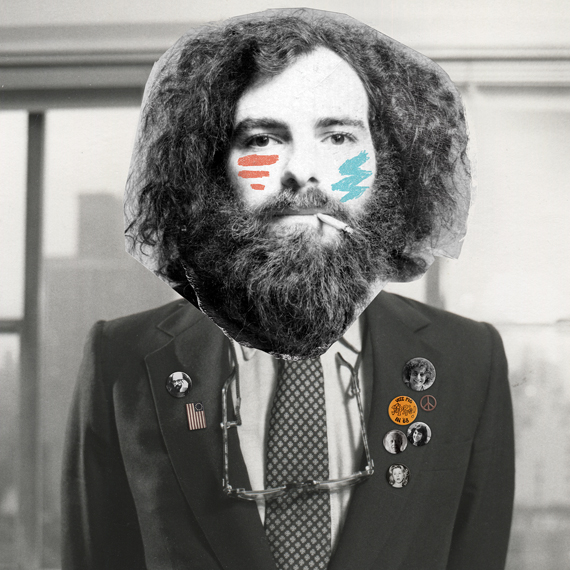 AD: What was the most shocking thing to find in the archives?

Pat Thomas: Hmmm, well, the letter that Yoko Ono (on behalf of John Lennon, and on Apple Records stationary no less) sent to Jerry Rubin in 1972, in which she discusses the revolution, the pigs, violence in Chicago ’68, and brutally psychoanalyzes Jerry because his parents died when Jerry was just 20 years old. You can see at the edge of the letter where he started to burn it (out of anger) but then thought better of it.

AD: Jerry was a conduit between the radical world and the entertainment world. He had an influence on the general public. Do you think that was intentional? Or was it more of a sign of the times that those worlds were blending?

Pat Thomas: The late 1960s-early 1970s were an era when on a college kid’s dorm room, there would be a poster of both Mick Jagger and Angela Davis.  It was an era when Jerry Rubin was kind of a rock star in a way. Young people looked towards musicians like Dylan and Lennon to tell them how to think politically. It was an incredible time when music and politics really intersected in high school and college kids’ minds. Rubin understood this and plugged into it.

AD: Was it easy to locate people in his orbit to help tell the story from a candid level?

Pat Thomas: Jerry’s ex-wife Mimi Leonard knew everyone and how to find them — she was amazing, opening up her phone book and email account — contacting people in advance, saying, “You gotta talk to Pat, he’s the real deal, now is the time.” Many people who had avoided the spotlight for decades came forward to candidly speak about their friendship with Jerry. It was often the people you’ve never heard of who had the most insight, their memories were unclouded by not being famous themselves.

AD: Jerry and Abbie’s relationship can be compared to that of brothers. Lovers, yet also sworn “enemies.”  What kept them together as long as they were?

Pat Thomas: Well, it wasn’t a real long partnership. It started in 1967 and ended around 1972 when Jerry dropped out of the political arena and Abbie was arrested soon after for dealing cocaine and disappeared until 1980. That said, during Abbie’s underground on-the-run years, Jerry saw him and talked to him often. Then in the 1980s, they did their infamous Yuppie vs. Yippie debates. Surprisingly, I found out while writing the book that Abbie was doing some serious investments in the stock market privately while bashing Rubin for doing it publicly — but one key thing to stress here — Rubin was NOT a Republican or a Reaganite! He was liberal Democrat wearing a tie, like Tom Hayden and also Jerry was never a stockbroker. He was marketing green energy, solar panels and ecology on Wall Street in 1980, a decade before anyone [in finance] really cared about the environment.

AD: Can you tell us more about Stew Albert? His name as not familiar to me at all, yet his friendship with Jerry and Abbie was very significant. Why is his name not more known in the bigger story of the radical movement?

Pat Thomas: Stew was a key member of the Yippies. If Jerry & Abbie were co-presidents, Stew was the vice-president. Stew was a decades-long best friend to Jerry, always helping Jerry through thick and thin. Stew remained a militant activist until his death from cancer in Portland, OR, in the mid-2000s, but he never sought the spotlight. Google his New York Times obit, it’s brilliant.

AD: One of Jerry’s earliest iconic protests was the exorcism and levitation of the Pentagon in October 1967 with Abbie, Allen Ginsberg, Ed Sanders of the Fugs and author Norman Mailer. Do you think this “stunt” brought them further to the attention of the President and FBI, for better or worse?

Pat Thomas: Jerry had been a journalist before he was a Yippie. He knew that if you stood on a platform in front of the Pentagon with some detailed, yet boring political-science lecture about how the Americans got into Vietnam after World War II, no thanks to the French government, nobody including the media would listen. But if Jerry said we’re all gonna run naked through the streets of Washington, DC, smoking dope to protest the war, that everyone would pay attention to that and would write about it.

AD: The birth of the Yippie was a direct result of the Pentagon protest as Jerry encouraged immediate action over planned ones. He’s quoted as saying “I support everything that puts people in action, which creates disruption and controversy, which causes chaos and rebirth.” This is a pretty radical change in a few short months. Could the Yippie have  existed without the open-minded youth? Or without the underground press?

Pat Thomas: The youth of America was ripe for some weird-ass-shit. They were smoking dope, dropping acid, digging Hendrix and the Beatles, and watching their friends get killed in Vietnam for no good reason. So when Rubin started talking vividly, young people dug what they heard and the radical underground press spread the word like gospel. Nice work if you can get it! 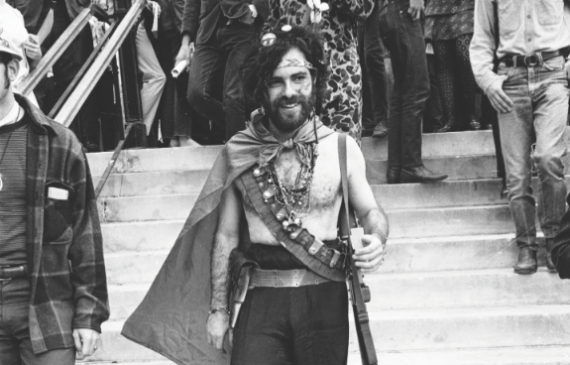 AD: The 1968 Chicago Democratic Convention was a bleak moment in American history. People saw on live TV police brutality and the youth of America saying   “fuck you” while fighting back. Do you think Jerry and Abbie anticipated it getting as out of control as it did?

Pat Thomas: Well, they were wishing for that. They knew that America responds to violence, that the network news would cover protests more than love and kisses. But, nobody could have foreseen how the police state of Chicago would be bashing in heads like crazy, against mostly non-violent student protesters. This all came to a head two years later, when four students were shot to death at Kent State. Bottom line is: even if you’re a white middle-classs college kid, if you’re fighting against the military-industrial complex you might get killed. Sadly, many of our black youth have been killed for reasons much less than that, like just walking down the street.

AD: During the ensuing court case against the Chicago Eight, we watched as Black Panther Bobby Seale was stripped of his constitutional rights of choice of counsel while the other seven treated the entire trial as a joke, often mocking Judge Hoffman to his face. Besides Seale, all seven were acquitted. Do you think at any point they were afraid of doing significant jail time?

Pat Thomas: Nixon and Hoover of the FBI wanted these guys locked up for decades. Later, it was discovered that the judge in Chicago was taking orders from the federal government, which is illegal. Yeah, it’s amazing that nobody got locked up for a long time. Very lucky, actually. Despite all the hell-raising that the Yippies did during that trial, the fear was very real.

AD: As the 1960s closed and the 1970s began, Jerry’s attitude turned to the “Me Decade” and the New Age movements.

Pat Thomas: He was burnt out. Getting your head bashed in by cops at every protest gets tiring after awhile. The Chicago Eight trial was emotionally draining, and then when Nixon got re-elected in 1972 by a landslide, it was simply depressing. All that hard work of protesting seemed fruitless. Had he not recharged his batteries in the early 1970s with health food and yoga, he may have turned to booze or hard drugs to ease that pain. I admire Jerry for taking care of himself. Strangely, some radicals gave him shit in 1972-73 for shaving off his beard, eating better, and exercising.

AD: With how politically charged America is right now, are we going to repeat 1968? Do you think we have anybody currently akin to Jerry? Or do you think we have given too much power to celebrities? Does the Yippie even exist anymore?

Pat Thomas: Let me start off by saying that today’s New York Times has a full-page interview giving Celtics basketball star Kyrie Irving the opportunity to tell us that he believes the earth is flat, that it being round could be fake, distorted history. Another section of the paper has Kanye telling us that Trump is a kindred spirit. Isn’t America grand in 2018? Somebody responded by saying that, “Flat or not, Kyrie is a great ball player.” I replied, “That’s why I love modern day celebrity culture, the dude is a great basketball player, so let’s give him as much space as possible to spew horse shit to the masses.” We don’t really have leaders anymore. The Occupy Movement was cool, but can you remember one person at all from it? I think the late-night comedians on TV are doing some good work kicking against the pricks, as it the high-school student David Hogg who lost his friends in a school shooting. I love his Twitter posts. words/d norsen