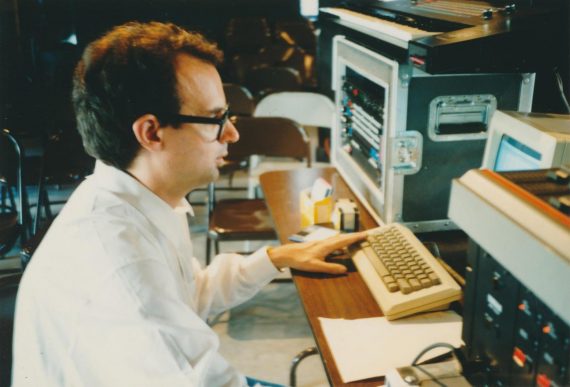 Listening to Carl Stone’s second compilation for the excellent archival label Unseen Worlds, it’s not uncommon to find yourself completely lost in a web of sounds. It’s not necessarily a disorienting feeling. Instead, it’s kind of like wading into a cool pool. It’s only once you’re all the way in that the temperature feels right. Utilizing samplers and armed with a keen ear, Stone’s pieces, like 1993’s languid and majestic “Banteay Srey” and 1988’s sprightly “Sonali,” fall together in surprising ways; the moods and sensations shift, but the expansive feeling always remains.

Electronic Music from the Eighties and Nineties is the sequel to the 2016 compilation Music from the Seventies and Eighties, and it documents Stone’s shift into more tranquil waters. Recorded between 1983-1993, right as approaches similar to Stone’s avant-garde layering and sampling were being explored in the mainstream via hip-hop, the collection presents a unified vision comprised of disparate sources – Mozart melodies, flutes, a Burundi children’s song – brought together in a way that draws an elegant line connecting Steve Reich’s chopped and looped epics to Robert Fripp’s swelling Frippertronics suites to William Basinski’s The Disintegration Loops. We caught up with Stone from his home in Japan to discuss the music gathered here and his ever-evolving process.

Aquarium Drunkard: What initially brought you out to Japan? How long have you been out there full time?

Carl Stone: Since 2001. I first came to Japan in 1984 to perform a piece. I applied for and got a grant to live in Japan for about six months from the Asian Cultural Council. That was in 88-89, and that led to a lot of subsequent opportunities. In 2001, I was over and I got headhunted by a someone at [Chukyo University] who was looking to fill a slot they had vacant. I’d never really thought about teaching before. I’d visited many times and I liked Japan, but I never thought that I’d live there. But they made me a decent offer and provided the kind of stability and I said, “Why not, let’s do it.” I’ve been here ever since.

AD: How often do you get back to the states?

Carl Stones: Two or three times a year, minimum. I haven’t cut my ties. I have a lot of friends and family and I keep an apartment in Los Angeles as a sort of pied-î -terre for me when I go back.

AD: You’ve made extensive field recordings of urban spaces in Japan. Have you done similar stuff in American cities?

Carl Stone:  I have some material I’ve recorded in the US that’s made it into a composition or two, but I haven’t for the most part. The Tokyo soundscape is really fascinating. It’s part of the reason I really enjoy living here. It’s a city with a lot of very characteristic sounds you can’t hear anywhere else. What’s the soundscape of New York really? If you were to take the sound of the traffic out, the whole thing would collapse. With a place like Tokyo, there’s so much more there.

AD: That’s a huge part of where your work comes from, that attention to sound and texture of sound. You studied at the California Institute of the Arts with Morton Subotnick. What sort of lessons did you learn from him in regards to listening right at the beginning of a new era?

Carl Stone:  It definitely felt new at that time. Technology was emerging. With Mort, we didn’t study the practicalities of electronic music. That was work with other teachers, like Barry Schrader – he was the teacher who taught me the nuts and bolts of how to get a synthesizer humming. But with Mort, it was kind of on a higher plane. It was about analysis, form, the choices that a composer makes. He would have us listen to a Mozart sonata, and the pianos would go [sings climbing melody] and he’d go, “Why did it go up? It could have gone down, but there’s a reason it went up.” We would analyze that or his theories about Beethoven’s Fifth Symphony. We were analyzing contemporary works for sure, but also work from the traditional literature. We would play our own music and Mort would analyze and criticize it. It was very much about [developing] a keen critical mind.

AD: In a field that was so new and open, did establishing a critical framework help you create?

Carl Stone: He was setting up a framework. He wasn’t teaching us a particular style or method to compose using, but setting up a way to look at music and art in a broader context and giving us the ability to fill it in with our own personal language.

AD: You spent time dubbing records in the library at CalArts as well. What was that like?

Carl Stone: Mort set me up with that job. He suspected that might be a good gig for me and he was right.  It consisted of me sitting in a dungeon, a windowless, airless room…

Carl Stone: [Laughs] …with multi-turntables and tape recorders. They had all these LPs, a fantastic collection of stuff: classical, esoteric music, contemporary music, and world music. It was all LPs. There were no CDs in those days. We’re talking ’73, ’74. They knew they had to archive them to preserve them, the records would eventually wear out through use, or warp, or break, or get stolen. So they needed something as a backup. The archive medium at the time was the cassette, so that was my job. They had 10,000 LPs – I don’t know, a large number of LPs – and my job was to copy them onto cassette. Because there were so many, it would have been impossible to [dub] them serially, one after the other, so I had three or four going at a time. I could listen to the process. You’d have a string quartet on turntable one, some African music on turntable two, some electronic music on turntable three, and [I’d think] “Hey, this is kind of interesting. What’s going on here?” I didn’t think of it was composing really, but I started to notice what would happen when these musics would be constantly recontextualizing themselves. That was the starting point originally for my work as a composer.

AD: I’m sure it’s changed over time, but at least initially, were you more drawn to the contrast between different sounds or the synchronicity, how things seemed to work together? There are elements of contrast in your work, but also extreme cohesion utilizing disparate sources.

Carl Stone: In the beginning, it was a random process. I wasn’t thinking about it. But I noticed these collisions that would happen. Sometimes things would mesh, sometimes they would clash. There was no value judgment as to which was better. They were both interesting to me. There are [instances of] both in my music; both of those moments are interesting. I hope they are.

AD: When did you begin working in radio?

Carl Stone: That came later, after I graduated. I was sort of adrift and I fell into radio [at] public radio station [KPFK].  This is sort of before NPR and really gotten going, but there was a network called Pacifica, which still exists. In Los Angeles, which is where I was living, it was kind of the main forum for alternative political thought or music outside the mainstream. I started working with them, volunteering my time. Eventually, I started working there and got a show. I would be the host of a late-night show – 10 to midnight or midnight to 2 AM, I forget – playing electronic music. Eventually, I started doing a morning program, and then I became the music director and so on.

AD: Were you free to play whatever you wanted?

Carl Stone: Pretty much. It was really freeform. When I was on late at night, I could do literally whatever I wanted. My tendency was toward electronic and avant-garde music, the kind of things that really nobody else was playing. When I started a morning program, I was self-constrained. Nobody wants to listen to hard-edged metal electronic music at eight o’clock in the morning. My tastes also ran to early classical, Baroque, music from the Renaissance, so on, and that seemed more appropriate for that time of day, mixing in a little bit of Morton Feldman here and there, a little Lou Harrison, or John Cage. People got accustomed to hearing that kind of mixing.

AD: The work featured on this new collection comes from the ‘80s and ‘90s. While you were coming from an avant-garde angle on this, sampling was developing in a major way with hip-hop. When did you become aware of the genre? Did it intersect with the music you were making?

Carl Stone: It was moving along in parallel. This movement that was happening in LA and on the East Coast, I just had no awareness of what they were doing. And they certainly had no awareness of what I was doing! [Laughs] It was kind of a zeitgeist. Somehow we were exploring the same territories. A friend of mine came in with a record one day and said, “Hey Carl you gotta listen to this.” He put it on and it was Grandmaster Flash. This was ’84, ’85, and I thought, “Wow, this is interesting, where does this guy come from?” At the same time, I was doing things like “Shibucho” and “Dong Il Jang,” using turntables. I never really followed [[hip-hop] closely, but I knew it was happening and from time to time I’d tune into the radio and think, “I like this. They’re kind of up to something that’s interesting for me too.”

AD: You’ve sampled everything from Motown to Britney Spears in your work. What do you think of the distinction between  “high art” and “low art?”

Carl Stone: I don’t categorize things as high art or low art. If something moves me in some way, that makes it high as far as I’m concerned.

Carl Stone:  With pop music, I don’t listen regularly, but from time to time, just spinning the dial on the radio or walking down the street something will catch my ear and I might have some attraction to it. I was obsessed in the ‘90s with one particular cut from a “Eurotrash” unit from Denmark, “Barbie Girl” by Aqua. I used it in three or four pieces. Cher shows up from time to time, sometimes at my peril. I’ve had people walk out on me because they hate Cher and think, “This is junk, what are you doing Stone?” But I like it, so I’ll use it. Every once in a while, for whatever reason, something speaks to me. Maybe it’s the arrangement, or the production value, which on these things tends to be high. They do half the work for me, because when I tear it apart and put it together in a different way, it sounds good, just because the original material was so well produced. [Laughs] words/j woodbury

One thought on “Carl Stone :: The Aquarium Drunkard Interview”