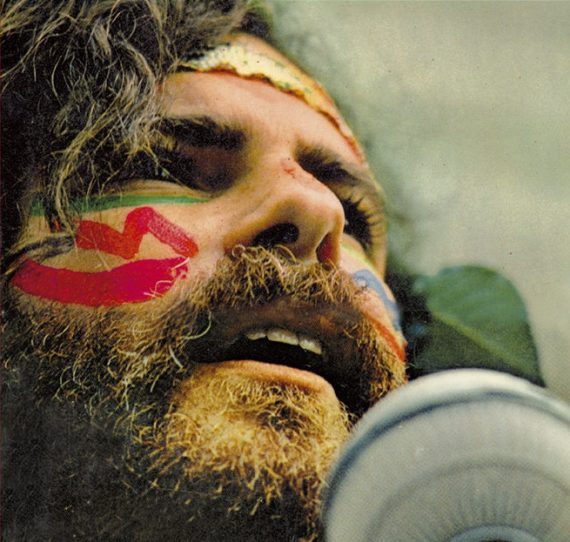 In the last years of the 1960s, pop culture and revolution felt synonymous. “The late 1960s-early 1970s were an era when on a college kid’s dorm room, there would be a poster of both Mick Jagger and Angela Davis,” said author Pat Thomas last week when we spoke with him about his book covering the rise of political provocateur Jerry Rubin,  Did It! From Yippie To Yuppie: Jerry Rubin, An American Revolutionary.

In his own way, Jerry Rubin was a rock star. The revolution may not have been televised, but it was certainly soundtracked. Following our long-form interview, Thomas offered up this Rubin-themed mixtape, featuring songs the defined an era, and Rubin’s renegade spirit:

It was pure coincidence yet simply part of the synergy of the 1960s, that during the week of late August riots on the streets of Chicago, the Beatles released “Revolution” as a single (at the beginning of that tumultuous week) and the Rolling Stones released “Street Fighting Man” as a ‘45 as the protests wound down five days later. Talk about iconic bookends!

While just shouting out the slogan, “Yippie!” was part of the soundtrack of the era, Jerry Rubin was closely aligned with many of the musicians of the day. Protest singer Phil Ochs become a friend early on, while an unknown Rubin was still marching across the UC Berkeley campus in 1965. Ed Sanders, co-leader of the infamous Fugs was part of the Yippie conclave when they started up in ‘67. Rubin encountered Bob Dylan in ’65 and again in ‘72 trying to rope the legendary bard into street-level political activism without success, and most infamously, it was Rubin who introduced the band Elephant’s Memory to John and Yoko which resulted in the Lennon’s double-album of protest songs Some Time In New York City,  in which Rubin is mentioned twice in various song lyrics and was responsible for some of the subject matter, such as the song “John Sinclair,” about the manager of the MC5. 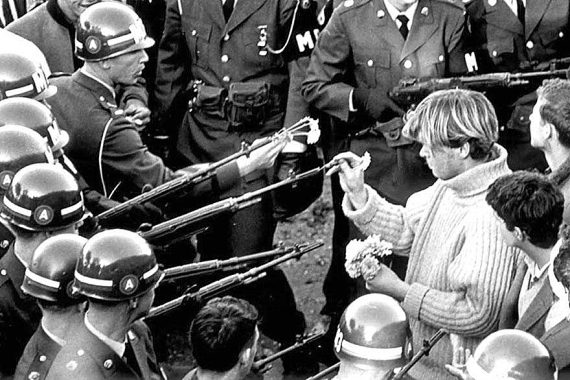 The Fugs, “Exorcising The Evil Spirits From The Pentagon October 21, 1967”

As part of the ‘exorcism,’ members of the Fugs, Norman Mailer, Allen Ginsberg, and thousands of other freaks chanted “Out, demons, out.” The image of Che Guevara, who had been murdered a few weeks prior, was flying in the breeze along with flags of the Viet Cong. Phil Ochs performed on a makeshift stage, and satanic filmmaker Kenneth Anger growled incantations underneath the platform. The cool October air carried the patchouli scent of the Summer of Love (which had peaked just months earlier in Haight-Ashbury). All the elements, when combined with symbolic images of global revolution, resulted in “ritual theater” as described in Norman Mailer’s The Armies of the Night. 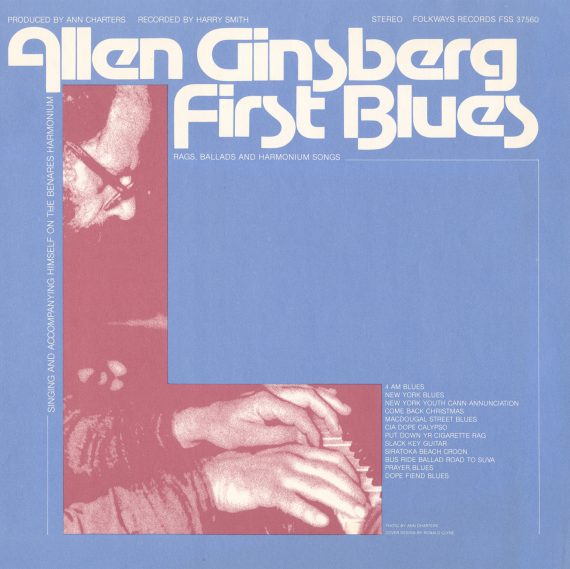 By autumn 1971, Bob Dylan had come under heat from the radical left because he hadn’t recorded any political songs in years. They wanted something along the lines of “The Death Of Emmett Till” rather than “Like a Rolling Stone” or “If Not For You.”

Dylan had returned to the Village after sitting out the last part of the Sixties in Woodstock. He was now wandering the streets of Manhattan, trying to avoid interactions with provocateur A.J. Weberman, who was intent on stalking Dylan by pawing through his garbage and accusing him of nefarious deeds in the underground press. To this day, Weberman continues to hound Dylan, posting harangues against him on YouTube. 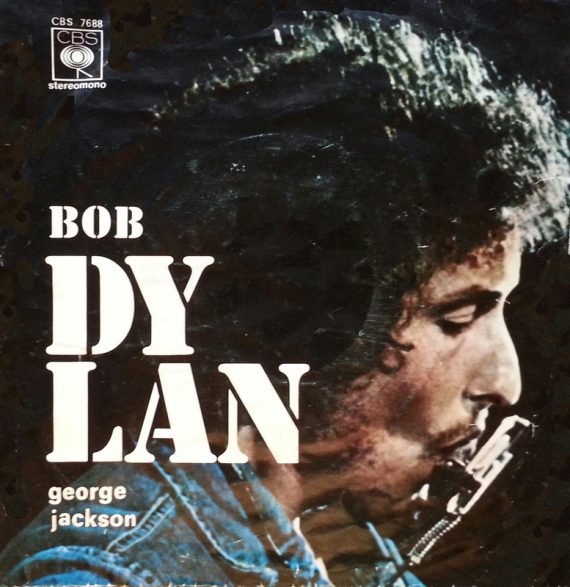 Dylan ultimately decided to collaborate with Allen Ginsberg on some political recordings. On November 17th, 1971, with lyricist Ginsberg as the primary vocalist, backed by Dylan on guitar (along with musicians like David Amram, Happy Traum and poet/vocalist Anne Waldman), they recorded the topical song “Going to San Diego,” with lyrics inspired by the announcement that the 1972 Republican Convention would be held in Southern California. Earlier, on November 4th, Dylan had recorded a classic protest song “George Jackson,” paying tribute to the black political prisoner who’d been murdered by prison guards in early August. 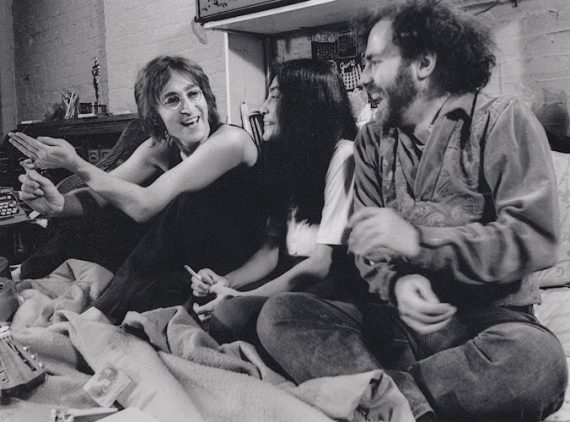 John and Yoko were now living in Manhattan and hanging with Jerry Rubin, who was energized to knock Nixon out of the White House during his ’72 bid for re-election. Lennon liked the politics that Jerry was feeding him and impressed by where Dylan was headed musically. As it echoed his own “Power To The People,” as well as anticipating the yet to be recorded Some Time in New York City album. Lennon hoped Dylan would join him in a cross-country jamboree blending music and protest to help sway the presidential race.

“Yoko told me and Abbie Hoffman that John and Yoko considered us to be great artists. Abbie replied, ‘That’s funny, we always thought of you as great politicians.'” – Jerry Rubin

The lyrics on Yoko’s song “We’re All Water” (which ends side two of Some Time In New York City) has verses that pair together an odd cast of characters: Chairman Mao and Nixon; Marilyn Monroe and Lenny Bruce; Eldridge Cleaver and the Queen of England and this wishful couple, “There may not be much difference between Raquel Welch and Jerry Rubin, if we hear their heartbeat.” 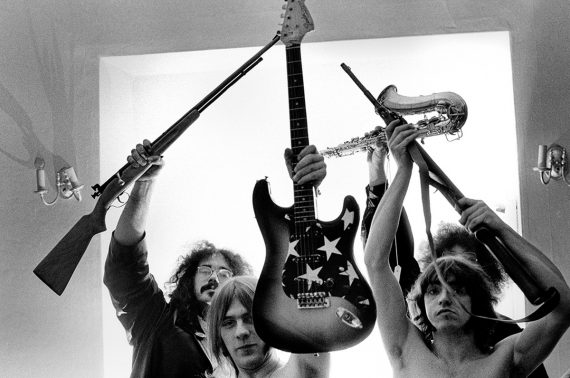 In the months leading up to the 1968 Democratic Convention, the Yippies had invited thousands of leftwing college students, hippies and outspoken radicals like poet Allen Ginsberg and novelist Norman Mailer. Politically savvy musicians such as the Jefferson Airplane and Country Joe and the Fish were slated to play, but dropped out as rumors of impending violence began to spread. In the end, the only musicians brave enough to weather the storm were those madmen from Michigan, the MC5 (managed by John Sinclair of the White Panther Party) and folksinger Phil Ochs, who was more committed to the revolution than he was to his music career.

John Sinclair and Wayne Kramer of the MC5 still enjoy a friendship with Black Panther David Hilliard to this day. The White Panther Party, despite its naî¯ve hippie drug-infused antics, was truly in awe of the Black Panther’s skills and philosophy. Musically, this was reflected in an eighteen-minute discourse entitled “I’m Mad Like Eldridge Cleaver,” which the MC5 performed at Detroit’s Grande Ballroom during 1968. In typical MC5 style, it’s an avant-garde blues-based jam, building in intensity with acid rock overtones as vocalist Rob Tyner rages.

The opening lines are, “I’m mad out on the street; I’m frothing at the mouth, pissed.” As the song builds, Tyner screams “I’m mad, I’m mad, like Eldridge Cleaver is mad!” It’s the sound of white hippies channeling the urban black man’s angst against the authoritarian system. While whites can never know the black man’s burden, the MC5 tried to empathize. “Cleaver” was a reworking of John Lee Hooker’s “I’m Bad like Jesse James.”

Another song they took from Hooker’s repertoire was “Motor City is Burning” (written by Al Smith) and included on the MC5’s seminal Kick Out The Jams. Rob Tyner adds passionate words of his own, including praising the Black Panthers for their alleged role in the Detroit July 1967 riots. 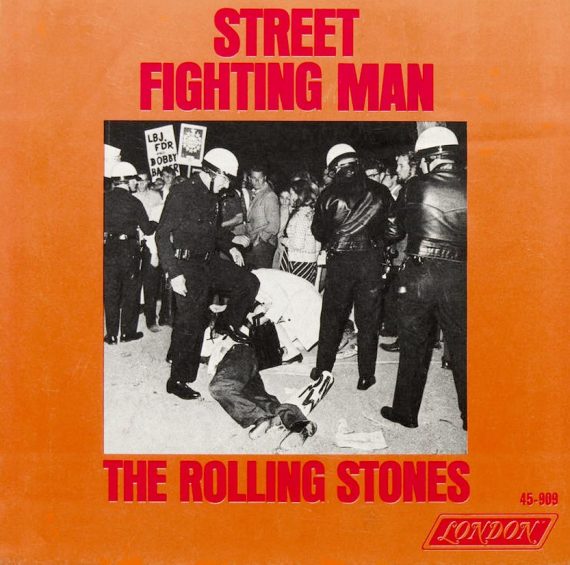 The ’68 Chicago Democratic Convention was held at the International Amphitheatre. That’s where Hubert Humphrey, Mayor Daley and thousands of delegates gathered. The Chicago 8 Trial began on September 24th, 1969. The Rolling Stones tour documented in the infamous Gimme Shelter film stopped in Chicago (sans film crew) on the 16th of November, in of all places, the International Amphitheatre! It was a Sunday night, Abbie had the “day off” so he and his wife Anita made their way backstage to greet Mick Jagger and see if the “Street Fighting Man” wanted to make a donation to the cause. (His reply was terse: he did not!). 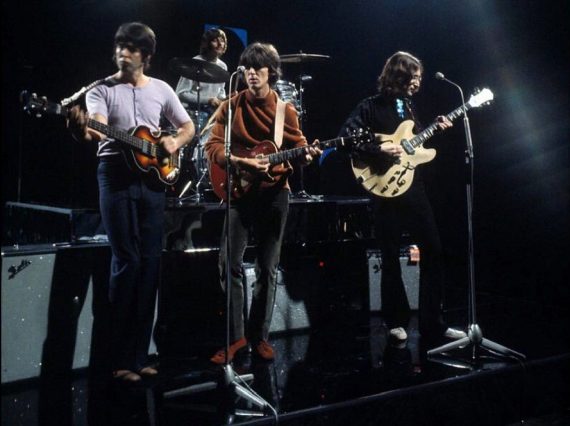 After all, “Street Fighting Man” had been released as a ’45 rpm single on August 31st ‘ 68, just 48 hours after the rioting in Chicago calmed down. Jagger had been inspired by a large demonstration in London’s Grosvenor Square, which he had witnessed first hand. The event caused quite a stir in Britain and featured speeches by actress Vanessa Redgrave and Tariq Ali, an outspoken anti-war activist in the UK. Coincidently, the Beatles released their high-energy version of John Lennon’s “Revolution” as a single on the 26th of August ‘68, some 48 hours before violence erupted in Chicago (a more laid-back version appeared on the White Album released later that year). 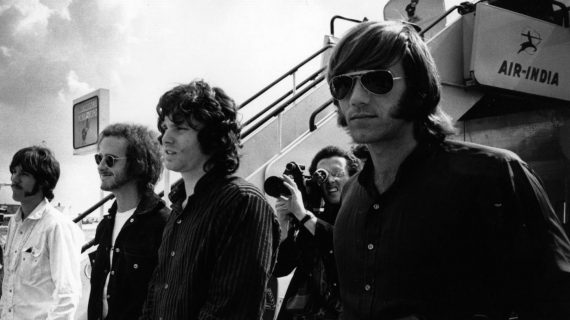 Besides a great groove, for the lyrics:

One thought on “Did It! :: A Jerry Rubin Player”