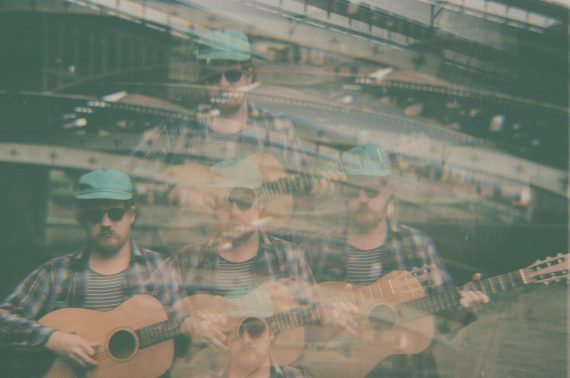 Michael Nau opens his new album, Michael Nau & the Mighty Thread, with a Wall of Sound ode to thinking you might know, but knowing you might not. “Now in the middle summer/I’m thinking about the universe,” Nau sings, his husky baritone floating over shimmering guitars. “I think I know how it works/But I’m a bit less than positive.”

It’s in that liminal space, between getting it and totally not, that Nau’s best songs live. You might not pick up on the dissonance at first, as the 11 tunes that make up the album are all shades of “chill.” “No Faraway Star” shimmies like Phil Spector invented dream pop; “Funny Work” shuffles like Bobby Charles; “Can’t Take One” sounds beamed over from Planet Hazlewood. The pervasive warmness that defined Nau’s work with Cotton Jones and Page France is still here, but listening closer, it becomes clear how often beautiful complications bubble to the surface. “There’s no second-guessing the real,” Nau sings on “Funny In Real Life,” before shading the resoluteness with a little doubt: “I don’t ever know how I feel.”

Recorded in collaborator Benny Yurco’s apartment studio in Burlington, Vermont, over the course of “four or five days,” Michael Nau & the Mighty Thread is Nau’s most “band-oriented” solo outing. Most of the songs were cut live. First or second takes ended up on the finished album. Much of Nau’s solo work has been exactly that – assembled on his own – but the new record gave him the chance to lean on a wide cast of other players, as well as digging into his songbooks for songs and ideas that had been long abandoned. “Just having other people to play them with you, to do their thing, it just feels more like I’m a singer of a song,” Nau says. “It just feels like I can step outside of it a little easier, instead of hearing 50 of me in the same song.

We caught up with Nau to discuss building this record live, how that immediacy shaped the songs, and how doubts fuel his seemingly carefree jams.

Aquarium Drunkard: This is a very natural sounding record. Most everyone I know has a low-grade anxiety going at all times now; we live in perilous seeming times. But this record feels like a respite from that, something that accentuates some peace. Does music provide that sort of space for you, somewhere to decompress?

Michael Nau: Absolutely. Playing music is that for me, hanging out with that group of guys. We can just sit in a room and give ourselves a task and work together on something. For those few days, I was there doing that. I can’t go back to it for that sort of peace, but while it was happening, I felt that in my world for a minute.

Michael Nau: I don’t really know. A lot the songs, they’ve been around for a while. There have been times on past records where I’ve wanted something to feel cohesive, but with this one, I was picking from all over the place. Maybe that makes it all make sense – I feel pretty detached from a lot of the songs. They’re songs that didn’t make the cut for various reasons on other records, and for some reason, they popped back into view with this particular session. There are two or three songs written [in the time] leading up to the sessions, but other than that…most of the songs I’d never even thought of in the last five years. But you’d wake up and think, “I don’t really have a song to do,” and one would come to mind out of the blue. We’d play it and if it worked, it worked. As far as my attachment to the songs, I felt like I was singing songs from the past. They happened somewhere else. This was my “performance” of them.

AD: At one point you sing about not second-guessing “the real,” and you follow it up with a line about not knowing what’s real to begin with. Does perception shade how we feel experience realness?

Michael Nau: I just go back and forth on a daily basis on what I feel to be “real” in what I’m doing. That song…it might mean one thing to me today, another tomorrow. With a lot of these songs, I feel like I’m still figuring out what they are.

AD: Do you ever feel pressure to have it figured out before you release a record? Or is the process of untangling these songs after the fact part of your process as a songwriter?

Michael Nau: For a while, I really worked hard on trying to get to a place I seemed to never really get to, this place of “this is finished, I know what this is. This should be put out into the world.” But now, if I needed to feel that way before putting out a record, I’d still be working on it. After the last Cotton Jones album, I [felt like] I’d worked in music so long, I didn’t think anything was worth or meant anything. I realized I was never going to feel good about any song I wrote. I do whenever I’m doing it, in that moment, but trying to get it all together to be one thing, man, I don’t know, I get pretty anxious.

I think I’ve gotten a little bit better at not needing to know, why these songs are there or whatever. It feels good to play them; I like the process of recording music. That’s why I started playing music. [But] I started to feel like it needed to be something more and I got really lost during that process of needing it to be something more. That was part of the reason for us doing an album where I didn’t need to think about anything, we just played the song. I had a group of people who said, “Yeah, this is done” and pushed it to the end. I took myself out of the equation.

AD:  Has your comfort level with songs being out of your hands increased the longer you’ve played music?

Michael Nau:  I definitely needed to let go of a lot of my control over what I was doing just to be able to enjoy it. That was sort of missing for five solid years. I’d make music every single day, and love doing it, but it was also what brought me so much anxiety and struggle, for whatever reason. It was just my whole life. I had to let that go to be able to move forward at all.

AD: Did you learn anything about your own songs making this record that surprised you?

Michael Nau: When there are other people there, you instantly know at least how four people feel about a song you’re doing.

Michael Nau:  The way we’d do it is, I’d get through a verse or a chorus and the band would just start playing it. We’d rehearse it for the duration of the song and then just record it. A few didn’t work, but the band is very capable, and if a song didn’t work, I just let like the song wasn’t any good. If these guys can’t make it good, and we’re not all feeling good about it, the song just isn’t good. Just to have somebody tell you, “Man, that song’s not working, let’s move on.” Sometimes, I’d spend a week on a song and realize at the end of the week it’s terrible. It’s nice to know pretty quickly. words/j woodbury

One thought on “Michael Nau :: The Aquarium Drunkard Interview”