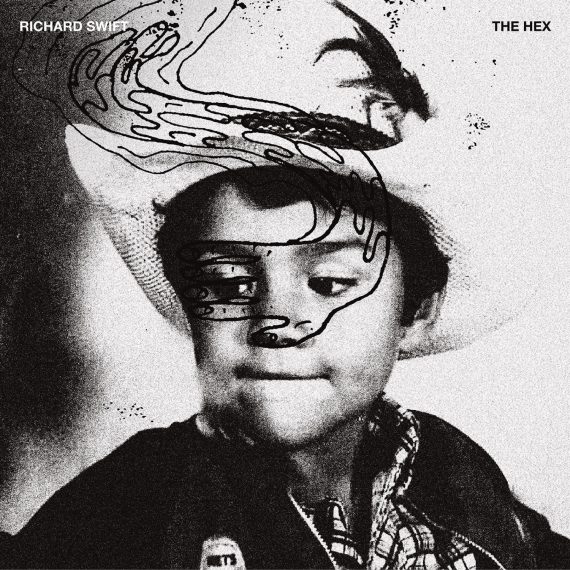 Richard Swift was no stranger to singing about death. “Everyone knows when they’re gonna die,” he crooned, nearly a decade ago. Though absurdist comedy often obscured the fact, death loomed over many of Swift’s best songs. In them, tombs were sealed up, ages came to an end, and people were left behind to cry in the wake of innumerable tragedies. I don’t believe Swift knew when he was going to die, but clearly, he thought a lot about the fact that he would, like we all will. I think that’s what he’s singing about on The Hex, his final record, recorded over the last couple years and finished just before his all-too-early demise. “Changing seasons young into old/turn a diamond back into coal,” over a churning bass and clattering percussion. “The hex, the hex, the hex,” he whispers like a ghost. The hex for Richard Swift, the hex for me and you.

Swift died on July 3rd, leaving behind a body of work as a performer, songwriter, and producer. It’s impossible not to hear his final lp without pangs of recognition. His passing, complicated by his alcoholism, hovers like smoke over the album, threatening to smother the sounds gathered here in sadness. But mournfulness on a Swift record always existed alongside absurdist glee, and The Hex is no exception. No polite note from the great beyond, it’s as weird, ragged, and messy a record as he’s ever made, encompassing scuffed up garage rock, banged up soul, hissing funk, and obscured piano pop. Fueled by rage and existential longing, it’s too ornery a record to sound anything other than totally alive. “Got the strength, believe it or not/every second is a battle I fought,” he sings, mired in self-destructive woe on the “Dirty Jim.” It’s a harrowing song, ugly truth complicated by breezy presentation. “Every color now is shining through,” Swift sings, turning bad into beautiful.

In the years leading up to his own death, Swift’s mother and sister passed away. Those losses inform the rawest and most personal songs of his career. “Never spilled so many tears,” Swift sings over a decaying synth on the Bowie channeling “Nancy.” “She’s never comin’ back,” he howls, crystallizing the sharp hurt of irrevocable loss. Swift always knew how to break a heart, but this is another level, like a firing nerve. “Sister Song” is no less affecting. It’s lovely and lilting (though Swift’s drums, as always, seem to weigh a ton), and it exhibits the songwriter’s concise poetic voice: “I wish it wasn’t so sad.”

As his mixtape for Aquarium Drunkard made clear, Swift understood vibes, and “HZLWD,” is a mood. It takes next to no effort to imagine Lee himself stepping up to the mic to deliver some spacey cowboy mysticism over the languid, cinematic groove. If “HZLWD” is some sun-dappled silver screen dream, “Kensington” is its horror show cousin. His spoken word vocals mostly obscured by fuzz guitars and drums, Swift accomplishes all the demands of the narrative with a blood-curdling cackle and frantic raving: “A sequence of echoes, bang!”

Richard Swift was one of a kind. He could write sci-fi instrumentals, songs for speakeasy séances, open-hearted hymns, blown out rockers, and crack up comedies. And he could write a love song. In its own way, I think that what the album’s final song, “Sep20,” is. September 20, 2018, would have been Swift’s 21st wedding anniversary, and on that day, in accordance with his wishes, his family scattered his ashes in Oregon. “Calling out, can’t hear your name,” Swift sings, over rolling barroom piano that could have been played on his debut, The Novelist. It’s no comforting lullaby—”When I go/I’ll go out alone,” Swift sings—but I think it’s about the measures we take to keep alive for others, the reasons we try “not to drink from the poison well.” Richard Swift sang songs about death and he sang songs about being alive. “Sep20” is both, about hanging on until the end. “All the angels sing/que sera, sera,” Swift sings, “Death do us part/sickness and health.” The last sound his voice makes is wordless, a spectral oooooh, rising up, distorting slightly, and then a whistle. So it goes. words/j woodbury

One thought on “Richard Swift :: The Hex”